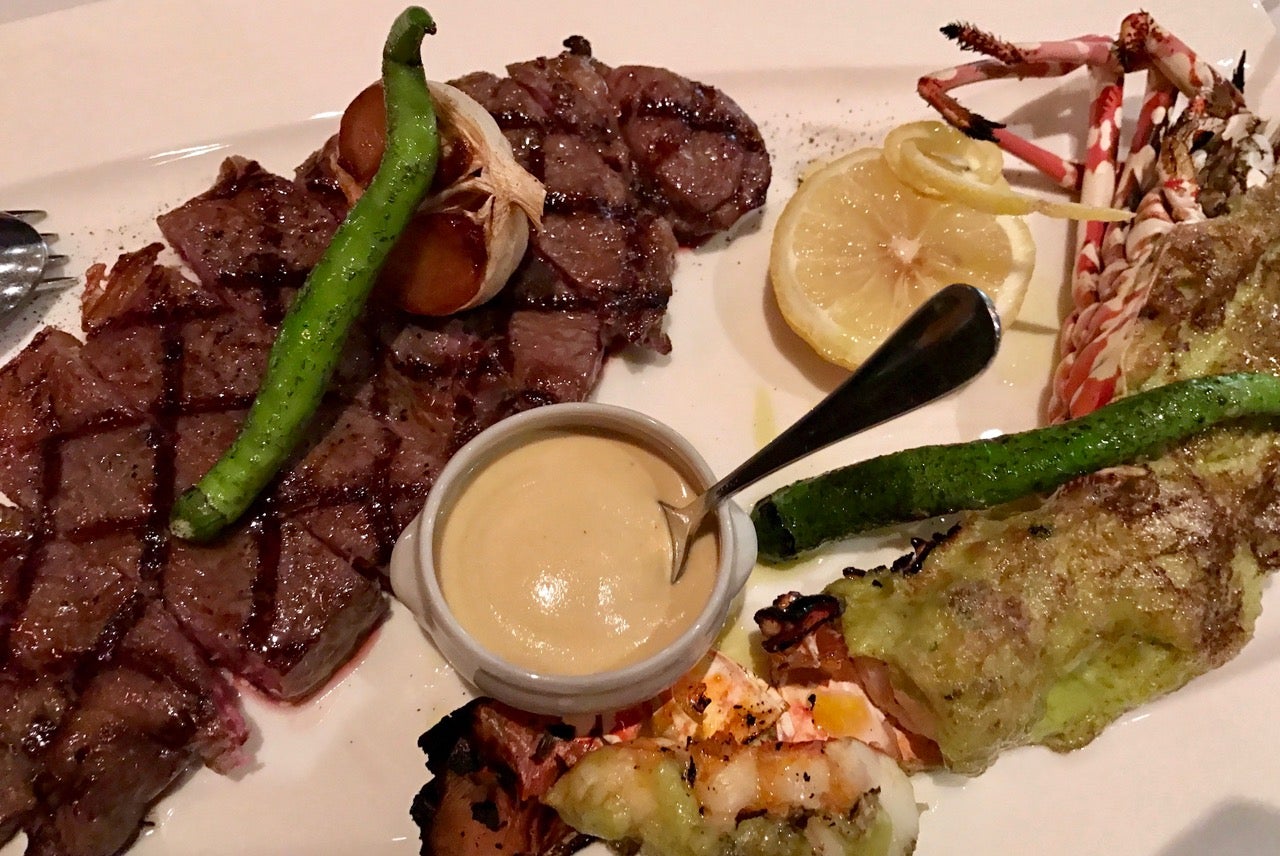 A3 Wagyu and lobster gratin at Ruby Jack’s

Hummus that’s worth it; steakhouse many haven’t discovered

The latest restaurant to join the increasingly crowded range of offerings available in the Poblacion area has the curious distinction of being the highest rated restaurant in Makati on TripAdvisor—No. 1 out of 1, 076 restaurants rated, in fact.

For us who live and eat in Makati, that this place is rated higher than Blackbird or Toyo or Your Local is testament to the fallibility of TripAdvisor as a guide to restaurants or as a resource for travelers, in general.

TripAdvisor is like a comments section without a lead article, a mob rule by puerile and uninformed pundits who have parachute experience of a city. Looking at how the establishments and sights in your city are assessed by TripAdvisor gives a clue to what kind of guidance you’ll get if you plan your trip to a city you don’t know based on its reviews.

Having said that, I can now say that while Hummus Elijah might not be the best restaurant in Makati, it’s pretty good; its ranking simply underscores its popularity among digitally literate travelers.

I’m sure that both establishments will chafe at the comparison to Beni’s, but it’s inevitable because two of the city’s best falafel restaurants are within spitting distance of one another.

I’m most certainly not a falafel expert, but I can definitively say that the two are certainly highly dissimilar; which one you think is better will ultimately depend on your personal tastes.

The star at Hummus Elijah is, unsurprisingly, the hummus, and it is here that it has a clear advantage over Beni’s.

The platter of hummus is smooth, creamy, flavorful, and holds its own as a dish rather than just a forgettable bland component of a meze spread or as lubricant to a falafel sandwich. I never thought I’d want to eat that much hummus; but really, it’s that good.

Elijah also has the advantage over Beni’s of being less dingy: the cheap and cheerful wooden interior could be a backpacker’s haven anywhere from Nepal to Istanbul, but it’s clean and well-lighted.

There’s also a little kiosk in case you feel like buying dried parsley by the kilo.

I would argue about it being the number one restaurant in Makati, but it’s certainly worth a visit. Those who drive to the restaurant should be warned that there’s nowhere to park near it.

On the other side of the spectrum in terms of price, Ruby Jack’s is a undeservedly neglected steakhouse in City of Dreams. My wife and I were invited by the manager, Thiago Harada, so the usual disclaimer applies: we dined as a guest of the restaurant, who knew that we were coming and our affiliation with this newspaper. But we tried to order what we would have ordered had we been paying for the meal.

Ruby Jack’s is a steakhouse in the classical tradition by way of Tokyo, where the original is located. In the same way that Harada speaks perfect English with just the slightest inflection, there are just a few touches that remind you that the cows come by way of the rising sun.

The biggest giveaway, of course, is that their speciality is the A5 Wagyu Steak. There is some controversy whether wagyu is best eaten as a steak; for us who grew up in the 1980s, the ne plus ultra of luxury was a “Kobe beef steak.”

We know more about the different varieties of wagyu now, and Manila is almost embarrassing in its exhaustiveness of wagyu available for consumption; surely no other developing country has as much richly-marbled beef available to try and compare?

I feel that A5 Wagyu is best eaten in very small quantities seared as tiny cubes on hot stones, rather than as a steak; but I was very open to trying a steak of A3 Wagyu (less marbling) along with a host of their very interesting appetizers.

The prices at Ruby Jack’s are startling, but so are the portions: my recommendation is to get half portions for sharing, except perhaps for the foie gras, because, well, there’s no such thing as too much foie gras.

The Japanese tomatoes from Chizoka Prefecture were as sweet as promised; the scallops were thick but cooked to perfection. Only the Caesar salad was a little odd: in Manila we’re used to the leaves being drenched in a pomade of garlicky sauce, but these came as little cups filled with Caesar-tasting dust. My wife liked them; I was looking for a slathery experience.

The steak was excellent. Our only regret was that we didn’t get two steaks; we wanted to try the lobster, which was plump and very fresh, but came with a whole lot of sauce on top which it didn’t need.

We’re looking forward to a lean fillet of US beef for our next visit, to see how they fare with less exalted cuts.

The desserts are just the right size to cap off a large meal, and not overwrought.

Throughout the meal we were wondering why Ruby Jack’s isn’t more popular than it is. It may be the location, both in terms of being far away from the 1,076 restaurants of Makati. If it were one of the 70 restaurants that open in BGC every year, I think it would stand out, though Atelier Vivanda dominated the high-end beef in that area.

Or it might be the location vis-à-vis City of Dreams in general: it’s not ensconced within one of the hotels, but is part of a generic mall-like area above the main gaming floor.

The real reason may simply be that there are too many steak restaurants in Manila operating at this price point, and the differentiation might be smaller than that which justifies driving to another part of town to try a little variation.

I find myself going to Prime 101 out of habit, though in theory Smith and Elbert’s are closer; my wife and I end up going to BGC (where Raging Bull is located) a lot because she works in the area.

All the establishments I’ve mentioned fire their steaks with remarkable attention to detail and prepare excellent sides; all of them have a bit of a problem with the parking. With the traffic the way it is these days what might influence your decision most is where your friends happen to be that night. But if you’re in the bayfront area then Ruby Jack’s is definitely worth a visit.