‘Wicked’ is winging its way back to Manila | Inquirer Lifestyle ❮ ❯ 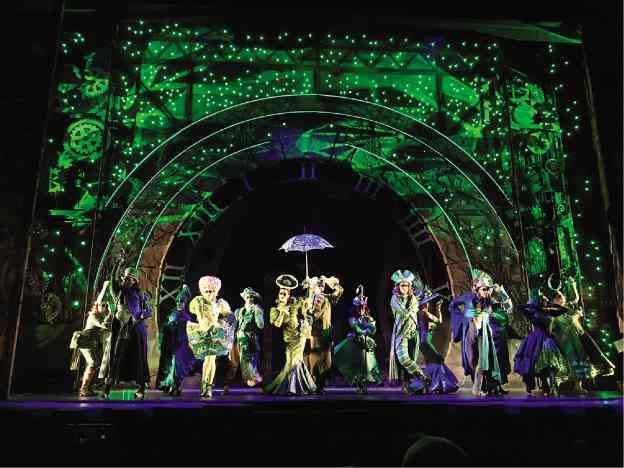 One Short Day scene in “Wicked,” the musical

‘Wicked’ is winging its way back to Manila

I wear costumes all year round, not just on Halloween. Just last month, I enjoyed dressing wickedly green at the gala premiere of “Wicked” at the MasterCard Theatres, Marina Bay Sands, Singapore.

“Wicked,” the Broadway and West End musical phenomenon, acclaimed as “one of the greatest musicals of our time” by the Daily Mail in the UK, is once again flying back into Manila in February 2017. After its successful run here in 2014, the production is coming back direct from a multi-record-breaking tour of the UK and Ireland, and will play at The Theatre at Solaire for a special limited engagement as part of a major international tour.

Opening to rave reviews when it premiered in Manila, the show had a successful seven-week run, attracting sell-out audiences.

I remember my first cameo “Wicked” experience onstage, when I presented the donation of the production and cast—the proceeds of one night’s performance to survivors of Supertyphoon “Yolanda.”

The check was handed to Juliet Romualdez, mother of then Rep. Martin Romualdez of Leyte.

“Wicked” is playing its 13th year on Broadway to packed houses, while at the Apollo Victoria Theatre in London’s West End, it celebrated its 10th anniversary last month.

Around the world, the spellbinding show has been seen by over 50 million people in 14 countries, and is the recipient of more than a hundred major awards, including three Tony Awards and two Olivier Awards.

“Wicked”—based on the best-selling novel by Gregory Maguire that ingeniously reimagined L. Frank Baum’s stories and characters in “The Wonderful Wizard of Oz”— is about the untold story of an unlikely but profound friendship between two sorcery students: a popular blonde girl called Glinda, and a misunderstood, green-skinned girl named Elphaba.

Their extraordinary adventures in Oz will ultimately see them fulfill their destinies as Glinda The Good Witch and Elphaba as the Wicked Witch of the West.

“Wicked” has music and lyrics by Stephen Schwartz, book by Winnie Holzman, and direction by Joe Mantello, with musical staging by Wayne Cilento. The Manila run opens on Feb. 2, 2017 at The Theatre at Solaire. Tickets are now on public sale and are available at www.ticketworld.com.ph and all TicketWorld outlets, or call tel. 891 9999.

Presented by Lunchbox Theatrical Productions and Concertus Manila, “Wicked” is set to delight and dazzle theatergoers of all ages.

Headed by James Cundall, Lunchbox Theatrical Productions is one of Australasia’s leading producers of live entertainment, and over the last two decades has created a reputation for bringing top international productions across five continents.

Concertus Manila, one of the leading promoters of live entertainment in the Philippines, has been the local partner of Lunchbox since 2004.

For the Fila Game Changers Listening Party last week, I put on another kind of costume— sporty chic using the latest Fila collection.

Fila, the global lifestyle apparel brand, celebrated the launch of its new song  “Change the Game.”

Sung by rapper Cogeta, the music video was shot in LA with scenes of people in the streets in their element playing basketball, biking and skateboarding on various ramps.

To bring the LA vibe to Manila, the track was brought to life during the event, thanks to the Philippines’ rap royalty Abra who performed his own rendition of the Fila song.

Besides having Abra’s performance to work the crowd of over 200 energetic attendees at The Brewery at The Palace, the event was also graced by

Fila ambassadors and game-changers such as model and host Fabio Ide, eventologist and host Tim Yap,  and Harry Morris of the Philippine Volcanoes, the Division 1 Rugby Champions of Asia.

Tim hosted the Game Changers Listening Party with up-and-coming actress Sarah Carlos. The music video launch also had fun games and prizes for all the guests.

A fun interview with Cris further explored the behind the scenes of their LA adventure.

The Fila ambassadors are all game changers from various backgrounds. Fila is truly a brand focused on game changers in any passion.

Check out the track on Spotify or the music video by searching “Fila x Cogeta— Change the Game.”

The Zonta Club of Makati and Environs proudly brings “Filipinaz Fair 2016” to Yuletide shopaholics everywhere. This bazaar has for years been known as one of the most well-curated shopping festivals in town.

“Filipinaz Fair 2016” will showcase furniture, home and Christmas decor, haute couture and accessories. A highlight of the bazaar will be the sale of certified, limited-edition Anita Magsaysay-Ho prints from the artist’s “Madonna of the Sea” series.

The bazaar is the only one created by women specifically for women’s advocacies. All proceeds will be used to further the many women-empowering projects of the Zonta Club of Makati and Environs (ZCME).

ZCME seeks to uplift the lives of women and girls through advocacy and projects such as health services, skills training, livelihood generation and values formation.