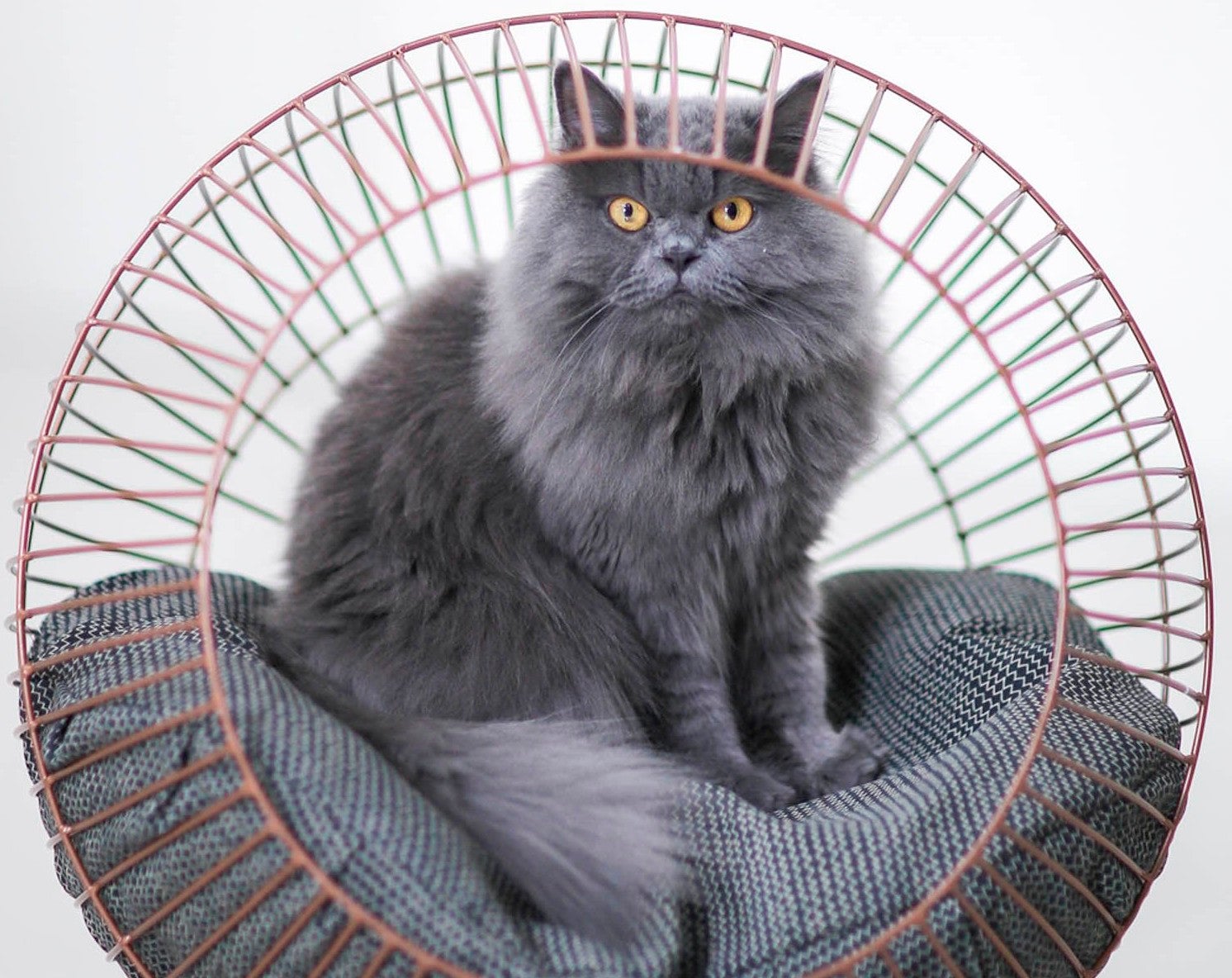 The Instagram superstar, Panther the Cat, in his cat cavern. —PHOTOS BY JOHN PAUL R. AUTOR

Panther, a blue doll-faced Persian cat, looks wistfully out the window at the street where stray cats roam free. When they disappear from sight, he strains his neck to catch one last glimpse.

“He’s not much like a regular cat. He’s friendly and very curious,” says Carmen Goetz, Swiss freelance fashion photographer and mom to Panther.

True enough, Panther doesn’t skitter away, like most cats do, when strangers enter the house. Instead, he gives them a long sniff before passing judgment. Give him a few more minutes, Goetz says, and he’d warm up to the visitor.

He runs around the house, plays hide-and-seek, and often pretends to play like he has a playmate.

“In fact, each time we come home he’d be waiting by the door like a dog,” Goetz says, laughing. Even more remarkable is that Panther also knows a few dog tricks—he responds to “sit,” “come here,” “high five” and “Panther.”

Indeed, this two-and-a-half-year-old amber-eyed cat lives an extraordinary life. He’s an Instagram superstar, a kitty litter brand ambassador, a model, gets a ton of freebies, and is just an all-around great cat.

Goetz, with Filipino hubby Jon Blaylock, first saw Panther on Sulit.ph. They had no plans of getting a cat, but Goetz said it was love at first sight.

“We’d spend a lot of time watching cat videos and when we saw Panther, we just fell in love with him. We named him Panther after my favorite childhood stuffed toy,” she said.

Every morning the cat wakes up the couple by kneading wherever he feels like it, or by using his paws to touch the face, or meowing as a last resort, Goetz says.

She finds him affectionate and attention-seeking, likes to sleep in their bed at night and follows them around the house.

Panther’s rise to fame in Instagram began last year when Goetz decided to create him an account. He gained about 600 followers, she says, but it was not until Panther was featured on Cats of Instagram, a popular feed with more than 7 million followers, that he gained thousands upon thousands of followers.

Since then, this fluffy little kitty has been featured in magazines like Metro Pets and Animal Scene, and even got an entire page in the Paris-based cultural and trendy mag 90BIS. He is now also the Top Cat (ambassador) of Meow House and Feline Fresh.

Come November, Panther will be featured in a book titled “Insta Grammar Cats.” He also models for Petstages, a US brand of cat toys, Fit Cat Toy and Casetify (phone case). He has even successfully rolled out his own limited-edition socks.

On top of that, he gets freebies from around the world, including UK’s Catzebox, the US’ TrackR (cat tracking device), and Australia’s Boom Collective (mobile phone app with Panther emojis).

Not bad, considering Panther is the first pet Goetz has ever had.

What started out as simply sharing photos of her cat now feels like a part-time job.

“I never thought it would make a difference, that I could actually grow his Instagram. But it was worth the try… Today, I spend about five hours a day interacting with other cats and dropping comments on their posts,” she says.

But it’s not all a bed of roses. There are times, she admits, when she’s tired from work.

“But it’s now a part of my life, that once a day I upload a picture. It’s constantly on my mind. I often think ahead, for Halloween and Christmas. It takes about 10 minutes per photo session. Sometimes I play with him while shooting,” Goetz says.

She also makes sure to post on three cat websites to promote Panther’s page.

She’s planning to print some business cards for Panther, for when the couple goes abroad.

It might seem like it’s all about promotion and marketing now, but Panther is first and foremost a spoiled cat loved to bits by his human parents.

“He’s nocturnal. He doesn’t scratch so much or bites. He nibbles. Sometimes we bring him to work, at Jon’s office in Marikina. We’re thinking of bringing him to parks to get him used to the outdoors,” says Goetz.