‘I wish I had spoken with my child sooner about sex’ | Lifestyle.INQ ❮ ❯ 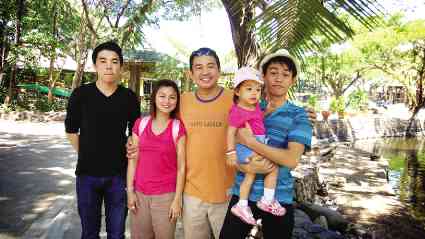 ‘I wish I had spoken with my child sooner about sex’

‘Mama, why did you cut off your bird?” asked my 5-year-old Jack. After the laughter died down and an age-appropriate explanation for why I didn’t have a penis was given, I realized it was time to educate my son beyond the cutesy names for body parts.

While I’d also coached him on how no one should touch or see his private parts except for his parents or at the doctor’s, beyond that, I wasn’t really ready to explain more.

My Internet scrounging led me to purchase a digital copy of the e-book “The Talk: 7 Lessons to Introduce Your Child to Biblical Sexuality” by Luke Gilkerson (US$47 or about P2,200 from intoxicatedonlife.com). It included an online video course that I could watch with my husband.

The material is for Christian parents, but the information provided is very practical. I appreciated that it was direct, not preachy and provided a script of what to say and do over the course of several days.

The 45-page book is for kids ages 6-10 and introduces the male and female anatomy, how babies are made, and why it’s best to wait until marriage to have sex.

A number of parents wonder when their child is ready. There is the fear of disclosing too much information—but in this age, is that a bad thing?

Focus on the Family’s book, “The Complete Guide to Baby & Child Care,” says: “Giving a child facts about reproduction, including details about intercourse, does not rob him of innocence. Innocence is a function of attitude, not information… But a child who knows very little about sex can already have a corrupt mind-set if he has been exposed to it in a degrading, mocking or abusive context.”

By the time we’re ready as parents to have “the talk,” it might already be “too little, too late” in terms of values we’d like to instill in our kids.

In “Parenting the Internet Generation: A Blueprint for Teaching Digital Discernment” (also by Gilkerson), teen girls spoke of how boys expect porn-style sex in real life. “Gone are the days of curious preteens stumbling on a father’s ‘stash’ of magazines in the closet. Boys and girls now consume hardcore online video material en masse.”

So what can we do to protect our kids and prepare them for a world without blinders?

“With the world screaming sexual messages at children, the last thing they need is their parents’ silence about sex,” said Gilkerson.

Why as early as 6 years old? Gilkerson explained, “Behavioral scientists notice that from 6 to 10 years old, peer relationships become more valuable to children than before. For many children, this is the age when they start attending school, and with school comes the influence of their peers. Because of this, it is important to establish yourself as a source of information about sex before their peers do.”

“I learned about sex on my own, from physical education sa school, and by watching X-rated movies on Betamax. My cousin let me watch when I was 13,” shared Jason, 42, dad to Joshua, 21; Jonas, 17; and Julia, 3.

His folks didn’t talk to him about sex. “But it was very awkward watching a movie at home,” he recalled. “Especially when it came to a love scene. I would just look away ’pag sexy time na.”

Has he spoken to his kids about “the birds and the bees’”? “Yes, to Josh, when he started going out,” said Jason. “I didn’t have to explain everything; in general, I told him not to wind up getting someone pregnant.”

Would he rather his parents had talked to him about it before? “Not really,” he said. “I guess it differs from time to time. Back then, discussing sex wasn’t as open. But lately, people have opened up, thanks to the Internet. Nawala ’yung taboo.”

Jason plans to talk to his younger kids when they start going out, too. “At around 17 siguro, or as soon as lumabas na sila unaccompanied by a parent.”

His wife Cherry feels otherwise. “She’s the one pushing me to do ‘the talk’ as early as possible,” he admitted.

Louise learned about how babies were made from media and her friends. “At 14, my friends gave me the idea that sex is done by adults,” she said.

Her parents didn’t give her “the talk.” “We talked about it when I was already in college, but more on the risks of getting pregnant,” said Louise. “It was always an awkward topic, but now, I wish we were able to sit down and talk about it in a more informative way.”

While they still haven’t spoken to their kids, Meng and Louise plan to begin with their eldest this year.

The beauty of it

“Looking back, I wish sex had been more of an open topic —not so much the scary warnings, but more on the beauty of it,” said Louise.

“Mostly about the process of conception, but I didn’t really get how the act of sex was done,” said Bong.

“I don’t remember my parents giving me ‘the talk.’ I think it would have been okay if my dad talked to me about it, but by the time he was giving advice about not getting a girl pregnant, I think he figured I already knew about the birds and bees.”

Bong hasn’t spoken to his boys about sex. “I think rather than sit them down for a long talk, I will be dropping nuggets of advice about being a responsible partner and parent. I think there is enough accessible information from school and media about the biology of sex.”

He believes that his role as a father is to teach self-control and responsibility. “And, to tell them of the possible consequences,” said Bong.

Single mom Chris, 36, has been proactive. She started giving the sex talk when her daughter Yvonne was 3.

“I wanted her to be aware of the concept of ‘good touch’ and  ‘bad touch,’ what kind of touch is okay and from whom. As she got older, I told her why. I introduced the concept of private parts and explained the idea of private, not to show in public, the reason behind having clothes. Then later on, I told her about sex and explained how it is a gift from God. I think she was almost 7. When she was 8, I also explained to her what rape meant,” said Chris.

Chris learned about sex in school from her teachers when she was 9. Her parents didn’t give her “the talk,” either.

“I’m glad because I think I would have felt awkward if they did talk to me about it. I already know now that they were not equipped. Feeling ko late na kung kakausapin nila ako, mga 12 years old siguro. But it was that experience that allowed me to think of the best way to do it with Yvonne,” said Chris. “I had the chance to read articles on protecting children and teaching them to be aware.

“I am happy to be the first to tell Yvonne about sex so she will appreciate it as a blessing, and not as the world sees it.”

Is there anything she wishes went differently with the way she learned about sex? “I understand that my parents felt awkward about it. My faith and the school helped me understand sex as something good, and not evil.”

As Gilkerson put it, “Sexual education isn’t just taught. It is modeled. Married parents should model what romantic love looks like—honoring and cherishing one another. Teaching children about sex is not a one-time thing.—CONTRIBUTED