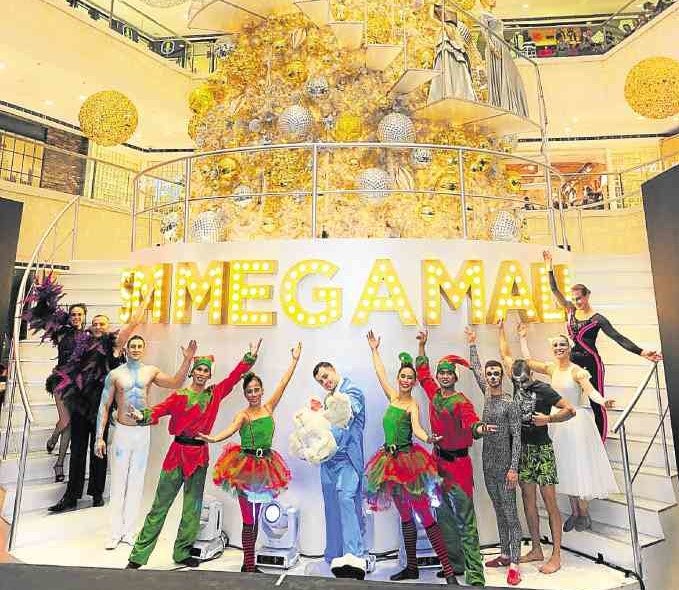 Christmas is the merriest time of the year, and truly the longest celebrated holiday in the Philippines. It’s the season when families go malling and shopping with gusto.

Everything was merry and magical at SM Megamall as it ushered in the holiday season with the launch of the mall’s gleaming 30-foot Christmas centerpiece. The much-awaited attraction of the season was highlighted with “Sky of Snow: A Christmas Circus Show” at Mega Fashion Hall.

Presented by SM Megamall, the original Christmas show was performed by Aurora Borealis Productions, in cooperation with Crystal Events. The acrobats and dancers delighted guests as they depicted a story about love and friendship.

“Sky of Snow” included child-friendly circus acts such as an aerial show of the Lady in Red, the mascot Mr. Snow Bear, and Balloon Boy Fairy, to name a few. This show kicked off many exciting events at SM Megamall.

Beauty, fashion and art will all come into play this holiday season, starting off with a lipstick exhibit by MAC Cosmetics all weekend, an Yves Saint Laurent photo exhibit  by Pierre Boulat on the first YSL collection in 1962 on Nov. 23-30, and pop-up shops of Jo Malone and Estée Lauder at Mega Fashion Hall.

Other fun Christmas events include a performance of Superdudes with Super Santa, and a bewitching Harry Potter Holidays display at the event center.

Christmas is also about bringing back and sharing love and compassion. Last month, top fashion designers, models and muses came together to create awareness and raise support for ICanServe Foundation and its advocacy of awareness and early detection.

Before the main fashion show, I hosted a lively auction to generate more funds for this worthy cause. The auction items included trips to El Nido, Pearl Farm and Amanpulo, and gifts from Stores Specialists Inc. and Kenneth Cobonpue.

I spoke to Derek backstage and congratulated him for “The Escort,” his sizzling hot movie with Lovi Poe. Belo Beauty owner Vicki Belo hosted a special premiere for her Belo endorsers at Greenbelt’s My Cinema.

Other notable names who walked the ramp were actor and Sun Life Ambassador Matteo Guidicelli for Lustico, and beautiful Heart Evangelista-Escudero, who closed the show wearing Bumgarner.

Over the past decades, ICanServe Foundation has made great progress in spreading awareness, all with the help of various partners. This year’s partner was Philip Stein watches, and the event was copresented by Sun Life Financial. Other sponsors included Security Bank, Del Monte Philippines, Marie France, Pagcor, The Medical City, Globe Platinum, Mercedes-Benz, Estée Lauder and Jewelmer Joaillerie.

Which is a fantastic way to segue to Jewelmer’s latest  milestone, its commemoration at the lobby of Mitsukoshi Nihonbashi Department Store in Japan.

Established over 300 years ago, Mitsukoshi caters to a high-end market carrying only the most prestigious of luxury brands such as Boucheron, Cartier, Bulgari, Mikimoto, Graff and Tiffany & Co. And now, of course, Jewelmer Joaillerie.

Japan is known for being the pioneer of the cultured pearl industry, with a long-standing affair with pearls. The symbiotic relationship of nature, the elements and the innate beauty of the pearl have become the inspiration for Jewelmer’s team of designers and master craftsmen to create exquisite jewelry, and for Mitsukoshi Nihonbashi to feature the special story behind the brand.

Along with reigning Binibining Pilipinas Universe Maxine Medina, Jewelmer represented the country with pride as they showcased the latest pearl collections at the lobby of the department store.

Through a photo exhibit, guests  also had the opportunity to see the pearl farms and their people in Palawan, working with nature to create a living gem that has been a symbol of the country and the Filipinos.

The economic and cultural significance of the South Sea pearl was made official by former President Fidel V. Ramos in 1996 when he proclaimed it the Philippine National Gem via Presidential Proclamation No. 905. Our country is one of the few in the world that can produce quality South Sea pearls.

Today, the legacy is continued with Jewelmer. Since its inception in 1979 by Manuel Cojuangco and Jacques Branellec, it has become one of the top three pearl producers in the world.

Since it officially launched in Japan in 2014, the brand is now located in three Mitsukoshi department stores alongside the world’s finest jewelry brands.

Showing that sustainability can indeed be successfully integrated in an enterprise, Jewelmer has steadily grown into a world-class brand, keeping the excellent quality of its product and business while proudly marketing itself as a true Filipino brand.