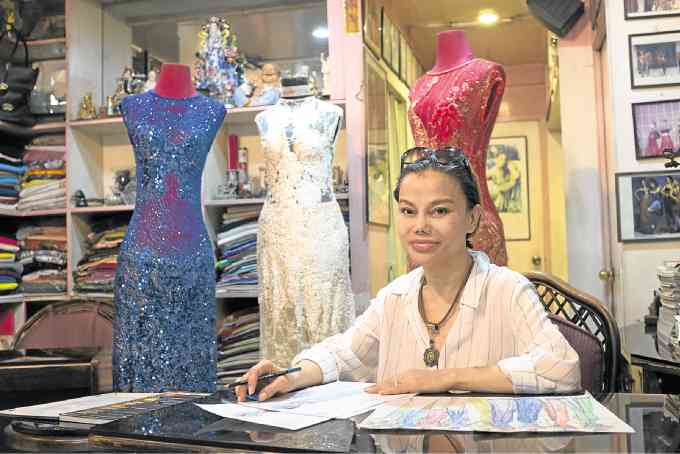 That was the only word that came out of Eddie Baddeo’s lips, after the biopsy result confirmed his worst fear: colorectal cancer stage 2.

He didn’t ask why. He never got mad. He simply begged God for an “extension” of sorts.

It dawned on him that he had had a good and beautiful life—yes, primarily because of the fame and fortune that came with being one of the most popular and successful fashion designers in the country.

Yet, it was the same life he has tried to take so many times when things didn’t go his way.

He tried committing suicide by slashing his wrists on different occasions.

He would question God’s existence and blame Him for his problems. When depression set in, when he felt unloved or when he got tired of dealing with staff and family and pleasing his clients and protecting his image, he thought about ending it all.

In his last attempt, he downed 200 tablets of Benadryl, five  Valium and five  Lexotan.

He was rushed to the nearest hospital and lived.

“The Lord might be telling me now, ‘So, you keep on challenging me? Here’s the real challenge,” said Baddeo.

“But, I don’t question Him,” he added. “I claim that I’ll endure the challenge because He has kept me alive up to this day despite all my mistakes in life.”

Baddeo learned of his illness five months ago, after he was brought to the hospital because of severe abdominal pain and swelling.

Before that, there were already episodes of elevated blood pressure and extreme tiredness, especially in the afternoon. He had been bleeding and was constipated at the same time.

The bleeding started last year, but he chose to ignore it, thinking it was just the side effect of his hypothyroid condition. He was also starting to lose weight.

“Honestly, the first thing that came to my mind was I had AIDS (Acquired Immune Deficiency Syndrome),” Baddeo said.

He took the HIV test. It was negative.

He underwent a colonoscopy, and that was when the doctors found a malignant tumor.

The tumor was said to be as big as a golf ball.

Alarmed, Baddeo’s attending physician immediately ordered surgery and presented Baddeo the grim possibility that he would have to use a colostomy bag for life after the operation.

“It took me a while to process everything,” Baddeo recalled. “Then, I cried and cried. I cried so hard and just said to God, ‘Extend.’”

Baddeo refused to undergo surgery and opted to seek

“I couldn’t afford to ask God anymore why this was happening to me with all the blessings He had given me. I just knew He’d make a way for me and lead me to people who could help me go through this battle,” said Baddeo.

“I’ve been through a lot of trials in my life. I would complain, but I’m just human. I’ve already confessed and asked for His forgiveness. I just don’t want to go under the knife. I’m not yet ready. Surgery is my last option.”

Baddeo, who made a name in the ’90s with his couture creations, underwent 22 sessions of radiation and is starting his third cycle of chemotherapy, based on the recommendation of his oncologist and good friend, Dr. Jennifer Gonong.

He’s scheduled to undergo a PET-CT scan in January to check if the tumor has shrunk. Baddeo is only hoping for the best.

In between treatments and regular blood tests and checkups, he continues to work and keeps himself busy designing for loyal clients and attending various fashion events like the annual Best Dressed Women of the Philippines Awards Ball by the Philippine Cancer Society.

“I want my life to be as normal as possible,” he said. “People think of cancer as a death sentence. No, I’m still alive and loving life more. I’m more inspired to work now and happy to be with people. Funny, some of my clients would tell me,  ‘Don’t ever think of giving up. You’re the only one who makes clothes that fit us so perfectly.’”

When not working, he goes on pilgrimages to churches to pray for healing, not only for himself  but for others, as well.

“I realized there are so many people who are sick like me,” said Baddeo, who goes for treatment in a government hospital. “And these people, young and old, have no financial resources. My heart breaks for them.”

Baddeo has started a devotion to Our Lady of Perpetual Help in Baclaran and Our Lady of Manaoag in Pangasinan. He’s been to Our Lady of Mediatrix Shrine in San Mateo, Rizal; Kamay ni Hesus in Lucban, Quezon; Monasterio de Tarlac in San Jose, Tarlac; and Santo Ninño de Providencia in Las Piñas City.

Baddeo prays the rosary every day, sometimes twice a day.

“I turn to the rosary, especially when fear starts to consume me or when I feel pain in my body,” he said.

Baddeo admits that cancer has changed the way he sees things and deals with people. He’s more compassionate and caring now. He has also renewed his relationship with his family. Baddeo’s siblings used to distance themselves from him.

“I was so strict with them because I was the sole breadwinner in the family. I was mataray and they got scared. I was so busy with work that even my parents couldn’t talk to me.”

But when his siblings learned of his condition, they all trooped to the hospital to give their all-out support.

“I cried when I saw them,” he said. “I thought they didn’t love me anymore. I apologized to them.”

His friends also play a big role. They take turns in accompanying Baddeo to his treatments and check on him every so often. Some even offer financial assistance. They’ve helped him seek assistance from the Philippine Charity Sweepstakes Office, Red Cross and Philippine Cancer Society. His doctors—Gonong, Anthony Abad, Juliana Tamayo and Rosalina Castillo Magnaye—make sure he gets all the medical attention he needs.

“The support of family and friends is very important. Cancer doesn’t affect only the sick person, but also the whole family in all aspects,” he said.

He’s also trying to boost his appetite to regain the lost pounds. He’s more conscious now about what he eats, refraining from red meat and dairy products and eating only fish, veggies, salads and fruits. He needs lots of fiber in his diet to avoid constipation.

“Edgar and I used to eat steak every night. Now, no more,” said Baddeo.

for staying with him all this time. “I don’t know what I would do without him. He takes care of me and handles all my meds. I remember the look on his face when he found out I have cancer. He cried, and I told him he has to be strong for me.”

Lately, Baddeo has been drinking lots of tawa-tawa tea. His immune system and platelet count dropped during his last chemo treatment. He bled profusely and his blood pressure plunged to 90/50.

“I offer everything to God—all my pains and sufferings,” he said. “Whenever I feel low and in pain, I just lift up everything to Him. I surrender myself to him.”

After the pain recedes, Baddeo bounces back to life and continues what he does best— designing. He’s hoping that, one day, he can stage a show, the proceeds of which will go to cancer patients and to the poorest of the poor.

“I push myself and continue to work, because that makes me busy. I need to work for my staff. They need me. I still want to be active. I’m alive. I want to be an inspiration to others that life can be beautiful even with cancer. You have to accept your fate. I’m done with depression and loneliness. I’m happy now because I know I’m closer to God than ever.”