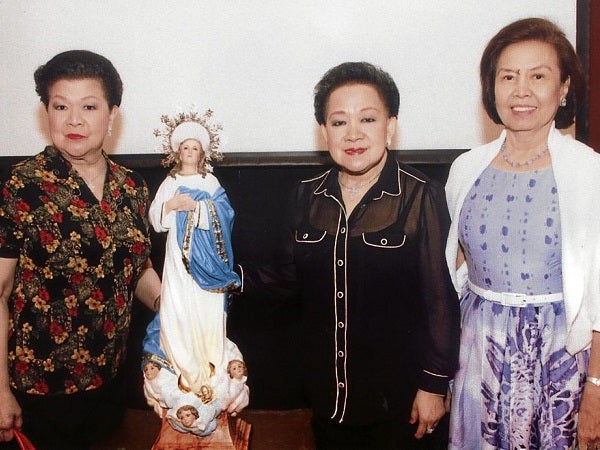 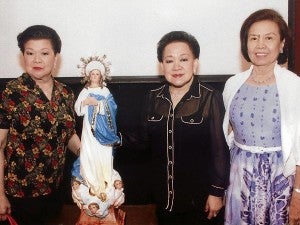 From the six images that initially made up the first Marian procession of the Cofradia de la Inmaculada Concepcion in December, 1980, the procession has grown through the years.

The annual procession on Dec. 4 at 4 p.m. around Intramuros will have 90 carrozas carrying  the various images of the Virgin Mary under her different titles.

Don Ado Escudero, chair of the comite de festejos, said the first procession tried to revive the traditions handed down by the Spaniards in Intramuros, especially the procession in honor of the Inmaculada Concepcion.

Jaime Laya, then administrator of the Intramuros Administration (IA), suggested the participation of the military in the religious procession in keeping with tradition.  The Cofradia sought the help of Helen Espino, wife of Gen. Romeo Espino, chief of staff at that time of the AFP. Since then, the AFP military brass bands have been participating.

The Cofradia de la Inmaculada Concepcion Foundation will hold a Triduum of Masses on Nov. 30-Dec. 2 at 11:30 a.m.   The First Holy Communion of 500 students of Baseco Elementary School will be held on Dec. 3 at 10 a.m.

Prior to the grand Marian procession at 4 p.m. on Dec. 4, there will be the  Hermanas Mayores  Mass  at 2 p.m. to be officiated by  Manila Auxiliary Bishop Bernardino Cortez.

The 6th Pipe Organ Festival of the Manila Cathedral-Immaculate Conception Minor Bacilica will be on Nov. 29 at 7 p.m.

Msgr. Nestor Cerbo, rector of the cathedral, recalls that during the first concert in 2006, which was supposed to be the inaugural concert of the newly restored cathedral organ, Typhoon “Reming” was about to hit Metro Manila and could severely damage the expensive copper roof of the cathedral which had already been damaged by Typhoon “Milenyo” and left unrepaired yet.

Msgr. Cerbo prayed hard to Our Lady for the typhoon to change direction.  His prayer was answered.

The San Beda Alabang Museum is exhibiting  until Dec.  “Beato: An Exhibit on the Relics and Memorabilia of the Blessed John Paull II.”

The exhbit is on the occasion of the school’s fourth anniversary. The opening last Nov. 11  was graced by Parañaque Bishop  Jesse Mercado.

Some of the relics on exhibit are a small piece of zuchetto (skullcap) worn by Pope John Paul II when he was assassinated in 1981, a piece of linen from his deathbed, and the blood believed to have been gathered and kept from the failed assassination attempt.  Curator is professor Joseph Renta.   Admission is free.

Prayers for the intercession of Venerable Mother Maria Theresia Bonzel are available through devotee Edgar Lozano.  Text 0918-6390174 and give your address. Lozano will mail the prayer card to you.

Venerable Mother Theresia’s intercession is believed to have caused the miraculous healing of 6-year-old Luke Burgie from Colorado, US.

She is the founder of the Sisters of St. Francis of Perpetual Adoration  who have a convent and school in Baybay, Leyte.

Today is the birthday of Venerable Francesco Antonio Marcucci, founder of the Pious Workers of the Immaculate Conception, whose nuns run a parochial school in Calaca, Batangas and have a convent in Blue Ridge, QC.  For info and prayer cards, text Sister Adele at 0920-4300078.

Fr. Rene Ruelos, CM, former parish priest, said  that the saint helped him raise money to restore the stained glass windows of the church and fix the roof.  St. Nicholas has helped him, so Fr. Rene says Mass every Monday at 8 a.m. in thanksgiving.

St. Nicholas became “Santa Claus” in English speaking countries due to the wrong pronunciation of “St. Nicholas” to “Sinter Claes.”  Gifts are given to children on Dec. 6, his feast day.

Let us pray the Sorrowful Mysteries for Togo, Africa for the following intentions:  that fledgling democratic institutions will grow more confident; that the painful past of unrest and human rights abuses not be repeated;  that government intensify efforts to end exploitation of children;  that debt relief will free resources for fighting poverty;  and   for the blessing of good weather to ensure good harvests.

Today is also the feast day of Our Lady of the Miraculous Medal.  Mama Mary, pray for us so that we can be united and reconciled and let go of hatred and vindictiveness in Jesus’ name. Amen!