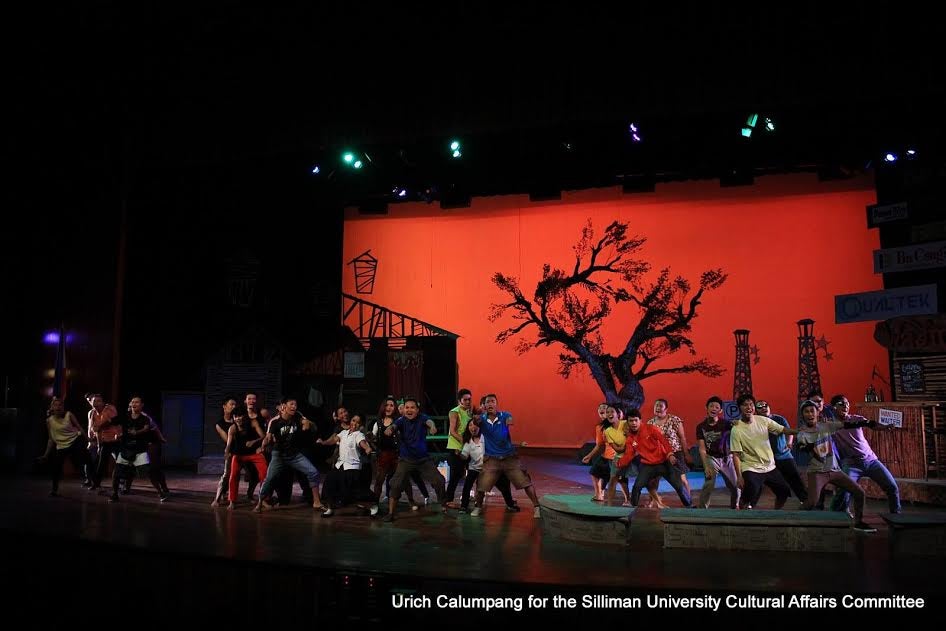 “Scharon Mani,” which utilizes the songs of The Bell Tower Project, is the stirring story of what life is like in this vibrant seaside city in Negros Oriental in the Visayas. It has remaining shows at the Luce Auditorium this weekend.—CONTRIBUTED PHOTO

In ‘Scharon Mani,’ Dumaguete finds its own ‘Rak of Aegis’

One of the powers of literature—which includes drama, of course—is recognition. You pore over the pages of a book, or behold the unfolding scenes of a play, and then there it is: that story, that character, that milieu—that’s you, that’s the place you come from, that’s the story of your life.

A wise writer once said such recognition very much feels like a friendly hand coming out of the page, or reaching out from the stage, which then pats you on the back and tells you, with the comfort of words, that you are not alone. One learns to live for that recognition; when it happens, it is the very definition of boundless joy.

The same thing could be said about a rock musical that is returning to the Claire Isabel McGill Luce Auditorium stage in Dumaguete City this weekend.

“Scharon Mani,” a musical that utilizes the songs of The Bell Tower Project, with a book by Junsly Kitay under the direction of Dessa Quesada-Palm and Earnest Hope Tinambacan, is Dumaguete’s answer to Peta’s “Rak of Aegis.”

Beyond that immediate comparison, it is also the stirring story of what life is like in this vibrant seaside city in Negros Oriental in the Visayas. As such, it becomes a recognizable story, a mosaic of the lives that Dumagueteños celebrate and also endure.

When the play premiered a year ago on the same stage, no one was ready for the tremendous power of its story and its songs. It stirred tremendous word of mouth, but it had a quick run and then disappeared, given the logistics of theatrical productions in Dumaguete. (Any production lasts, at most, three successive days.)

But clamor is a thing not to be ignored. Now it’s back, and we find ourselves once more following the story of a girl with dreams who can sing.

Charlene (played with gusto by Annika Pasague) is a young girl from the shanty district of Lo-oc whose father Nelo sells chicharon and mani—“scharon mani” or pork rind and peanuts—while her mother washes laundry for a living. A talent show is coming to town to scout for singers, and suddenly her dreams seem to be within reach.

Her journey towards her audition—overwhelmed by obstacles, set in Dumaguete’s recognizable locales, and peopled with assorted locals who like her also grapple with impossible odds—becomes the conduit for a relentlessly joyful adventure in song.

These songs are important to take note of, because they inspired the creation of the jukebox musical itself. Taken from a series of albums put out by The Bell Tower Project—the collective of Dumaguete bands and singers who have successfully launched several annual anthologies of music that have come to define Dumaguete musicality—each song, woven seamlessly into a story by Kitay, a talented young playwright, becomes a masterpiece of evocation.

Altogether, they create a sumptuous banquet of sound, and it is not very hard to go out of the theater humming for the life of us.

Director Quesada-Palm has said of the play, which is produced by the Youth Advocates Through Theater Arts for the Silliman University Culture and Arts Council: “It is a tapestry of young people’s dreams, [the] search for meaning in [their lives], their struggles and triumphs. It brings fragments of reality and senses which are distinctly Dumaguete—its settings, its brand of music, characters peopling the streets and how, in their individual brokenness, they find their voice, they build their strength, they emerge resilient.”

Yes, but it works above all as one hallelujah of sheer theatrical entertainment. —CONTRIBUTED