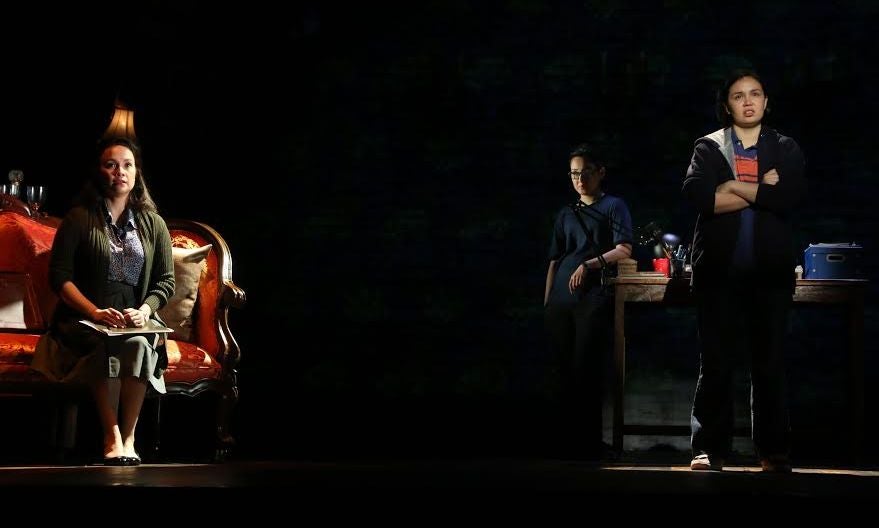 Memory is not to be relied upon. It is a tricky realm, where figures fade and recollections of the past change over time.

That appears to be the gist of “Fun Home,” a musical that will leave you with a boulder on your chest. The show has its light moments, but much of it is a melancholy spell that sears the soul.

This is the story of the Bechdel family—or rather, the family as eldest child Alison, now a middle-aged cartoonist working on her memoir, remembers it.

Set to exquisite music by Jeanine Tesori and Lisa Kron (who also wrote the book), it unfolds as a two-pronged bildungsroman: There’s Alison at age 10, in a seemingly polished home with her parents and siblings; then there’s Alison in college, a bundle of uncertainty.

Everything is seen through Alison’s present-day perspective, and the answers never come easy, if at all. There was a time when her burgeoning attraction toward women still baffled her. And that even more jarring swath of the past when she didn’t know her father was gay—and then one day he killed himself.

That question—“Why     did you kill yourself, Dad?”—is a specter that haunts both narrator and audience throughout the show.

One soon realizes it is the very act of remembering that is the point and the puzzle. The viewer watches alongside Alison as she mines her memories for clues, even if these memories don’t promise closure or concrete answers.

It is this act of remembering that is rendered with piercing clarity by director Bobby Garcia for Atlantis Theatrical Entertainment Group’s “Fun Home.” In brief, everything in this production is on point.

That includes Adam Honoré’s lighting, which fills the stage with spotlights and shadows, incisively illustrating the capricious mind; and Faust Peneyra’s scenery, his decorative minutiae and soaring arches of jumbled furniture summoning the veneer of a home more than they do the warm, authentic thing.

What emerges from this show is a life in varying shades of sadness, where questions always loom bigger than answers.

This life is embodied by three terrific actresses. Katie Bradshaw (alternating with Andee Achacoso) is the spunky, innocent kid Alison, and Cris Villonco subtly rends your heart as present-day Alison, who grounds the entire story even as she spends most of it in the background.

In between is teenaged Alison, who must face her parents’ disintegrating marriage and her father’s eventual suicide as she grapples with sexual confusion and the many other plagues of coming-of-age. All that is captured with aching precision by the underrated Mikkie Bradshaw-Volante, who threatens to run away with the show the same way she did with Atlantis’ “Carrie” three years ago.

Alison’s parents are portrayed by Lea Salonga and Eric Kunze. The latter successfully fleshes out the ambivalence of the man, a figure both intimate and distant in his daughter’s recollections.

Salonga, who appears in very few scenes here, gives you something else. She gets the 11 o’clock number, “Days and Days,” and in those three or so minutes, she puts the full range of her capabilities as a musical theater actress on display, reminding theatergoers just how incomparable she is in the right parts.

By the end, many things in this musical remain opaque. The catharsis, then, must lie in never truly knowing.

You exit the theater having witnessed the collective anguish of a family that could never really figure itself out. Those who live in “Fun Home” aren’t likely to resemble the people you grew up or lived with, but all the same, their tragedy becomes a powerful memory that stays with you. —CONTRIBUTED