Isabel Preysler and I have blast from the past | Inquirer Lifestyle ❮ ❯ 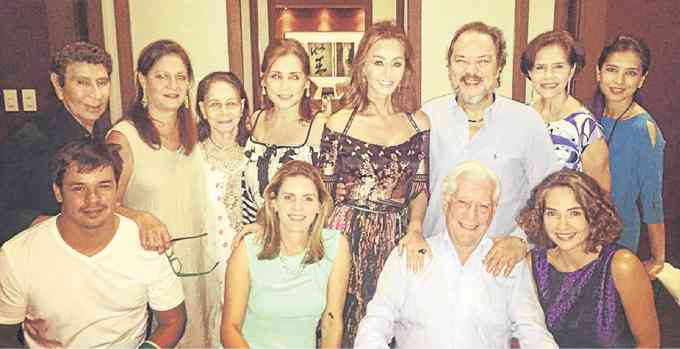 Isabel Preysler and I have blast from the past

When Isabel Preysler blew into town with her partner, Nobel Laureate Mario Vargas Llosa, the couple visited places that brought back memories of her childhood: Manila Polo Club, Assumption convent and San Lorenzo Village where she used to live.

Isabel’s sister, Victoria Preysler Tuason, had a great time recalling those years with Vicky Lopez Tuason, among other friends who also showed up in the San Lorenzo house.

“I have known Isabel since grade school,” said Vicky. “We both studied at Assumption, she in San Lorenzo, I in Herran.”

Vicky recounted that it was during the presentation of a play on the life of Mother Marie Eugenie, founder of the Religious of the Assumption congregation, when she met Isabel, who was then with her best friend, Patty Gomez.

“We were in grade school and it was Marivic Gonzalez who introduced us. (Marivic later married the Conde de Toledo.) The years passed and we lost touch, yet it was so easy to reconnect in one afternoon,” said Vicky.

In the San Lorenzo house, Isabel showed Mario around, going to each room, and upstairs to her old bedroom.

And then she peeped into the next room and said: “This is where my grandmother stayed with the younger boys.”

Entering  the master’s bedroom of her parents, Isabel  was teary-eyed.

As she and Mario walked back to the living room, conversation flowed as they sipped chilled calamansi juice, a first for Mario who loved it.

A Filipino merienda was served, with some of Isabel’s favorites like bibingka, suman and pichi-pichi.

Mario, on the other hand, loved Cecile Reynoso’s siomai,  so much he couldn’t get enough of  it.

Isabel also recounted their trip to Moy Island, pointing out that she loved communing with nature, and that Mario couldn’t  stand the sight of seeds, would you believe?

And then the couple talked about their children, grandchildren, adobo, mechado and curfews when they were young.

When it was time to leave, everyone wanted a photo with the couple. We took some, laughed at the photos and took some more.

Isabel and Mario happily obliged, dahlings, unmindful that they had just arrived in Manila and were suffering from jet lag.

“As they made their way out,” Vicky said, “Mario and I were talking about making choices in life. When I said, ‘You made the right choice on whom to love,’ he smiled broadly and said, ‘Yes, I certainly did.’”

Isabel talked some more about leaving the San Lorenzo house in 1967 to fulfill her parents’ wishes for her to go abroad.

“I remember it well,” Vicky said. “It was her destiny.”

That afternoon, it seemed Isabel’s life had come full circle, only this time with Mario.

It definitely was a blast from the past, Isabel said, as she thanked Vicky Lopez for hosting the gathering.

Two days later, Isabel called up and said she wanted to see me, and to please go to her cousin, Rosanna Tuason Fores’ house. Rosanna was hosting dinner for old and new friends.

The photos will tell you more about the fun dinner, as we had a blast with Isabel and Lyn Ilusorio.

The following day, Vargas Llosa received an invite from Instituto Cervantes saying that he was to receive honorary degrees from De La Salle, his alma mater (and mine, too).