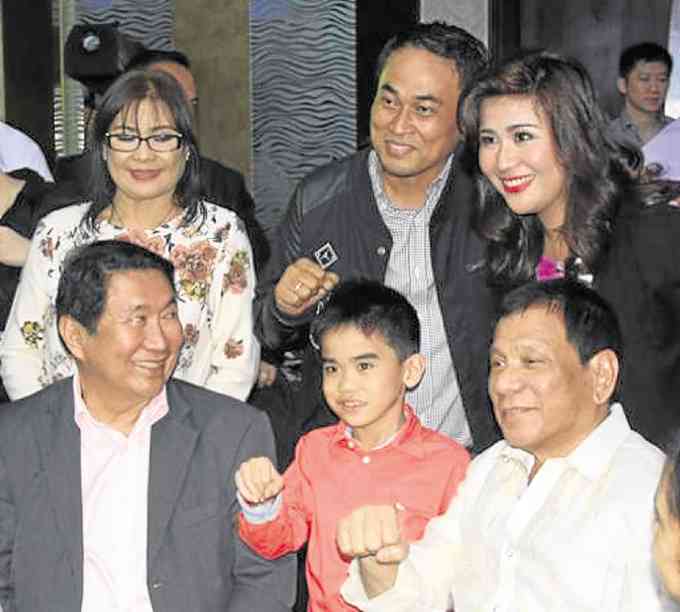 Your mantra for the week: “God cannot forgive but I can.”

God forgives, why can’t we? This is the belief of most people in the world, but I disagree wholeheartedly because I believe that God does not condemn and, thus, never has to forgive.

In IAMISM, we believe that everyone goes to heaven and joins its Maker once more. Yes, even a Hitler or a Marcos must come home to its Maker until their souls decide to return to correct the mistakes they have made in lives past.

That is the reason why we may have been created equal, but we are not born equal. That is also why certain souls choose to be born handicapped.

IAMISM believes that one has to experience what one has made another human being experience, so he/she may learn to understand what that person had done.

I have been confronted about my teaching and preaching forgiveness, and yet people ask why I have not forgiven the Marcoses.

But I have forgiven the Marcoses; in fact, I have shared a meal with them in one occasion or another. And, if the dictator were still alive, I would not mind getting together with him and discuss the whys he plundered the country.

And, if he pleases, we could even converse about his many loves with neither judgment nor moralizing.

The only reason I am still criticizing the Marcoses is only because of their intent to revise history. If I just shut up, it would send the wrong message to the millennials and future generations.

The Marcos family’s recent act of burying FM clandestinely is another move to try and erase what he had done during martial law. There is even an effort to claim that the martial law days were the “golden moments of Philippine history,” while the horrifying truth is that that period should be called the platinum days of kleptocracy.

Yes, I have forgiven Marcos for having detained me, but I would do everything I can to tell the truth about martial law at bakit dapat siyang hukayin—to bring him back to where he really wanted to be buried—beside his mother Josefa. It is only Imelda Marcos and her children who want him buried in the Libingan ng mga Bayani.

I called up Rep. Baby Arenas after the House hearing on Ronnie Dayan and asked her what she thought of the circus-like questioning by her colleagues. “I tried to break the offensive and inane line of questioning and I could not get through amidst the noise and madness that was going on,” she told me. “In my eagerness to do something constructive, I addressed the chair and proposed that the committee secure copies of records or CCTV footage of the parking lot to finally establish where the alleged meeting between Dayan and Kerwin Espinosa happened.” Brava, Baby!

On television, we noticed some congressmen embracing Dayan at first meeting. Close na ba sila, or is his sex appeal really that overwhelming?

Two well-known personalities celebrated their 70th birthdays two days apart—Joey Antonio on Nov. 24, and Mon Tulfo on the 26th, although the latter’s actual birthday was on the 22nd.

Likewise present was my favorite ambassador’s wife and former second lady of Panama, Lizia Lu. I didn’t see Israeli Ambassador to the Philippines Effie Ben Matityau who got lost socializing amid the many guests.

At the same long table was our Inquirer Lifestyle editor, Thelma San Juan. It was nice to see Louie Locsin with her Teddy-torial husband; as well as author Pepe Rodriguez; Foreign Secretary Perfecto Yasay; and Mike Toledo, SVP for public relations of MVP Group of Companies.

The evening’s musical performers were three top singers led by Gary Valenciano, Vina Morales and Piolo Pascual who proudly claims he is a happy unit owner of Gramercy.

Happily playing cohosts were Joey’s four sons—Jigger, Marco, Robbie and Carlo—and, of course, his ever devoted, charming wife Gilda who, at the end of the evening, had a big surprise for Joey: a three-meter cake with a hundred candles—70 white ones representing Joey’s 70th year and the remaining 30 green candlelights for 30 successful years of Century Properties Inc.

The board of directors who were onstage with the birthday boy helped him blow the hundred candles.

Century Properties has built 15 major buildings, and Joey has made it to the Forbes list. His latest honor is his appointment as special business envoy to US President-elect Donald Trump’s coming administration.

This has given the Trump Tower at Century City a boost like no other. That is something very difficult to trump.

At Edsa Shangri-La two days later, Inquirer columnist Mon Tulfo celebrated his 70th—after claiming that he was permanently 46. But he does look younger than his age.

Mon did not build 15 buildings like Joey, but he has produced 16 children, which, to him, comprises his true wealth.

Mon’s family epitomizes what one calls the modern family. For that evening, all his children were gathered with four of their mothers in attendance and, two of them, the mother of the oldest and the youngest, were meeting for the first time graciously and happily.

Most of his children were females, thus proving my theory that men who have many daughters go for strong and independent women.

Mon’s guest list for that evening won’t be easy to match, judging from the place cards I read at the presidential table where Mon was seated to the left of former President Joseph Estrada, and to Mon’s left, the just released Pampanga Second District Representative  and former President Gloria Macapagal-Arroyo. Not to mention, her husband Mike, who, once upon a time, would have been very happy if Mon were living in another dimension. If that does not prove that Mon is a changed man, nothing will.

I once had a segment on Mon’s radio show, “Isumbong Mo Kay Tulfo,” but DWIZ management decided to separate us because, “masyado nang bumabait si Tulfo.” What management did not realize is, talagang mabait si Mon. He just seems matapang only when, to his mind, he is fighting for what is right.

I was so pleased to meet the Tourism Secretary Wanda Teo, who is truly prettier in person than in photos. She is gracious and enthusiastic in promoting tourism in the country, as evidenced by her long conversation with Sen. Richard Gordon, himself a former tourism secretary.

Mon’s grandchildren performed to the delight of his guests. The still attractive Ivy Violan belted out standards.

Philip Salvador gave a narrative about his long friendship with Mon.

It was a pleasure to have a conversation with former Manila Mayor Alfredo Lim who was happy not to be seated at the presidential table for “plunderous” reasons. Instead he shared a table with Majority Floor Leader Sen. Tito Sotto whose wife Helen has been a long-time friend.

The highlight of the evening, however, was the arrival of President Rodrigo Duterte who showed up at 11 p.m., after giving his keynote address at the annual San Beda College of Law Alumni Homecoming.

By that time almost all of Mon’s guests had left, since the invitation was for 6:30 p.m. Be that as it may, the blessing was the opportunity of Mon’s large family to meet the President up close and personal.

Mr. Duterte did look like he was with family. Happy 70th to Joey and Mon. Kudos for all you have achieved in your lives.