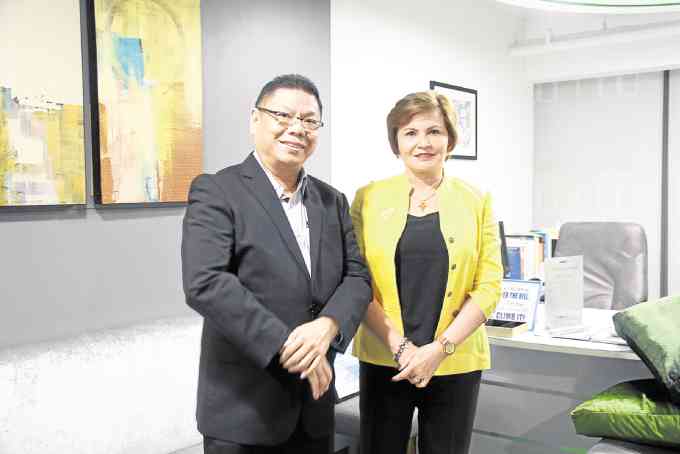 After taking the post of medical director of Makati Medical Center in July, Dr. Johnny Sinon has made it his mission to ensure the continuous growth, expansion and leadership of one of the country’s top hospitals.

Strengthening medical education is No. 1 on his list. “Training is one of the things that distinguishes a good medical center from others,” says Sinon, a pioneer in the field of emergency medicine in the country.

MakatiMed’s Department of Emergency Medicine, which he headed from 2005 to 2014, is a perfect case in point: its Emergency Medicine Training Program consistently produces graduates sought after by international hospitals and companies.

“When our graduates apply at Norwegian Cruise Line, they’re accepted right away,” he says. “We currently have 20 working for the cruise line, four working in Singapore hospitals, and 30 working in different hospitals in Sydney, Australia.”

Meanwhile, graduates who choose to remain in the country become valuable members of MakatiMed’s ER department—or the ERs of hospitals around the city.

“It’s actually helpful to us because we consult each other, and it’s very easy to move patients because our colleagues are there,” says Sinon.

A true advocate of education, the medical director is also collaborating with a university to offer a Master in Hospital Administration (MHA) within MakatiMed. This gives doctors the opportunity to learn management skills—something that isn’t taught in medical school, he says.

The hospital also maintains a strict and robust Institutional Review Board (IRB) recognized by all international accrediting bodies. The high standard set by the IRB pushes residents to turn in exceptional research papers.

Still, it’s Sinon’s eagerness to implement technology in his work that impressed MakatiMed president and CEO Rosalie  Montenegro the most. “He’s very computer-savvy, which is relevant today because we deliver healthcare using technology,” she says.

MakatiMed’s ER department, in fact, was one of the earliest to adopt technology, “so every time we want to try something that involves technology, we ask the ER to be our proof of concept,” she says.

Embracing technology via the latest medical equipment is a start. Sinon, for example, recognizes the evolving role of ultrasound in diagnostics. “Some say it’s the new stethoscope. The latest ultrasound devices are as small as a smart phone. They increase our diagnostic skills and don’t expose patients to radiation because ultrasound uses sound waves.”

As soon as the safe and portable equipment is available, MakatiMed’s ER department will be the first to use it in its practice.

For her part, Montenegro has been gradually turning MakatiMed into an efficiently run, technology-driven healthcare facility since her CEO appointment in 2009. Through her previous career with the Philippine Long Distance Telephone Company, the retired PLDT senior vice      president invested in SAP (Standard Application Platform), a hardware that allows the hospital to closely monitor its finances.

She also tapped the Spanish software company Indra to create and apply a global healthcare system for the hospital. Doctors now dispense prescriptions electronically through a tablet that automatically sends the information to an out-patient pharmacy.

Electronic medical charts, which will be launched soon, mark the final phase of MakatiMed’s major IT transformation.

For all this focus on education and technology, patient satisfaction and well-being remain the top priority of this hospital and its medical director.

“There is no better advertisement than a happy and healthy patient,” he says. Sinon also gives importance and attention to MakatiMed’s various corporate social responsibility initiatives—from its medical missions and health services programs to its charity programs for indigents.

A graduate of the University of Santo Tomas, Sinon was a rookie resident when he first visited Makati Medical Center in 1984.

“This was pre-Waze. I didn’t even know where MakatiMed was,” he says with a chuckle. “I had to take the bus and find my way.”

Once he reached his destination, he inquired about training in the then little-known field of emergency medicine; next thing he knew, he was being asked to report for duty on that very day.

After a four-year residency, he became chief resident, then chair of the Department of Emergency Medicine for nine years.

“I grew up in MakatiMed,” sums up Sinon, who was also head of the hospital’s HealthHub. “MakatiMed has been very kind to me. Everything I have now is because of MakatiMed.”

Indeed, he credits his training and practice at the world-class hospital for helping him land plum jobs like in-house doctor for Philippine Airlines and Hotel InterContinental Manila, president of the Medical Staff Association, and medical director of International SOS (Philippines) Inc., a global organization specializing in medical and travel security assistance.

His most prestigious posting, though, is that of personal physician to former President Fidel V. Ramos.

“I got to see places that aren’t open to regular tourists,” says Sinon, who put his thesis for his MHA at Ateneo Graduate School of Business on hold to take on this coveted job.

Sinon may be a full-time medical director till 2018, but he is still a doctor at heart. Select weekends will find him in practice at the Emergency Room.

Looks like education doesn’t end—even for the man in charge. “It’s to keep my clinical knowledge,” he explains. “And the ER is a reflection of the entire hospital. Being in the ER allows me to see and learn things that I wouldn’t know about if I were just in the office.” —CONTRIBUTED