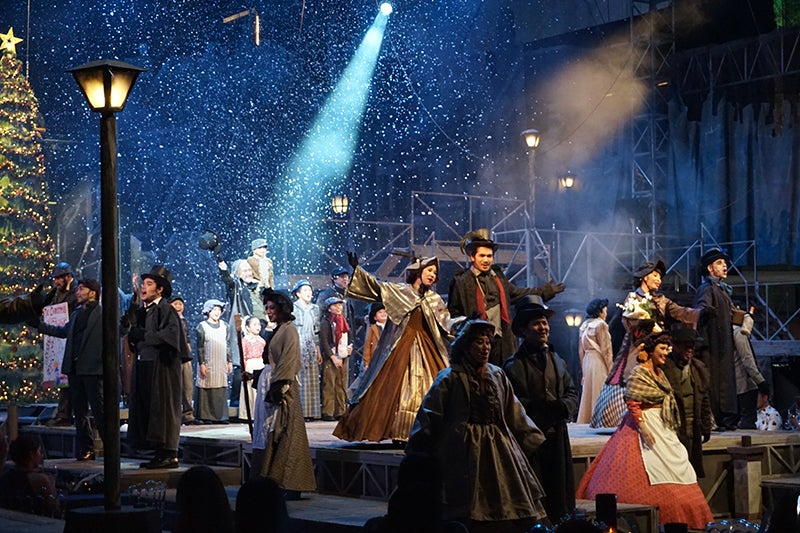 9 Works Theatrical’s production of “A Christmas Carol”—music by Alan Menken and lyrics by Lynn Ahrens. Robbie Guevara directs, with scenography by Mio Infante and musical direction by Daniel Bartolome. The show runs until Dec. 25 at Globe Iconic Theater, BGC. —PHOTO BY KOJI ARSUA

Any theatrical company that stages “A Christmas Carol,” the classic tale of redemption in Charles Dickens’ London, would find itself on grounds both advantageous and risky.

The advantage in mounting it is obvious: Ebenezer Scrooge’s encounters with the three ghosts of Christmas are familiar and popular enough to rouse the holiday cheer in its audiences. On the other hand, unless something new is infused into the production, that all-too-familiar story of the man who made “Humbug!” a catchphrase can also bore the audience.

9 Works Theatrical’s take on this tale attempts to be different by highlighting the community, and the context, in which Scrooge (Miguel Faustmann) makes his transition from darkness to light. Mio Infante’s set design and Martin Esteva’s lighting immediately thrust the audience into a massive, bleak set that shows an England that has seen better days.

The ensemble also streams into and out of the stage, recreating a bustling city that cannot seem to leave the loner Scrooge to his much-desired peace. Director Robbie Guevara maximizes this space, letting loose his characters to climb rickety stairs, populate the set from one end to the other in their dance numbers, and perch themselves on its farthest edges, inches away from the audience.

Faustmann’s Scrooge, in perhaps his nth take on the role (he also played the part in past Repertory Philippines productions), does not operate in a vacuum. Maybe that’s why his performance now is more refreshingly restrained, without need to exaggerate or inflect, unlike in his previous portrayals. The book by Mike Ockrent and Lynn Ahrens also patiently lays out Scrooge’s back story to underline the hardships that had eventually hardened his heart.

The hearty ensemble pulls out all the stops to turn in energetic performances. Unfortunately, the bland, repetitive music by Alan Menken ultimately does them a disservice. The soundtrack’s lack of memorable tunes tends to make the chorus’ song-and-dance numbers long and overwrought.

There is too much happening on the stage in a lot of these moments. Scrooge himself tends to get lost in the revelry, and his supposedly defining personal interactions with some of the central characters fail to hit home.

Interestingly, this production shines the most in its darker moments. Some of them are seemingly minor transitions that nevertheless resonate and touch an emotional chord, like the boy Ebenezer’s being witness to his father’s imprisonment due to a huge family debt.

Some other tingly moments are actually quite fun, like the zombie-like swarm of evil spirits that show Scrooge his supposed final resting place. The mute female Ghost of Christmas Future is also a sly rendition—part mummy, part magician.

Guevara’s visually striking staging of the final scenes leading to Scrooge’s change of heart makes his conversion convincing. The character’s realization that he is tottering on the edge of a fatal precipice packs more punch than any of the later sentimental declarations of love.

Ultimately, the reaction the production inadvertently elicits in its finer moments is reflection, not celebration—
which does give this “Christmas Carol” a bit of differentiation. —CONTRIBUTED