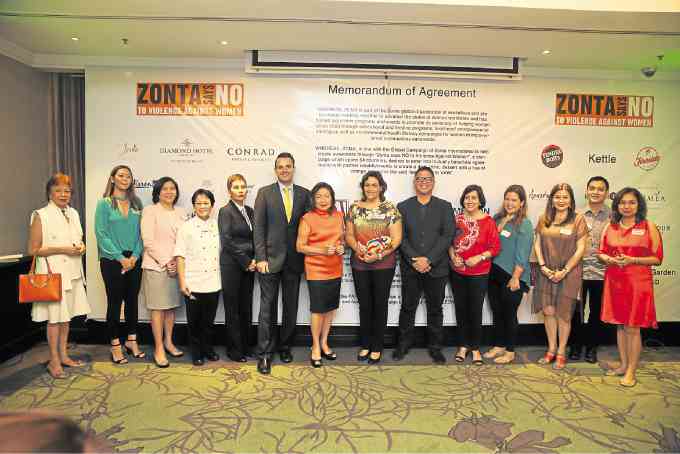 Joining the fight against gender-based violence

It might have been easier to host a glamorous charity ball. It would have been an opportunity for the ladies of Zonta Club of Makati Ayala (ZCMA) to dress to the nines and dance the night away.

The morning after, the good deed would have been done, and the civic group would pass a portion of the proceeds to the beneficiary. And the world would be a better place.

But for ZCMA president Rita Dy, the usual charity ball wouldn’t do, especially not for the important cause the group was advocating.

ZCMA joined other Zonta Clubs in 66 countries in a campaign to stop violence against women and children. The campaign, dubbed “No to Violence against Women,” ran for 16 days from Nov. 25 to Dec. 10.

This was all part of the “16 Days of Activism against Gender Violence,” the global campaign of the Center for Women’s Leadership. The kickoff date happened to be the International Day for Elimination of Gender-based Violence, while Dec. 10 was International Human Rights Day.

For its part, ZCMA raised funds for the Cameleon Association, a French nongovernment organization committed to rehabilitating sexually abused women and children aged 5 to 18. It operates a facility in Passi City, Iloilo.

“This is a very important cause, and we want the general public to be aware of the issues involving violence against women and children, especially in the country,” said Dy at a press conference at the Manila Diamond Hotel.

“If we chose to hold a charity ball, only the guests would learn about it. So we went for a different way to raise money and educate the public about this advocacy,” she explained.

To raise the funds, Dy asked a total of 37 restaurants, hotels and resorts to concoct a special dish or drink.

The dish was part of their menu during the campaign, and featured orange as the symbolic color chosen for the global campaign, Dy said.

Dy said the establishments would directly channel the funds to Cameleon. She noted that it would be up to the sponsor restaurants and hotels to do their own accounting of how much each would be remitting to Cameleon.

“Every time a customer ordered the special dish or drink, he or she contributed to the cause and made a statement against gender-based violence,” said Dy.

Cameleon Association founder Laurence Ligier said this was the most unique fundraiser she has encountered.

“It’s always difficult to raise money for the various Cameleon facilities located around world. It’s most difficult in France! But Ms. Dy found a way to spread the word of Cameleon’s work, and it’s amazing that she managed to get so many sponsors,” said Ligier.

Jessie Sincioco of Chef Jessie at Rockwell Club was among the restaurateurs who said yes to the indomitable fundraiser.

“I’ve been fortunate with my business and career, and when I learned about this advocacy, I immediately agreed to participate because it’s the perfect way to give back,” Sincioco said. —CONTRIBUTED