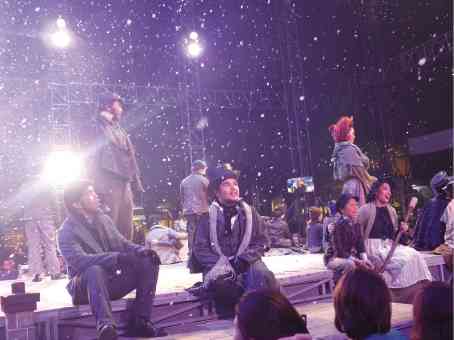 “A Christmas Carol” is one of those stories that we grew all up with that never gets old. Charles Dickens’ story about Ebenezer Scrooge has been told and retold, tweaked and served as an inspiration for spinoffs, and immortalized in books, theater, film and even Saturday morning cartoons.

The daunting character of Mr. Scrooge is one that we hoped to never meet in real life when we were kids but the man he transforms into after meeting the ghost of his former business partner Jacob Marley as well as the ghosts of Christmas Past, Present and Yet to Be is the person we wish everyone to become, especially during Christmas season: warm, generous and full of yuletide cheer.

Perhaps this is why “A Christmas Carol” never gets old, whichever form it takes. The lessons we learn from it are timeless and timely at the same time. You can watch a holiday film inspired by Dickens’ work this year and watch it on stage the next, but whatever you take away from the experience will be applicable to the life you live.

However, we watch this time-loved classic over and over again not only for the life lessons it comes with; we of course wish to be entertained. This is where it becomes tricky; staging something for the nth time is prone to redundancy and taste of course is subjective.

The ongoing run of “A Christmas Carol” by 9 Works Theatrical keeps you entertained all throughout; it’s a feast for the senses as much as it is nourishment for the heart. It’s refreshing, extravagantly and craftfully staged although darker visual spectacle—one that every child, millennial and tita of Manila will all enjoy.

Let’s start with the basics—costumes. The detail that has gone into every costume is awe-inspiring. Petticoats and coats are everywhere, in different colors, shapes, patterns and textures that vary depending on the character and mood—for a cast of 36, no less.

Costumes however comprise a small part of the whole. The set makes the perfect venue for such an elaborate production; notice the use of the term “venue.” In this case, the set is not just a backdrop; it’s three stories high and includes ladders, islands and bridges that extend and intersect with the audience.

And then there’s the makeup and special effects which make this version eerily captivating in many parts. The ghosts really look scary (far from your horror-house knock-offs) and the lights and sounds make the scene even creepier.  Wait for the scene where the ghost of Jacob Marley, Scrooge’s deceased business partner, appears. You won’t recognize that it’s Miss Saigon alumnus Ariel Reonal in front of you but his character and colors in that scene will remind you of Tim Burton’s “Beetlejuice.”

Although he has been familiar with “A Christmas Carol” since he was young, Reonal took great care in preparing for his role, reading and watching what he could on the character of Jacob Marley and his relationship with Scrooge. He was able to ease into the role seamlessly, but quick makeup and costume changes from ghost to human and ghost again proved to be a challenge.

For Will Angeles, who took on three roles as the Beadle, Fish Monger and Judge, trying to speak in a realistically British-sounding accent (the play is set in London) proved to be quite difficult but perhaps not as complicated as looking into the back story of every role, mastering the appropriate stance, personality and lines for each and jumping into rigorous rehearsals in layered costumes.

Kudos to creative director Mio Infante for pulling off this grandiose, delectable and refreshing extravaganza of set, costume and light design. Infante admitted that it took approximately 30 people to work on the costumes and 50 for the lights and to produce such a spectacle of a set.

Miguel Faustmann is the quintessential Ebenezer Scrooge and every bit the miserable, bitter and resentful old man nobody wants to run into. He does run into Norby David, Franz Imperial and Ela Lisondra who portray Ghosts of Christmas Past, Present and Yet to Be, respectively.

This show is only Norby David’s second stint with 9 Works, but it seems that he is fitting in theater quite nicely, considering that he comes from a different background; he was once the vocalist of a rather popular local rock band. Imperial, on the other hand was trained by the likes of Zenaida Amador and Baby Barredo and has been professionally singing and acting since year 2000. He is remembered for his role as Shrek in a local production but he is equally as effective as the Ghost of Christmas Present.

Ela Lisondra as the Ghost of Christmas Yet to Be is quiet yet bewitching. Doesn’t say much but gets the message across and captivates with her body movements. There is no need to remind anyone to keep their eyes glued to this scene as it will happen naturally. Just make sure to close your mouth after your jaw drops.

The music of Alan Menken and Lynn Ahrens is as timeless as the story it flows through and the members of the cast are as endearing as the characters they portray; from Old Scrooge and the three ghosts to Tiny Tim and the Cratchits and Mr. And Mrs. Fezziwig.

“A Christmas Carol” brings the audience to 19th-century London, into the world of Ebenezer Scrooge. It is experiential in the literal sense, which one will attest to once he or she gets to see the show, and touch the snow.  Director Robbie Guevarra has once again delivered on his promise of delivering a show worth watching, and what a show it is.