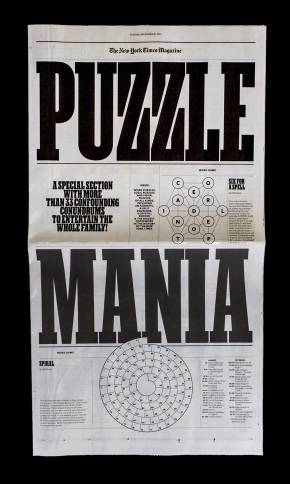 Crossword puzzles have become a customary feature of newspapers all over the world—and The New York Times is leveling up its Sunday edition with one of its largest creations ever.

Sharpen your pencils, people: Our special puzzle section is in the paper this Sunday, 12/18, featuring the BIGGEST NYT CROSSWORD ever! pic.twitter.com/heTEjRxv8c

Unlike the typical crossword puzzles that can usually be finished in one sitting, the 50×50 738-clue monstrosity, also referred to as “Super Mega,”may take experienced puzzle solvers days to complete, according to CNET.

Also, typical Times crosswords measure 15 by 15 squares and 21 by 21 on weekends, which the Super Mega dwarfs in comparison as it takes up two full newspaper pages.

The man responsible for the mind-boggling word hunt, Frank Longo, described his creation in an article in the paper.

“It’s a gigantic grid,” Longo, who also works as a fact-checker and test-solver for the Times, said. “It was hard to know where to start.”

The puzzle creator also estimated that it takes 30 to 45 minutes for advanced readers to finish regular puzzles, and the Super Mega may take a bit more of their time. “I’d say multiply that times four for this one, so two or three hours at the very least,” he said.

Despite its intimidating size, Longo admitted that readers would not have much problem when it comes to the difficulty of the words.

“We didn’t want it too hard because it’s so crazily big. You could spend all day on it.”

As of this writing, the Times has only made one correction to its enormous puzzle. “There are two 387D numbers in the grid,” the paper noted in a column online. “The second is supposed to be 388D, and does not affect the solving of the puzzle.”

Aside from giving its loyal followers something to work on during their leisure time, the paper is also rewarding readers who will be able to finish it.

The completed puzzle reveals a phrase, and those who find it should send it to a specified email address.

Five lucky winners will receive a year’s subscription to the print newspaper, and 50 more will get a crossword book signed by Times puzzle-editing legend Will Shortz.  Khristian Ibarrola