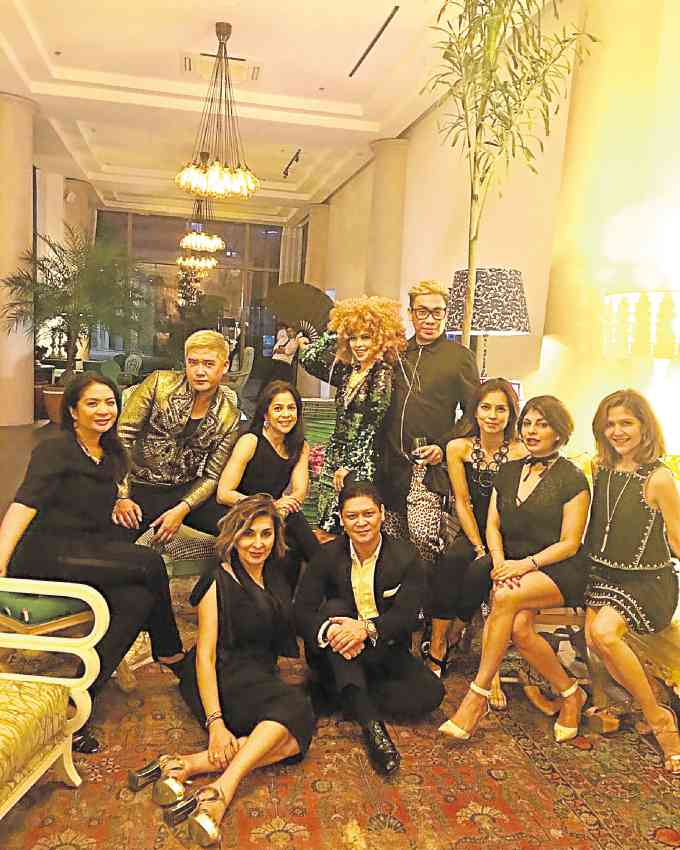 I’m exhausted from the shenanigans of the past Monkey year, so I’m hoping the Year of the Fire Rooster will bring fresh challenges that are more fruitful and fulfilling.

I always anticipate the Chinese New Year as time for personal evolution, and for a spiritual journey of transformation.

The Year of the Rooster begins on Jan.  28. It is a time for conscientiousness, hard work, discipline and a realistic outlook. Those words are challenging to me; the hardest is that we are advised to be financially frugal. I guess we must choose our battles wisely to avoid too much crowing and pecking this year.

We need to brace ourselves for a period of immense changes and healing. The universe keeps score, and what we do has a way of coming back to us in unexpected ways. Acts of love and kindness are rewarded, so let karma work wonders in our lives.

Good karma will continuously shine on Bench king Ben Chan, since he generously supports many charitable affairs, especially the annual Red Charity Gala. Kaye Tiñga and I are delighted to have creative fashion designer Joey Samson as the featured designer for the ninth gala edition in 2017. Ben has already committed to support us again, and we are excited to plan this early with direk Ariel Lozada.

Since its establishment in 1987, Bench has managed to grow from a start-up clothing concept to the country’s leading lifestyle brand. Now with sub-brands such as Bench Body for underwear, Bench Skin Expert for skin and body care, and Bench Fix Salon for hair, the brand continues to expand in order to cater to its growing market’s needs.

To kick off the retail giant’s yearlong celebration of its 30th birthday in 2017, the company recently opened Bench Barbers, the newest style and grooming haven for men. It’s a modern-day man cave that offers top-notch pampering services to help customers look good and feel even better.

With no less than actor Alden Richards and model John Spainhour representing the brand, it promises premium quality service for the man who’s meant to be a cut above the rest.

In line with the brand’s promise of confidence-boosting hair styling and grooming, Bench Barbers has also launched Mark Bustos as the new ambassador of its Bench Fix Professional Styling Tool, Clay Doh. Mark is the New York-based hairstylist who has gained worldwide acclaim for his #BeAwesomeToSomebody movement, where he gives free haircuts to NYC’s homeless during his spare time. Here, he continues his humanitarian efforts with Bench.

Mark gave free training to the Bench Barbers styling team, and recently partnered with Bench Fix Salon to visit the Department of Social Welfare and Development Haven for the Elderly and Tahanang Walang Hagdan, as his way of paying it forward.

Bench Barbers x Mark Bustos was formally launched over the holidays at Makati Shangri-La, and guests were treated to a preview of two heartwarming videos of the partnership between Bench and Mark.

Bench Barbers is located at the 2/F of Ayala Glorietta 4.

Life-changing incidents happen to all of us. For Philippine Tatler editor in chief Anton San Diego, the event was a helicopter crash two years ago, which took the lives of entrepreneur Archie King and pilot Major Taborlupa. Anton recently turned 50, and he told me that he has learned to celebrate life, moments and friendships.

In line with his Life 2.0, Anton decided on a grand half centenary celebration. Music, good vibes and surprises rang throughout the Manila House Private Club in Bonifacio Global City as Anton and friends partied all night.

Anton said, “I asked my close friends to perform during the evening; of course, it took a lot of arm-bending to accomplish this, but in the end they came through, accomplishing much more than I expected. I am overwhelmed with the love!”

I also got into the program, with “Can’t Stop the Feeling,” the same number I performed at the Usana grand launch at SM Mall of Asia, where I was honored to be introduced as their latest brand ambassador. A big thanks to Usana’s Leeo Onanad for the music and back-up dancers.

Super guy Tim Yap followed with Spandau Ballet’s “Gold,” accompanied by a full marching band from Lucban, Quezon. Tina Maristela-Ocampo went full-on supermodel on the catwalk, while drag queens from O Bar sang “I Am What I Am.”

Friends from way back showed Anton their love with a video set to Madonna’s “Vogue” with a surprise appearance by Derek Ramsay. It was a sentimental last song for a golden night.

To cap the festive cavalcade, the crowd adjourned to the bar for a fittingly intimate finale to a golden celebration of life. As they say, Anton, “It only gets better from here!”