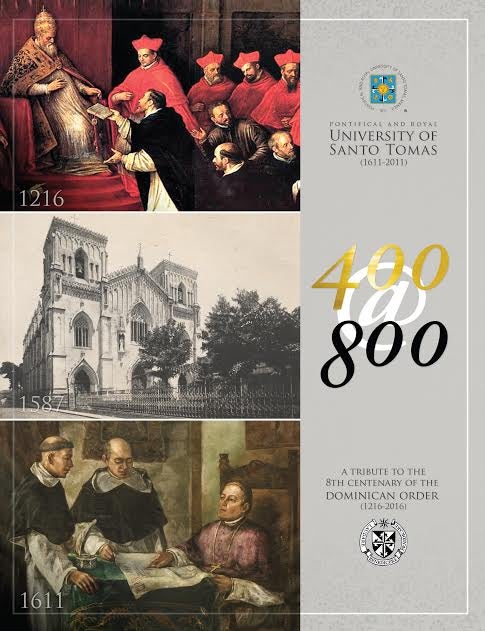 The Order of Preachers (OP) will close its historic 800th foundation anniversary on Jan. 21 with a Mass presided by no less than Pope Francis at the Archbasilica of St. John Lateran in Rome.

Elsewhere around the world, Dominican institutions are holding parallel celebrations in the run-up to the closing of the Dominican jubilee.

A vigil at Rome’s famous gothic church Santa Maria Sopra Minerva of the Dominicans will he held on Jan. 20.

A similar vigil is being held in another continent—in Asia, at the ancient Church of Santo Cristo of the Holy Rosary Province of the Spanish Dominicans in San Juan City, Metro Manila.

On Jan. 20, Lingayen-Dagupan Archbishop Socrates Villegas, president of the Catholic Bishops of the Conference of the Philippines and himself a Dominican clerical fraternity brethren, will celebrate Mass and close the Jubilee door at the Santo Domingo Church in Quezon City.

Perhaps a capsule summary of that enduring legacy could be seen in one of several commemorative books published around the world for the Dominican jubilee—“[email protected]: A Tribute to the 8th Centenary of the Dominican Order (1216-2016),” published by the UST Publishing House (tel. 7323522).

“UST is half as old as the Order of Preachers, but both owe their origin to St. Dominic, preacher of grace, both gratefully celebrate the generosity of God, the Giver of all graces, the wellspring of unending grace,” writes Fr. Gerard Francisco   Timoner III, OP, Philippine prior provincial and the only Philippine member of the International Theological Commission that advises Pope Francis.

True to the Dominican Order’s many-sided involvements and achievements, “[email protected]: A Tribute to the 8th Centenary of the Dominican Order (1216-2016)” is collaborative effort that features articles authored by members of the Order, the academe, and the UST community.

“While this grand tome presents a magnificent story of 400 years, it also sheds light on the intrepid missionaries who were among the first to bring the faith to our islands and to establish parishes and schools,” writes Manila Archbishop Luis Antonio Cardinal Tagle in his message.

With beautiful photographs and illustrations that transport readers to another time, the book is easy on the eye as it is a delight to read. The first part, “Dominicans in the Philippines,” opens with a brief historical timeline of Dominican presence in the country. It recounts how Dominicans actively engaged in missions that naturally targeted far-flung areas, where non-Christians could be converted and territories could be established. It also includes an informative piece on St. Dominic de Guzman, the Spaniard who, along with St. Francis of Assisi, led the mendicant friar movement that reformed the medieval church—a preacher in every sense. The chapter ends with the beginnings of the Domincan Province of the Philippines by Fr. Rolando V. de la Rosa, OP, former rector of UST.

What follows is a comprehensive history of UST written by historian Regalado Trota José. The chapter, which is supplemented by images, illustrations, books and documents from UST’s very own collection, maps out the storied institution’s past, from its conception in 1605 to how it has come to be known as the “Catholic University of the Philippines” and the only pontifical university in Asia.

The book’s third part, “The University of Santo Tomas Today,” gives readers a glimpse of the inner workings of UST at present “as both a Catholic institution and a leading comprehesive university in the Pacific.” Aside from tackling spiritual formation in UST, which highlights the memorable papal visits to the university, the chapter also outlines the university’s departments and their work.

“[email protected],” the book’s fourth chapter, spotlights the university’s quadricentennial celebration (2011 to 2012). Concluding “[email protected]”—and perhaps this is one of the most visually enriching entries in the book—is a part dedicated to UST’s exhibition at the United Nations Educational, Scientifc and Cultural Organization (Unesco) Headquarters in Paris, held Sept. 21 to 23, 2011, the only Philippine university to be accorded such a privilege by Unesco.

“[email protected]” includes a laudable set of appendices that gives readers access to information about the university, effectively complementing the narratives found in the book.

With the proud legacy of UST, it is evident that the Dominican Order has indeed been successful in its three-fold mission endowed it by the great St. Dominic: “Laudare (to praise), Benedicere (to bless), Praedicare (to preach).”

“As we begin the University’s next centenary,” writes Fr. Herminio Dagohoy, OP, rector of UST, in the foreword, “this exquisite volume will provide us with the wonderful opportunity to engage in a nostalgic dialogue with our historic past and lead us to a dynamic and vibrant discussion about our singular accomplishments as we flip through its pages.” —CONTRIBUTED