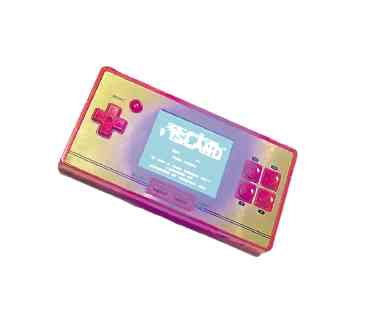 Forget the Santi’s gift baskets or the Marks & Spencer snacks in pretty packaging. Never mind the well-thought-of presents from family and friends or the expensive gifts I got from celeb friends.

The best Christmas gift I got last year—hands down—is the FC Pocket (aka the non-Nintendo pocket-sized Family Computer) that I bought for myself. It is a cheap, China-made (I think) portable gadget that I bought from an online seller on Instagram. It was priced P1,500 before Christmas but they slashed P100 off right after the 25th. That was the sign that I needed; I quickly arranged a meet-up to get myself one. And oh, I just have to add that they slashed off another P100 right after I made a purchase. Oh well.

The red and gold-colored gadget is super lightweight; it is so light I know that I will never get to use it again if I accidentally drop it.

Also inside the box are a pouch, a charger and a cable so you can connect it to the TV set.

A total of 472 games are “built in” and while there is also a cartridge containing 128 extra games, I discovered I don’t really need it because all the good games are built in the console.

I’m talking about good games like “Super Mario Bros.,” the number one reason why I bought the gadget. Playing the game on a small screen felt a bit weird a first but after seeing familiar visuals (mushrooms, turtles, gold coins) and hearing those all-too-familiar sounds (like that belat music when it’s Game Over), it was pure ecstasy. I couldn’t put the gadget down.

And so imagine my shock and panic when the screen started to turn dark after an hour. I could still see the images and hear the sound effects but the screen got really dark. I couldn’t believe it. I managed to get myself a lemon. It didn’t even reach the new year!

Thankfully, it was just the battery running low lang pala so tuloy ang saya. Don’t judge me—there was no power indicator on the screen. That’s what I get for a P1,400-priced gadget.

What I love about this Pocket Family Computer is how it transports me back to my childhood. Certain games remind me of certain people, bring back specific memories, and then make me feel all these different emotions.

Imagine: I was sniffing while playing “Bomber Man” (yes, that game where a mouthless guy drops bombs and hopes they explode and kill hovering balloons and water droplets); the game is special to me because my mom and I used to play it every night. And then she went to the US. We haven’t seen each other for over 20 years.

I have been using the FC Pocket more than my iPad these past few days, choosing Galaga over Boom Dots and Millipede over War of Slither. I think this is going to continue. I think I’ll be playing with the FC Pocket even more the next few months.

After all, I’m better with the buttons now.

And I can stay up all night trying to save that princess.

Not as if I need all those hours to save the princess, ahem…

Mario-inspired, but replace the turtles with snails and the mushrooms with eggs. Character looks like a topless Charlie Chaplin.

Do we really have to describe this iconic game?

The Legend of Kage

You’re a ninja and you need to kill other ninjas with ninja stars so you can advance to the next stages and save the kidnapped princess.

A shooting game where shooting bells to change their colors and powers is as exciting as shooting the enemies.

You’re a man who can fly because you have balloons, and you need to pop the balloons of the enemies so they die (they look like birds but they can’t be birds ’coz why would they need balloons to fly, right?), while making sure they don’t pop your balloons.

This tank-shooting game was so addicting especially when you got power-ups like the Stars (making you shoot faster) and the Bomb, which killed all the other tanks around.

You’re the mouthless man leaving bombs to kill these pink balloons and water droplets. It gets really exciting when you get more bombs and when the bombs’ explosions get wider.

A shooting game where you need to shoot all these insect/crustacean-looking aliens.

A shooting game where you need to shoot all these insect-looking aliens.

You’re this boy who needs to collect mounds of gold (we thought they were bigas when we were young) while avoiding all these pesky ninjas.

You’re this Kimy-looking Eskimo and you need to reach the top of the mountain by using a wooden mallet to club animal-enemies and carving openings from the ceilings/floors so you can move up.

Fast-paced and highly stressful, this is a shooting game where you need to shoot a millipede before it reaches and kills you.

You’re a cute blob who needs to get all these fruits so that you can have access to your significant other, but make sure you avoid the bad blob out to get you.

A futuristic shooting game where you’re a cute spaceship and you need to shoot all these cute/weird-looking enemies that die and turn into coins.

Blow on the inside part of the cartridge when it doesn’t want to work (of course, you did!)

Press Start (pause) when Player 2 is about to jump over a cliff so that when you un-pause, they fall. Usually in “Super Mario Bros.”

Move the controller to the right when you press B (jump), as if moving it passionately/with feelings will make your character jump to the right longer/farther

When you lose a life for the first time, get yourself killed until you “Game Over” just so you can start fresh

Unintentionally shoot your base in “Battle City”

Trap yourself with a bomb in “Bomber Man”

Hit reset when Player 2 is winning