For the diplomats, a home away from home, even if only for last Christmas | Inquirer Lifestyle ❮ ❯ 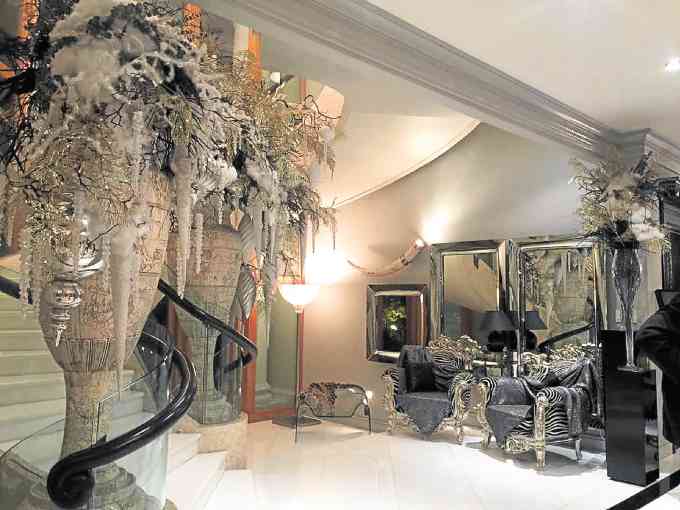 For the diplomats, a home away from home, even if only for last Christmas

Louie and Mellie Ablaza are the only couple we know who can host a sit-down dinner on Dec. 25—yes, Christmas Day itself—in their home and be assured of complete attendance.

The Ablazas have been doing this every year for 12 years now, so that they’re almost getting known for the yuletide dinner, apart from many other milestone parties. Usually, Christmas Day is spent with family, so it must be a testament to the couple’s drawing power that they’re able to entice friends to dress up in chic evening wear and squeeze the Ablaza dinner into an only-family-time holiday calendar.

“It’s our way of making our diplomat friends feel at home in our country at Christmas, when they’re away from home,” Mellie once told us.

The Ablazas are honorary consuls—Mellie (Amelia) to Guatemala and Louie (Luis Jr.) to Zambia—so they’re pretty much bonded with the diplomatic community.

The Ablazas are known for their jaw-dropper-parties particularly because their son, JunJun (Luis Ablaza, III), is into art and fashion, and is simply one of Metro Manila’s hardcore collectors.

The dinner experience begins as soon as the guest catches sight of the façade of the Ablaza home. It’s ablaze with dazzling lights and trimmings. That Christmas night, the fully lit Christmas tree with hanging umbrellas was an eye-grabber beside the fountain.

Inside, it was a wintry wonderland in choice corners of the home, complete with make-believe snow icicles, their icy whiteness creating a good contrast against the animal-print rugs and the overall African-wilderness theme that has come to be JunJun’s visual signatures (or one of them). The décor embraced the mother-of-pearl-wrapped columns in the living room, the columns extending all the way to the second floor.

In this visually lush environment stood out the modern minimalist corners and walls that displayed Arturo Luz, the works of the National Artist who is a vanguard of Philippine modern art.

Curtains in sumptuous fabrics hang down the arch separating the social area from the dining room, effectively hiding the dining room, as if to create suspense and drama. As the guests were called in to dine, after cocktails, the curtains parted, like in a theater, to reveal the rectangular dining table that sat 20.

Dinner was a visual theater experience, with a seafood Christmas tree standing in one corner—yes, crabs and other marine life, facsimiles of them, that is, hanging on the tree. They were set amid old corals—such a lush, over-the-top design that could have gone overboard, off the cliff, so to speak, but surprisingly, it worked.

Helping their parents entertain the guests were the Ablaza children Marc, Czarina and her husband, Dr. Jose Fernando Syquia, and JunJun.

Leading the guests were Austrian Ambassador Josef Mullner with wife Stephanie and young son David, who played the piano after dinner; Thai Ambassador Thanatip Upatising and his wife Monthip, who’s known in the social circle as the friendly “Madame Bee”; American Consul General Russel Brown; our Foreign Affairs Assistant Secretary Jerril Santos; John Hill; Mario Katigbak, the mover behind Bulgari and Hermès, whose enviable success has become the model of luxury brands in the Philippines; Cultural Center of the Philippines president Raul Sunico; Boysie Villavicencio, the fashion designer back in the ’80s and ’90s who’s now a visual artist.

Villavicencio is holding an exhibit of his latest works on Jan. 28 at Artologist Gallery (81 Xavier St., Greenhills).

It’s interesting how Villavicencio has crossed over to painting, he who has been known to be good friend to many of Metro Manila’s prominent women. The most influential among them was the late Chito Madrigal-Collantes, the doyenne of elite society herself.

Therefore, having Villavicencio as seatmate at the Ablaza dinner was a most regaling time. We shared reminiscences about Mrs. Collantes and Manila’s interesting women.

The sumptuous dinner was prepared by Chef Jessie.

After dinner came the evening’s highlight—performances of the Ablaza grandchildren and of the diplomat’s son, David Mullner.

Playing the violin were Czarina and Dr. Jose Fernando’s sons Alfonso, Agu, Azi and Amanu. We had never seen such intense concentration in a brood while their dad recorded everything with his videocam.

After this number, it didn’t take much coaxing to get the youngest, Azia, to sing.

What capped the evening was Sunico playing “Liebestraum” as the guests sat before the piano, savoring the residual joy that 2016 had brought.