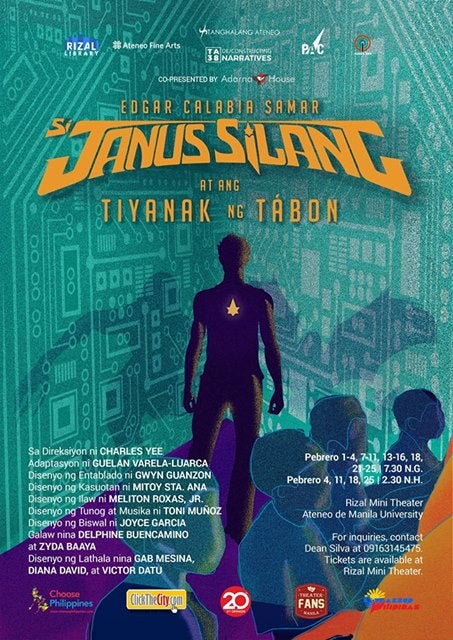 The story of teenager Janus Silang, who encounters supernatural creatures as he tries to solve the mystery of why players of an online game have died simultaneously, was published as a young adult novel by Adarna House.

Adarna House’s imprint Anino Comics then published a graphic novel adaptation illustrated manga-style by Inquirer’s To Be You section contributing artist Natasha Ringor. Samar has also been in meetings with ABS-CBN for a television adaptation.

“I’m excited. Nakakatuwa… that other people see how my stories have potential outside of their original form, the novel,” says Samar.

Tanghalang Ateneo’s artistic director Glenn Mas has asked permission to have the book adapted. He has enjoyed the book and felt it would translate well into other mediums like film and theater.

“Janus is a great character study and very easy to root for,” says Mas. “He has a painful coming-of-age story, a difficult rite of passage into adulthood.”

He also praised the inclusion of Philippine folklore and legends in the story.

Samar has another book that’s been adapted for stage. His children’s story, “Uuwi na ang Nanay kong si Darna,” was adapted into a play by Job Pagsibigan for the 2008 Virgin Labfest.

For “Janus Silang,” he gave Tanghalang Ateneo free rein. “I only check the script to catch any possible contradictions to the canon.”

Samar—who used to play “Command and Conquer: Red Alert” on a desktop when he was in high school, and these days plays “Clash Royale” on his smartphone—has produced a mythos for Janus Silang that encompasses a second book, “Si Janus Silang at ang Labanang Manananggal-Mambabarang,” and the conclusion of the trilogy, “Si Janus Silang at ang Pitumpu’t Pitong Pusong,” which he’s editing. (An excerpt from the third book was published in Inquirer’s Super last year.)

If he could be any of the creatures from the world of Janus Silang, he chooses the Manananggal.

“In the story, they’re creations of the Tiyanak. But they don’t remain subservient. They choose to do what they think is right. They are not blindly loyal.