My Miss Universe behind the scenes–in 1974 | Lifestyle.INQ ❮ ❯ 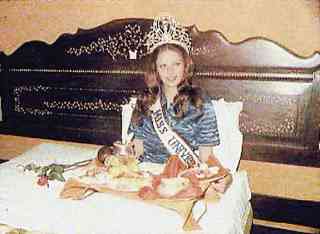 My Miss Universe behind the scenes–in 1974

I was an obedient student in college (also in high school and so on), so when my journalism teacher, Bibsy Carballo, told me to report to the newest and swankiest hotel in the country then, I did just that. No questions asked—when told to jump, my generation did, never asking why or where, but just how high, as they say.

And so just out of school (was it before graduation?), I reported for work at Philippine Village Hotel (PVH) because they needed an apprentice who could write press releases,  be a go-fer (go for this, go for that) and an assistant to PR director Marina Villanueva (who would be tourism attaché years later).

I just wanted something to do, after my all-knowing father pulled me out of school for a semester because of subversive activities (we tried putting up Kabataan Makabayan-SDK in our exclusive girls’ school). I believed in and trusted  our teacher Bibsy—we went where she sent us. Bibsy always knew best. (This woman, whom I owed my career to, passed away last December.)

Hardly did I know that I would be sucked right into the epicenter of excitement and action. It was Miss Universe 1974, one of the grandest of Miss Universe pageants, and PVH was the host hotel where the candidates were staying and some of the pageant activities held.

As it turned out, it wasn’t only work, it was life—for a good many weeks. We almost lived in the hotel, given the hectic schedule.

To an acolyte like me, that was sheer fun—being in the hotel from morning till the wee hours.  It was my first time to experience the luxuries of a five-star hotel, so that my work didn’t seem like work at all.

They came in batches. They all looked preternaturally beautiful to me. But early on, already gaining a following were Miss Aruba, Miss Wales, Miss Colombia and Miss Finland. Miss Finland was my favorite because she looked like a doll, and those blue eyes.

I’d catch the excitement even before office hours because big crowds would gather at the lobby and along the driveway, hoping to catch a glimpse of the candidates as they went in and out of the hotel.

My boss assigned me to attend to—and to pamper—the photographers and be at their beck and call for whatever information they needed. (That was how I learned to write captions.)

At night, we would watch as the candidates disco-ed at Par Avion, the hotel’s disco on the topmost floor—its panoramic windows allowing a sweeping view of the runway. PVH stood beside the airport; it still does, though now only a scraggly version of its old self.

It was at Par Avion where I first learned to say “Singapore Sling” or “Sweet Vermouth,” mimicking what others were ordering around me at cocktails and disco hour.

We’d gawk as the beauty candidates mingled with the guests, who were mostly Manila’s most eligible bachelors (and non-eligible). In those years, the candidates apparently were allowed their night life.

It was no surprise then that a few of the candidates ended up marrying some of  the Filipino eligibles.

When Miss Spain Amparo Muñoz was crowned Miss Universe, I remember the hotel grapevine echoing disbelief; she was below the radar. People weren’t expecting her to win.

And for the  new Miss Universe’s breakfast in bed shoot, the hotel was so new it had to scrounge around for the right silverware, which the banquet manager eventually produced (from her own family collection).

Like I said, I was writing press releases. The very first on the day after the coronation?

It was supposedly about how the hotel in-house astrologer/fortune teller predicted the right winner—the long-haired dark-haired Muñoz.

I protested and told the astrologer—“But you said the winner would be a blonde (obviously our fortune teller had Miss Finland in mind). I have that in my notes. Here, my yellow pad.”

And so dark hair it was—for Amparo Muñoz.