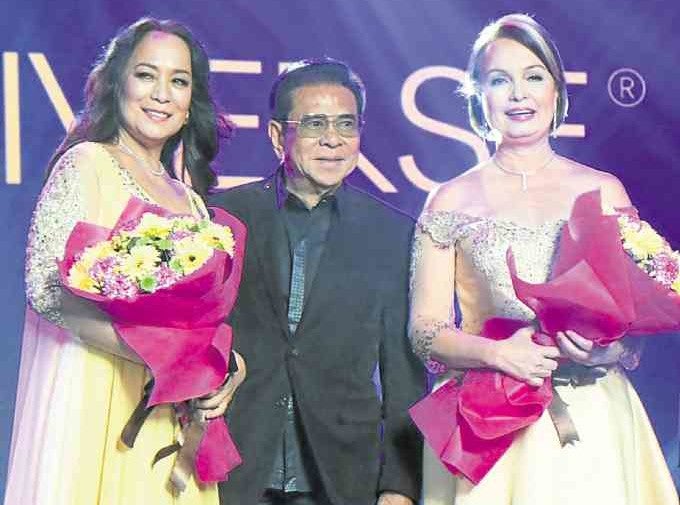 Your mantra for the week:  “When I hear of someone’s success, I rejoice for them knowing I am next.”

In keeping with the mood of the country at the moment, I would like to quote a prize-winning definition of success, a poem written by Bessie Anderson in 1904 for a contest conducted by Brown Book Magazine:

“He achieved success who has lived well, laughed often and loved much;

“Who has enjoyed the trust of pure women, the respect of intelligent men, and the love of children;

“Who has filled his niche and accomplished his task;

“Who has left the world better than he found it,

“Whether an improved poppy, a perfect poem, or a rescued soul;

These verses may also inspire the 2017 Miss Universe contenders in the Q&A segment.

Last Monday, I attended the “National Gift Auction”—a fashion show of gifts brought by 86 candidates for the 65th Miss Universe pageant, at the Forbes Ballroom of Conrad Manila.

The proceeds of the auction will benefit the Pass It Forward Foundation, which will, in turn, support the prevention of HIV which has grown by leaps and bounds in the Philippines, thanks to those who have been against the full implementation of the Reproductive Health Law.

Having seen all the 86 contestants, one can get totally overwhelmed by the proliferation of beauties from around the world. No wonder President Rodrigo Duterte could not help himself after meeting all of them, up close and personal, from expressing his admiration by remarking, “I hope this day never ends.”

The beauties were given a chance to model original creations by 86 Filipino designers—Rajo Laurel, Ito Curata and Frederick Peralta among them, giving their very best and, proving once and for all, that the Philippines is the Paris of the Orient.

The contenders were divided into three groups, wearing red, white and blue or the colors of the Philippine flag.

The ballroom was packed and I sat with Argentinian Ambassador Roberto Bosch with his wife Julia. To my right was Sri Lankan Ambassador Aruni Ranaraja, who was alone because her husband is Sri Lankan ambassador to Indonesia. (They visit each other every three months.)

I asked her and Ambassador Bosch what they observed was a distinct Filipino quality, and their answers were as follows:

Ambassador Bosch: “I have noticed that Filipinos do not know how to say no. They always say yes or opo. In Argentina, we are more outspoken and express what we think and feel.”

On the other hand, Ambassador Ranaraja said, with a little giggle: “Filipinos are the smile-iest people in the world… too, they always want to take pictures, so wherever we go we are constantly posing.”

When Miss Sri Lanka went on stage, Ambassador Ranaraja pointed out that Ms Jayathi De Silva is a scientist.

I asked Mrs. Bosch who she favors to win and she quickly answered, “Miss Brazil.” By the way, there is a striking resemblance between Madame Bosch and Miss Argentina Estefania Bernal.

The show was emceed by Martin Nievera, and the auction proper went relatively smooth, as orchestrated by Salcedo Auctions’ Richie Lerma.

In the audience that evening was Binibining Pilipinas Charities Inc. chair Stella Marquez Araneta, who was the first Miss International. She finally found time to attend a Miss Universe event, looking lovely and relaxed.

She was seated with her 1969 and 1973 Miss Universe picks, Gloria Diaz and Margie Moran.

At another table was elegantly dressed Duday Tuason, and Yoli Ayson, who celebrated a birthday last Wednesday. I also spotted the always well-groomed Elaine Villar.

By the end of the evening, I had come up with my top 12 choices, with their respective cycles including coronation night. I also looked at their birth years in Eastern astrology and the animal equivalent of the Western signs, thus, giving them two animal signs each.

(Please check my Fire Rooster forecasts that was featured yesterday, Jan. 28, on the front page of this paper. All these clues will give you an insight on the probable winners.)

Here then are my magic 12, listed along with their respective birthdays, cycles, Western and Eastern:

The 1st, or Sun cycle, starts on one’s birthday, which comprises the first 52 days. During this period, one can look forward to blessings of all kinds, from both expected and unexpected channels.

The 2nd, or Moon cycle, is the continuation of the first cycle, still positive especially when the moon is waxing and less when waning.

The 3rd, or Mars cycle, is when one’s physical prowess reaches a high point and gives us all the energy for activities that necessitate a lot of movement and exertion.

For the 4th, or Mercury cycle—rest, recreation and mentally relaxing activities are recommended.

The 6th, or Venus cycle, brings about our attractiveness and magnetism. People will always notice how well and pleasing we look. This period acts like a charm in our relationships, whether in friendship or romance.

The 7th, or Saturn cycle, is about positive and negative karma. This is the period when we harvest from our good and not-so-good deeds of the first six cycles. We get rewarded for our positivity or receive disciplinary action for our negative thoughts, words and deeds.

The 3rd cycle, in this case, Miss Colombia and Miss Belize, have been given an additional boost because of their double Rooster effect, and Colombia even more because of last year’s incident.

Take note that Miss Colombia 2015 was on her 7th cycle, when Pia Wurtzbach won while on her 1st cycle.

With all these indications, what will decide the top three on coronation night will be the Q&A segment.

I have an idea who these three will be, but I will keep that to myself.