‘You feel her hands, and they’re just as cold as yours’ | Inquirer Lifestyle ❮ ❯ 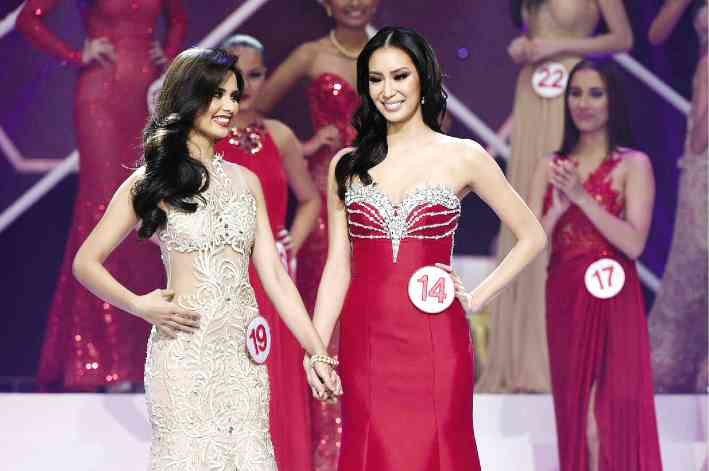 ‘You feel her hands, and they’re just as cold as yours’

Your heart is pounding. Your knees trembling. There’s a quiver in your voice, and it’s hard to look at anyone in the eyes.

Two of you have left; you feel her hands, and they’re just as cold as yours.

Everything feels surreal, as if it were only rehearsals.

That is how I was feeling right before I was declared 1st Princess of Miss World Philippines 2015.

Based on my experience and observation, there are two main reasons girls decide to join a pageant. The first is because of a childhood dream, the second is that it opens doors and provides opportunity.

My reason is the latter. In 2013, I was just out of college and I didn’t know what career path to take. I just thought trying out for a beauty pageant would be a good stepping stone for whatever I  decided to do. In 2015, however, I was motivated by the vision of Miss World, which is to make a difference by being an advocate of a specific cause.

But, no matter the motive, all the candidates have their eyes on one thing: the crown. Now imagine for a second your favorite reality show. It is exactly like that. There are good times, new experiences, new people and A LOT of drama.

Some candidates deliberately give other girls a hard time and  intimidate when they get too competitive. I knew of a couple of incidents when girls resorted to sabotage.

It’s a cutthroat environment —putting a bunch of girls together and making them compete against each other, while at the same time, you’re competing with yourself. Everyone has her insecurities, and being in the competition just intensifies them.

In the two times I joined pageants, I realized that, at the end of the day, the real competition is with yourself. You need to learn to block out negativity from others, motivate yourself every day to perform, do and look your best, and always  smile, no matter what.

It’s not only on pageant night that the judges determine the winner. Different pageants vary in terms of duration of competition; it could range from a few weeks to three months.

It’s a long process of events, guestings and minor competitions, so even if there isn’t always a score sheet, the candidates know they are always being judged. It can get exhausting. It’s really not for everyone; I’ve seen girls break down and quit in the middle of the competition.

You really have to be physically fit and mentally tough to come out on top. The girls start feeling emotional and tense when exhaustion kicks in, and even more so as pageant night draws near.

People think that having the prettiest face, the best walk and the smartest answer wins crowns. To some extent, yes, these are all part of the criteria for judging.

But what actually makes that one lady stand out in the group is when she shows grace under pressure.

Being exhausted and stressed but presenting yourself as calm, focused and confident on stage while all eyes are on you—that is what a girl needs to do to seal the deal on pageant night.

Some may argue that pageants objectify women and encourage girls to be superficial. This cannot be further from the truth.

Glamour is just one aspect of pageantry, and does not define it altogether. If you look past the hair, makeup, catwalk and photoshoots, you will see that beauty queens are role models, given a voice to influence others and make an impact in society.

Competing requires a great deal of preparation, which I think shows how dedicated you have to be and how much work is actually put in. Taking part in the competition can be rewarding in itself, and can open doors for the girls. I was “discovered” by my modeling agent after my first pageant, and that was the career path I took.

Other girls decide to join show business, become a host or an influencer, start a business; the possibilities are endless.

Some think that, to enter a pageant, you have to be perfect and the best version of yourself. I disagree.

Girls come prepared, but you never know exactly what you’re getting, so you adapt and improve yourself along the way. The competition itself is a learning experience.

I discovered so much about myself during both pageants that I wouldn’t have had otherwise. The experience really helped me mature as a young lady, and boosted my confidence. The most valuable lesson I learned is this: The outcome doesn’t determine what you take from the experience. —CONTRIBUTED