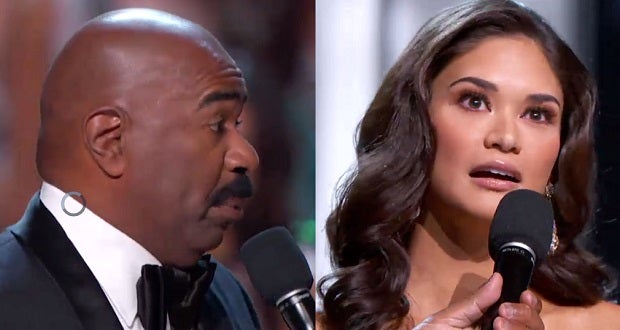 Harvey introduced Wurtzbach, dressed in fuchsia gown, during the opening of the 65th Miss Universe pageant at the Mall of Asia Arena in Pasay City.

In jest, Wurtzbach thanked Harvey “for making me the most popular Miss Universe.”

Harvey responded: “Thank you for making me the most famous host of Miss Universe.”

Harvey also faced the representatives of the Philippines and Colombia in this year’s pageant, who both made it to the Top 13. Miss Colombia Andrea Tovar told the host: “You know I love you, Steve.”

“I can’t believe this is happening again,” Harvey said after announcing Colombia and Miss Philippines Maxine Media consecutively in the Top 13.

“She just told me to be myself,” Medina said. CBB