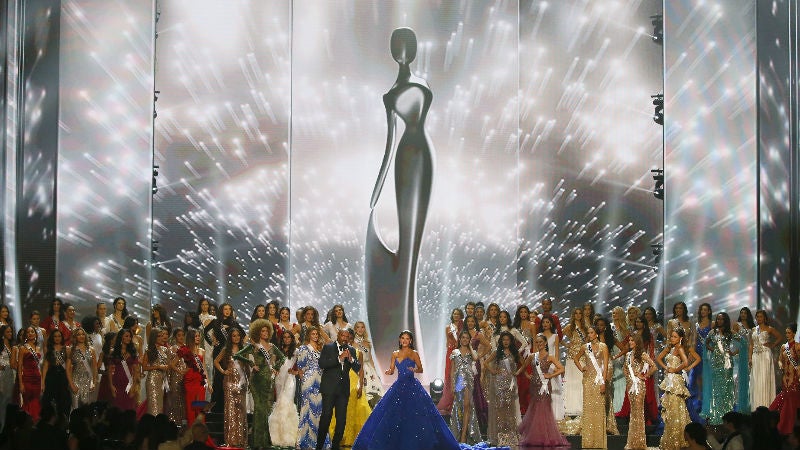 Spectators as excited as beauty contestants

Manila’s hosting of the Miss Universe pageant drew some of the best dressed from around the world, many proudly carrying—if not wearing—their flags to the packed SM Mall of Asia Arena in Pasay City early Monday morning.

Early morning in Manila turned into gala night for the event broadcast live at nighttime on the other side of the world as members of the audience filed to the arena gates in their best evening gowns, some looking like they were going to compete themselves.

The crowd was electric even on an early Monday morning, the excitement palpable as they witnessed the first Miss Universe hosting here after 23 years.

Pageant fanatics were among the most vocal, commenting after the Top 13 announcement that perennial front-runner Venezuela was out of the roster.

When USA and Mexico were called one after the other in the first elimination round, someone in the crowd made reference to US President Donald Trump’s controversial border policy.

“There should be a wall!” he yelled.

As expected, the Filipino-dominated crowd gave the most riotous cheers for Philippine candidate Maxine Medina.

“I’m so scared,” a spectator, who paid for a P4,800-ticket to root for the country’s candidate, said when American host Steve Harvey started to announce the contestants who made it to the Top 13.

“Go Maxine! Go Maxine!” the crowd chanted over a commercial gap before the last of the Top 9 was called.

Filipino fans were on edge in the Q&A portion when Medina was first to be called among the Top 6 contenders. Some could be heard loudly praying that she use a translator or that she give a good answer.

Some expressed dismay over her response in the question-and-answer round.

“[I’m] a little bit disappointed, but somewhat happy because she at least made it to the Top 6,” said Jonah Romero, 16, who came to the pageant wearing a blue gown designed after Miss Universe 2015 Pia Wurtzbach’s winning blue dress. She even wore a Miss Universe sash to complete the look.

Gay Cebuana beauty queen Rain Marie Madrigal, who came with her group of friends in full pageant garb, said Medina did her best.

“I think we should be happy that she really didn’t make a major mistake in front of the world audience,” she said.

Although Medina did not make the cut in the Top 3, fans still applauded her for her overall performance. “We are happy with Maxine’s achievement and we hope the entire Philippines will also feel the same,” said Arnold Mercado of top beauty camp Aces and Queens.

“She did her very best and we are glad that she made it to Top 6,” said Mercado, adding that Miss France Iris Mittenaere getting the crown was not a surprise since she had a strong show even in the earlier competitions. “We also heard that she really did good during the closed-door interviews.”

Fragrance mogul Joel Cruz said that Medina making it to Top 6 was already a big accomplishment. “There is no disappointment on my part. My God, Top 6! There were 86 of them,” Cruz said.

The audience welcomed several changes in the competition.

The Top 13 semifinalists were instantly put on the spot, not like in the previous editions when they stood only to acknowledge their placement.

Harvey engaged the semifinalists in a brief interview, one by one, immediately upon the announcement of their names. The Top 13 candidates were announced in three batches, with commercial breaks in between segments.

Freelance writer Victoria Bracken said the announcement by batches was “OK” because “it will be really boring if there will be no changes.”

Even some former Filipino beauty queens also welcomed the changes.

For 2012 Miss Supranational third runner-up Elaine Kay Moll, Miss Universe was sending the message that it was veering toward a different image through the quick chat with the semifinalists.

But if there was one thing that seemed to be missing, it was the reference to Filipino culture during the show.

Gil Salazar, who just got back from Macau last December, noted that during the pageant’s staging in the Philippines in 1994, “there were Filipino folk dances.”

He also said he preferred seeing the candidates having their own moment during the later stages of the competition.

For Monday’s program, multiple candidates appeared at one time in the Top 13 swimsuit round and the Top 9 evening gown round.

But for designer Joji Lloren, who watched the pageant live, the quick pacing was good, “in order to save time, and to make the production shorter.”

American George de Carlo, who came to the pageant to accompany his partner, the interpreter for Medina, also welcomed the changes.

“For a long time the format just went on forever. It’s good that they did a lot of things beforehand, instead of just carrying on as if it just started, how it was done before,” De Carlo said.

This is the country’s third hosting of the Miss Universe pageant, following the staging in 1974 and 1994.