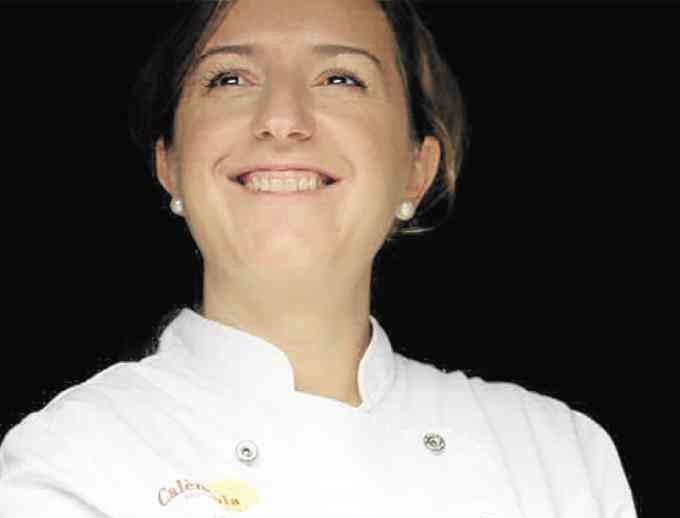 Maybe because they were women, I naturally gravitated to their talks in Madrid Fusion 2017, which happened Jan. 23-25 in Spain.

Maria Fernanda Di Giacobbe of Venezuela and Iolanda Bustos of Catalonia are trailblazers in the brash, male-dominated culinary world. With their gentle manners, they have put women on the forefront of the field as carriers of tradition.

Bustos’ subject was “Biodynamic Cooking,” which sounds scientific and esoteric, but really only means the use of fermentation in the kitchen. That should be familiar to Filipinos who love fermented products such as bagoong and buro.

First, she had to relate a bit of family history. Her father was an agriculturist and her mother cooked for their restaurant.

Catalan cuisine uses a lot of fermented products stored in large jars in the kitchen.

Twenty years ago, the Ministry of Health closed the restaurant on sanitation issues, because the jars were not hermetically sealed according to World Health Organization (WHO) guidelines.

But, said Bustos, the bacteria that causes fermentation dies in the absence of air.

Her restaurant, La Calendula, was, therefore, her way of avenging the closing of her mother’s restaurant. Why, indeed, would something so natural as fermentation be considered unhealthy?

She also recalled how WHO, seven years ago, also listed flowers as not suitable for eating. Then, when chef Ferran Adria used these in his cooking, flowers were delisted.

Bustos uses flowers to make a sort of cava aperitif in her La Calendula restaurant. She produced two types of taste—one clear water-like, and the other with a reddish tint.

The cava aperitif has very low alcohol content. It’s made from flowers picked in the area around her place, among them elderflowers—also called sauco in Catalan.

Biodynamic farming and cooking depend on the cycle of the moon—in farming, when to plant and harvest; in the kitchen, when to ferment.

When the moon is crescent, bacteria is most alive and good for cheese making. When it’s descending, the time is good for meat maturation, conserves and wines.

That calendar seemed simple enough, until Bustos talked about when the moon went into definite zodiac signs. But these were lessons she learned from her female ancestors, and which she expects to pass on to those who want to learn this natural technique.

Grandmothers and mothers are definitely sources of food knowledge, according to Maria Fernanda Di Giacobbe of Venezuela. Her country is a matriarchal society, she said, and wisdom and cooking come from its women.

This was why, when she launched her Bombon project, women were her principal movers.

She was presented onstage as the winner of the Basque Culinary World Prize, a contest that honors a person for his or her major contributions to the culinary world. Di Giacobbe was chosen from several finalists around the world for her chocolate candies, which today provide work to over 8,000 women in Venezuela.

What transformed her from being a chef/restaurateur with nine restaurants into a chocolatier was seeing a poster of a company that said its chocolate was made from Venezuelan cacao. It was “a moment of reckoning,” she said—realizing suddenly that Venezuela had its own special product.

Giacobbe closed her restaurants and concentrated on building Venezuelan chocolate. She tapped mothers and grandmothers who traditionally made fruit conserves and asked to cover these in chocolate. She also began using the products of her country, such as coffee and rum.

Starting with 30 women, her project spread throughout Venezuela, even into the Amazon, showcasing the project’s different products and flavors.

The award recognizes the change Giacobbe has brought to her country, which has been plagued with economic and social problems. Through her, cacao has helped transform the lives of Venezuelan women, and of many others in the country.

The women are now earning for themselves, there is a choco festival in different places, and about 700 women have received diplomas from the Simon Bolivar University after learning not only how to make chocolates, but also coding, photography, hygiene, marketing and logistics. They earned their diplomate in eight months after going to the university one day a week for study, then to the laboratory to make bombons.

What does the Basque Culinary World Prize mean to her and to her woman compatriots?

Aside from giving pride to her country, Di Giacobbe said the award restored the identity of cacao and its soul, and recognized the importance of women as the bearers of tradition.

And, she promised, “the heart of the movement will go on to Colombia and other Latin American countries.”

Due to numerous requests, the Doreen Gamboa Fernandez Food Writing Award has extended its deadline to Feb. 15. Please submit your 800-word essay on vinegar to [email protected]