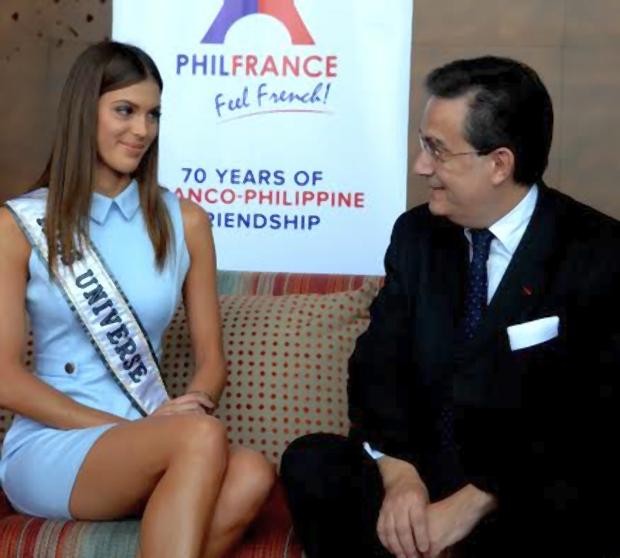 French Ambassador Thierry Mathou on Thursday said newly crowned Miss Universe Iris Mittenaere is the “embodiment of the modern French woman” and the “best French Ambassador to the Philippines.”

The two met again on Thursday afternoon before Mittenaere left the Philippines, a few days after the Miss Universe pageant was held here.

He said the beauty queen was “very clever” for mentioning Europe’s “open borders” amid the refugee crisis when asked about it during the pageant’s question and answer portion.

“France is an open country and she stood with our own values. She is not only beautiful, but she answered the questions very well,” the ambassador said.

Mathou also pointed out that Miss France Mittenaere was crowned in the same year that the Philippines and France are celebrating their 70th anniversary of bilateral relations and a year after Miss Philippines Philippines Pia Wurtzbach won the crown.

He called her “the brightest symbol of the spirit” of their newly launched PhilFrance: Feel French! festival.

“We are very proud that Miss Universe is a French lady, but we are prouder that her win took place here in the Philippines and that she received the crown from Miss Philippines Pia Wurtzbach during the 70th anniversary of French-Philppine diplomatic relations,” Mathou said.

“It’s a pure coincidence, and it’s a nice symbol of the friendship between France and the Philippines,” he said.

“Iris is now the best French Ambassador to the Philippines. I’m only a proxy!” Mathou said in jest. “She is the embodiment of the modern French woman and she will be, to some extent, also our ambassador.” /ATM