Love is lovelier the second time around | Lifestyle.INQ ❮ ❯ 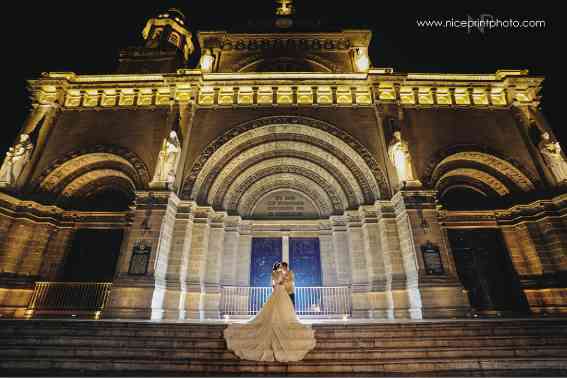 Mayor Emmanuel L. Maliksi and wife Jelyn (nèe Laosantos) in front of the Manila Cathedral after their wedding

Love is lovelier the second time around

The message on Jelyn Laosantos’ Facebook profile cover photo is made more meaningful when her union with Imus City Mayor Emmanuel Maliksi became official on Nov. 25, 2016.

The anticipated Friday affair transformed the historic Manila Cathedral into a most beautiful and memorable venue where a gathering of families and close friends witnessed Jelyn and Emmanuel solemnly take their vows as husband and wife.

Before the joyous trip to the altar, Jelyn and Emmanuel nurtured a love affair that endured more than a decade, a period of time that saw challenges and resolutions, discoveries and expectations, and some unfulfilled ones, acceptance and wisdom, with love eventually triumphing in the end.

Their friends said that if two people are meant for each other and to be together, it would happen eventually—and maybe in a way one could not imagine.

“Everything fell into place,” Jelyn shares, referring to the time their son was born four years ago.

“What we went through together, particularly the times that I had almost given up on him, but love prevailed. The birth of our son gave us purpose and the choice to choose happiness.”

Emmanuel believes that true love always brings difficulties, but the good side of it is that it gives him and Jelyn the greatest of energy to overcome them.

“We trust each other more and we’ve become a pair attuned to each other’s needs. We care a lot of for each other,” Jelyn says.

Started out as friendship

Like any relationships, Jelyn and Emmanuel’s started out as friendship.

Jelyn was a wide-eyed beauty who was into modeling part time and aspiring for beauty crown title.

Emmanuel, the son of a popular politician from Cavite, had been hurled into the vice mayoralty of Imus at a young age.

Then, he was married to Sheela Mae Santarin, a former 1993 Binibining Pilipinas Miss International, with whom he had two sons, Erwin Miguel and Emilio Nicholas.

In 2003, Emmanuel was so devastated when Sheela Mae died. Her untimely demise was a tragedy, but that made him a more patient and responsible father to his two sons.

Emmanuel still mourns the death of Sheela Mae, but he loves the memory of her in heavenly peace with the Lord.

He knew his wounded heart would heal in time, and when it did, the memory and love for his lost wife would be sealed in his heart to comfort him.

Emmanuel and Jelyn were introduced to each other when Jelyn went to Imus to compete for the Miss Imus pageant.

She was encouraged to join the pageant after joining Ponds Cream Circle of Ten Contest at ABS-CBN.

She, together with other contestants, became friends with Emmanuel and other personalities in Imus.

They would go out on several “gimmicks” or gatherings, but no sparks flew; there was no racing hearts or skipping of a few heart beats.

“In fact, it was one other contestant who had a great crush on Emmanuel,” she enthuses.

As a representative of Imus, Jelyn also joined the Miss Cavite pageant, and subsequently won the title.

This gave her more opportunities to be with Emmanuel on several public occasions.

This was also the chance for Jelyn to know more about her future husband.

Jelyn and Emmanuel’s friendship blossomed over a period of time, with Emmanuel becoming close to Jelyn’s parents and frequently paying them a visit.

She remembers a family trip to Baguio with Emmanuel that made her take a real hard look at him as a person.

“That was the turning point,” she says. “I began to understand him as he told me the current problem he was having then. He has a kind heart. And after that, we became really close.”

“I could not fully describe the elegance of those eyes,” Emmanuel said. “It took only a few minutes to fall in love with those so beautiful eyes.”

Still a student at St. Paul College in Manila, Jelyn had no inkling that Emmanuel was already courting her.

When one time at a date in Hyatt, Emmanuel asked her if he has a chance for her affections; Jelyn articulated in so many words that she was not yet ready and that their friendship was okay as it was.

But Emmanuel somehow took that as a “yes.”

One month later, he presented Jelyn, to her surprise, with flowers and a card expressing “Happy Monthsary.”

The rest, they say, is history.

“He once told the person who interviewed him for video coverage that I complement him. The things that he couldn’t do for himself and to the people who are important to him, I was able to do.”

For the more than 13 years that they were together, Jelyn says she witnessed Emmanuel’s transformation into a loving and caring person, and responsible and hardworking public servant.

“I saw his dedication to serve the people. I always find him at three in the morning still working.”

In February last year, Jelyn got the surprise of her life when Emmanuel proposed to her.

The Solemare in Manila was packed with people celebrating Jelyn’s birthday.

Being the president of Rotary Club of Imus, the members of the organization treated her to a birthday party.

But as the program winded down, she heard music and saw Emmanuel, kneeling in front of her to propose to her.

“I couldn’t control my tears. I was crying. But I promised myself, on my wedding day, I won’t anymore. Everything fell into place,” Jelyn shares, referring to the time four years ago when their son, Edric Jonathan was born.

Love, to Emmanuel, is lovelier the second time around.

As in the lyrics of that wonderful song by legendary Frank Sinatra, “There are those who will bet love comes but once and yet, I am oh so glad we met the second time around.”

Emmanuel says Jelyn is the most wonderful person to him and his family. “Jelyn made me the happiest I have ever been.”

And to Jelyn, Emmanuel is like nobody, who she loves truly and faithfully. —Contributed