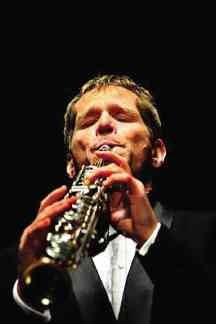 There’s good reason to fly to Bacolod next week: six artists, led by an acclaimed Swedish saxophonist and five exciting Filipino acts, compose the lineup at the 2017 Bacolod Jazz Festival to be held Feb. 17 at the La Proa Ballroom of L’Fisher Hotel.

Anders Paulsson, classically trained at the Royal College in Stockholm, is regarded as one of the world’s finest soprano saxophonists. He has performed as soloist with the Royal Philharmonic Orchestra in Stockholm, the Swedish Radio Symphony Orchestra and St. Petersburg Philharmonic. He has also 22 CDs, notably his pioneering recording, “Swedish Concertos for Soprano Saxophone,” with  music by Anders Eliasson, Rolf Martinsson and Sven-David Sandström.

To have an idea of his talent, log on to http://anderspaulsson.se/ and check out videos of his performances, including the song “Danjugan Sanctuary”—incidentally composed in support of the Philippine Reef and Rainforest Conservation Foundation in Bacolod—from a June 2006 live television celebration of the 60th birthday of King Carl Gustaf XVI of Sweden, reportedly seen by 20 million viewers.

The Bacolod Jazzfest’s roster of Pinoy artists is led by the AMP Nonet, a trimmed down lineup of the AMP Big Band—arguably the country’s leading jazz orchestra; Joey Puyat, a seasoned guitarist who has played with some of the country’s best musicians and is currently a member of the Blue Rats and Kiss the Bride; Kat Agarrado of Sinosikat and Manila Blues Experience fame; The Projects, a young band from Bacolod; and Working Stiff, a regular band at Strumm’s Makati composed of veteran musicians including Kedy Sanchez and Lorry Zamora.

If you’re coming from Manila, Cebu Pacific flies daily to Bacolod, and you can stay for a night or two at Go Hotels Bacolod.

A young talent to watch out for is Gabrielle, who sings at Picobello, an Italian restaurant in Davao City.

But when she played the ukulele while singing an original, “A Song Inspired By You,” we felt this young lady is in for the long haul.

And when she ended her set with Randy Crawford’s “People Alone” and “One Hello,” and the Etta James classic “At Last,” we knew Gabrielle is being guided by the right people.

Something to look forward to, if you live south of the metro: “Heart Beats,” a pre-Valentine concert featuring South Border, Up Dharma Down, Jinky Vidal, DJ Matthew Carbonell on Feb. 11, 7 p.m., at SM Bicutan, Parañaque.

Before the concert is a special outdoor screening of the movie “This Time” starring James Reid and Nadine Lustre, 5 p.m. at the Open Parking Bldg. A of SM Bicutan.

Ivy Violan, the singer with the powerful vocals and renowned for winning a string of international song competitions, is back after a four-year stay in the United States. She’ll be performing in two homecoming shows with her former Sangkatutak band mate, Richard Merk, on Feb. 10 and 17 at Vu’ Sky Bar and Lounge, Marco Polo Ortigas Manila.