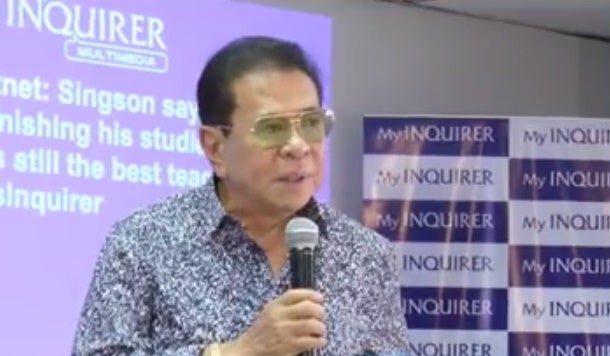 He may have shelled out billions of dollars for the Philippines’ hosting of the Miss Universe pageant, but for Luis “Chavit” Singson, the money he poured in was more of an investment than a loss.

(We didn’t think of earning when we were still negotiating. I don’t consider it as a ‘loss’—it’s an investment as long as there are many tourists. It’s easy to recover once there are a lot of tourists.)

(There’s no substitute for value, this is the biggest promotion of our country because 200 nations were watching.)

Singson, president of the LCS Group of Companies, said the entire cost of hosting the international beauty tilt in the Philippines was pegged at US $15 million.

The government did not spend a single centavo in hosting Miss Universe, as pronounced by President Rodrigo Duterte.

Singson said he was hoping that the hosting would result in more tourist arrivals, especially that the Miss Universe candidates expressed intention to come back to the country.

(Everyone’s saying they’re coming back. They were amazed at how this country is beautiful. Everything we discussed was great.)