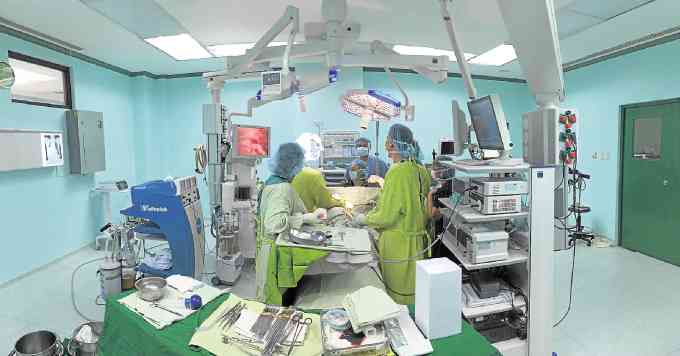 Lung disease is among the top three causes of cancer deaths in the Philippines. But while that reality is alarming, the good news is, patients now have access to some of the best chest and pulmonary disease treatment facilities being used by Filipino doctors.

In recent years, the Lung Center of the Philippines, a government hospital, has been at the forefront of treating patients with the latest techniques and technologically advanced equipment.

“The surgical approach to lung cancers and other diseases is shifting to minimally invasive techniques,” said thoracic surgeon Dr. Edgardo Fullante. “This is surgery using small skin incisions. The Lung Center has acquired top-of-the-line equipment for this.”

In 2013, the Lung Center opened the Minimally Invasive Thoracic Surgery (MITS) suite, where the Karl Storz Image1 S Spies, a high-definition camera, is being utilized for capturing accurate images of tumors.

“The excellent imaging by the Karl Storz camera gives patients comfort and less pain,” said Dr. James Monje, consultant anesthesiologist. “There was this case of a 76-year-old man with cancer in his upper right lung who underwent the procedure. Four days after the surgery, he was able to go home. This wouldn’t be possible in conventional open surgery.”

“Some 80 percent of operations done in the hospital are already minimally invasive in nature,” said Dr. Fullante.

This year, the Lung Center is celebrating its 35th anniversary. Last year, it hosted a workshop to promote VATS and minimally invasive thoracic surgery in the country, which was attended by at least 20 specialists.

During Lung Month, which is observed every August, free clinic consultations are offered to the public.

The Lung Center is increasing its bed capacity from 251 to 500 in the next three to four years, as mandated by the Duterte administration’s health agenda.

The hospital is offering new diagnostic and treatment programs for the public, including charity patients who can access world-class facilities.

Smoking is the leading cause of lung disease in the world, has also been associated with the development of chronic obstructive pulmonary disease (COPD) or emphysema, responsible for at least 70 percent of lung cancers.

Smoking has also been implicated in the development of bullous lung disease, which can lead to a complication called spontaneous pneumothorax.

The Lung Center is strictly a no-smoking hospital, and has been several times the recipient of the Department of Health (DOH) Red Orchid Award (given to local government units or LGUs with tobacco-free environments).

It also has a Smoking Cessation Clinic, designed to help chronic smokers stay nicotine-free through professional counseling and medical guidance.

For early lung cancer detection, the Lung Center is also campaigning for a nationwide lung cancer screening program through the use of low-dose chest CT scan.

While the hospital caters mainly to adult patients, there is a growing number of children with lung and chest diseases seeking treatment.

Dr. Fullante noted as well that, aside from lung cancer, TB is one of the most common cases diagnosed at the Lung Center. “This is not surprising, since the Philippines is one of the countries noted to have a high TB burden in Asia and around the world.”

The Lung Center has also seen rare thoracic and pulmonary tumors and diseases among patients.

But why are there smokers who are past 60 and yet show no signs of lung disease?

There is also a growing number of female nonsmokers who have lung cancer. The cause, said Dr. Fullante, has yet to be determined.

“Cancer development is a continuum,” he explained. “It is a complex process that is the culmination of breakdowns in cellular repair mechanisms. Some of us have more resilient repair mechanisms than others, which explains why some people develop cancer earlier than others.”

Aside from minimally invasive thoracic surgery and video-assisted thoracic surgery, the Lung Center is also doing “sleep studies” that identify airway problems which are background causes of heart attacks and strokes.

For the past three years, the Lung Center has been working to develop the country’s first lung transplantation program.

The Lung Center is the only tertiary specialty hospital in the country dedicated to the treatment of pulmonary and chest diseases. Since the hospital is focused on the management of a specific subset of diseases, it can channel its resources to better equipment and services, unlike general hospitals or private hospitals which have to cater to the general population.