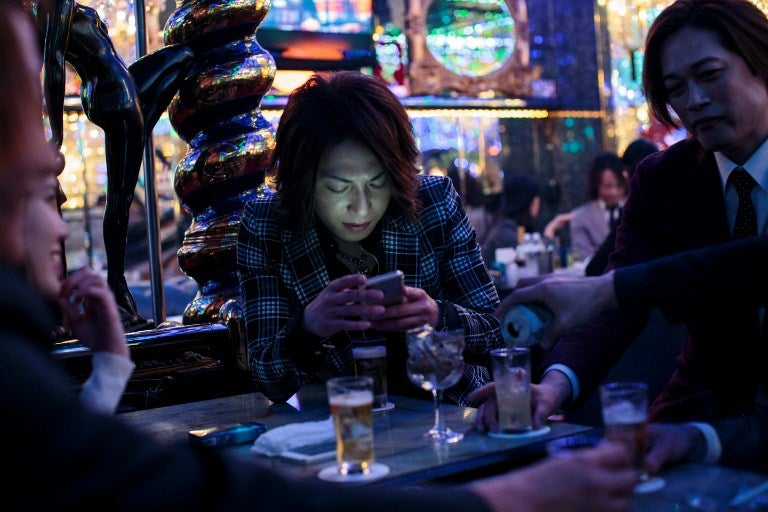 In this picture taken late on January 27, 2017, a male host checks his phone as he sits with other hosts and a female customer at a host club in the Kabukicho red-light district in Tokyo. Host clubs are a 10 billion USD industry in Japan with some 800 venues nationwide. Around 260 of those are located in Tokyo, most squeezed into Kabukicho's narrow streets where flickering neon signs display the air-brushed faces of hosts outside clubs with names such as Romeo, Gatsby and Avalon. / AFP PHOTO / BEHROUZ MEHRI / TO GO WITH Japan-culture-lifestyle-hosts,FEATURE by Alastair HIMMER

In Japan, lonely women pay big for time with Lotharios

TOKYO, Japan — Cigarette smoke hangs thick in the air of a Tokyo nightspot as Aki Nitta sips champagne with a trio of sweet-talking Lotharios peddling fake love at premium rates.

In a country which has lost its mojo, many wealthy Japanese women spend eye-watering sums on male hosts in return for an evening of sweet talk, flirting — and often sex.

“I want my heart to flutter,” Nitta told AFP at a popular club in the Kabukicho red-light district lined with chrome and mirrors.

“Japanese men aren’t very attentive and don’t show their feelings, but hosts treat you like a princess. I want to be pampered and I don’t care how much it costs,” she adds.

The 27-year-old businesswoman from Nagoya, spends around $10,000 a month on the object of her desire — a faintly androgynous beau with bleached hair and a boyish grin.

But some big-spenders splurge over $100,000 in a single night to have their egos stroked by smooth-talking rental Romeos who themselves can earn five times that amount in a good month.

There are a growing number of wealthy and successful Japanese women that have become frustrated with traditional dating and instead prefer to focus their romantic energies somewhere they are guaranteed to be treated well.

“I’m paying for time, rather than men,” explained Nitta. “Time is more important to me so I want to live for now, without any regrets.”

Many women — ranging from 20-somethings to those in their sixties — lavish expensive gifts on their favorite hosts, buying them diamond watches, luxury cars, even apartments.

“When I was 20 a customer bought me a Porsche,” said former host Sho Takami, who owns a chain of clubs and likens a host’s role to that of a psychiatrist, with benefits.

“It’s a 24-hour job,” insisted the 43-year-old after arriving for work in a chauffeur-driven Rolls Royce.

“Our real work starts after hours — going for drinks with customers, crawling into bed at 9am, meeting another one for lunch,” added Takami, who is set to open a host club in Las Vegas next year.

“It’s important the customer believes there’s a chance of love. After all that’s how you get her to come to the club and spend money,” Takami explained.

Host clubs are a $10 billion industry in Japan with some 800 venues nationwide.

Around 260 of those are located in Tokyo, most squeezed into Kabukicho’s narrow streets where flickering neon signs display the air-brushed faces of hosts outside clubs with names such as Romeo, Gatsby and Avalon.

Hosts have been compared to male geishas and Takami believes the culture, which began in the early 1970s, empowers women.

“A host’s job is to support a lady’s heart,” he said. “We’re here to encourage women’s social advancement. It used to be considered a bit vulgar to party with hosts.

“But times have changed. These days being able to let your hair down at a host club is a mark of status or success,” he added.

Japan’s hosts, denizens of the night instantly recognisable by their spray tans, crimped long hair and tight-fitting suits, are often accused of preying on women’s emotions.

“The customers are buying affection,” shrugged ex-host Ken Ichijo on the terrace of his penthouse flat.

“We’re selling them dreams, so you lie about loving them in return for serious money,” added the 38-year-old club manager, freshly blow-dried and shirt open to reveal a medallion.

“That leaves a bad taste for some people who think we’re just ripping girls off.”

Ichijo argues that it is simply a case of supply and demand.

“Hosts exist to fill a void in someone’s life,” he said. “In this business, the host is the product. We pamper to a woman’s every need — listen to her problems, tell her she’s beautiful, act out her fantasies.”

But the promise of sex is still dangled as bait in a cutthroat industry, admits Ichijo, whose plush apartment screams bling.

“Sex is not necessarily part of a host club’s service,” he said. “But it is part of trying to satisfy the customer’s needs.”

Japan’s shrinking birthrate has been blamed in part on a growing social trend known as ‘herbivore men’ — those who shun carnal pleasures and machismo in favour of the quiet life.

But libidos rage among the coiffured gigolos at the Top Dandy club, where sex worker Megumi Suzuki is a regular.

“Hosts are charming and they understand a woman’s feelings,” purred the 27-year-old as a snake-hipped host in leather pants and winklepicker shoes lit her cigarette.

“I come here to blow off steam. The men are like sparkly things — I could come every day and never tire of them.”