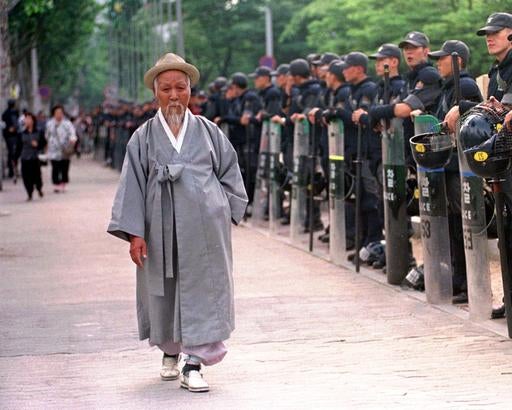 An elderly man wearing traditional Korean costumes walks past a police line as workers stage an anti-government rally calling for job security, at Chongmyo Park in Seoul, South Korea While most people born in rich countries will live longer by 2030 with women in South Korea estimated to reach at least 91. Americans will have among the lowest life expectancy of any developed country, a new study predicts. AP FILE PHOTO

LONDON — While most people born in rich countries will live longer by 2030 — with women in South Korea projected to reach nearly 91 — Americans will continue to have one of the lowest life expectancies of any developed country, a new study predicts.

Scientists once thought an average life expectancy beyond 90 was impossible but medical advances combined with improved social programs are continuing to break barriers, including in countries where many people already live well into old age, according to the study’s lead researcher, Majid Ezzati of Imperial College London.

“I can imagine that there is a limit, but we are still very far from it,” he said.

Ezzati estimated that people would eventually survive on average to at least 110 or 120 years. The longevity of South Korean women estimated in 2030 is due largely to investments in universal health care, he said. South Korea also led the list for men.

“It’s basically the opposite of what we’re doing in the West, where there’s a lot of austerity and inequality,” he said.

Ezzati and his co-authors used death and longevity trends to estimate life expectancy in 35 developed countries. The calculation is for a baby born in 2030. The study was published online Tuesday in the journal Lancet.

Women were ahead of men in all countries. Behind South Korea, women in France, Japan, Spain and Switzerland were projected to live until 88. For South Korea men, life expectancy is expected to reach 84. Next were Australia, Switzerland, Canada and the Netherlands at nearly 84.

At the bottom of the list: Macedonia for women at nearly 78, and Serbia for men at about 73.

While some genetic factors might explain the longevity in certain countries, social and environmental factors were probably more important, Ezzati said.

The study estimated that the U.S., which already lags behind other developed countries, will fall even further behind by 2030, when men and women are projected to live to 80 and 83. American women will fall to 27th out of 35 countries, from their current ranking of 25, and men will fall from 23rd to 26th.

The researchers note that among rich countries, the U.S. has the highest maternal and child death rates, homicide rate and is the only high-income country without comprehensive health care.

In an accompanying commentary, Ailiana Santosa of Umea University in Sweden wrote that the projections raise “crucial issues” about which strategies are needed to tackle worsening inequality problems.

“Achieving universal health coverage is worthy, plausible and needs to be continued,” she said.

The study was paid for by the U.K. Medical Research Council and the U.S. Environmental Protection Agency.