Reduced-sauce, no-sugar adobo–just the way her mom and grandma did it | Lifestyle.INQ ❮ ❯ 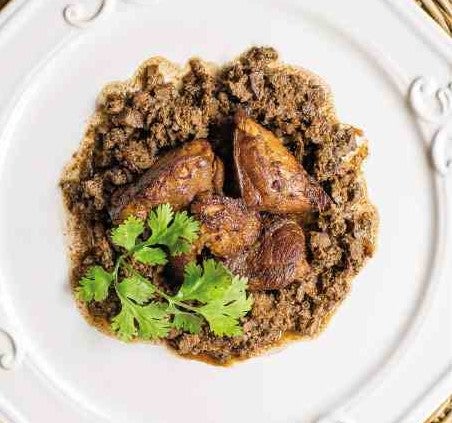 Reduced-sauce, no-sugar adobo–just the way her mom and grandma did it

For chef Bambi Sy Gobio, the adobo should be extra tender and simmered until very little oily sauce is left in the pan.

Although it comes out a bit darker than its usual brown hue, Gobio’s adobo tastes richer and more flavorful, as it is delicately thickened with tons of crushed pork liver.

“That’s how my lola (Cornelia) and my mom (Lourdes) would cook their adobo,” says Gobio. “Less sauce but never dry. The Chicken and Pork Adobo sauce is reduced to a bare minimum until the meat is almost drenched in oil.”

Gobio recalls how her mom would prepare a big batch of adobo cooked in a huge Magnalite pot. The meat was prepared in equal proportion—three kilos of pork (a combination of kasim and liempo cut two-inch thick), three kilos chicken (thigh and drumstick) and three kilos pork liver (chunks and crushed).

Her mom would then store them in several ice cream containers and keep them in the freezer. She knew that adobo tastes better when constantly reheated.

“My mom would use only Kikkoman soy sauce and Del Monte vinegar,” Gobio says. “No other brands.”

Gobio would stand beside her mom and watch her cook adobo in the kitchen. She just had to follow her mom’s style.

“My mom was a purist, so to speak. We don’t put sugar in our adobo even if we are Chinese. She was very rigid. If you deviate, you’d get slapped,” Gobio says.

The family prefer their adobo on the salty-sour side. On Sundays, they would make the reheated adobo as filling for breads like pan de sal.

When Gobio opened her restaurant, Restaurante Pia y Damaso, at Greenbelt 5 in 2007, she had to serve the heirloom recipe, but with some adjustments since customers clamor for a bit more sauce in their adobo. Her adobo is one of the resto’s best sellers.

“It’s practically the same recipe except that I don’t reduce it. I have to keep it with some sauce for those who want it drizzled on top of their rice,” Gobio says. The adobo can be paired with a bowl of mongo puree or bangus sinigang in guava.

Gobio started cooking at 6 years old. She would read all her mom’s cookbooks and even her lola’s wartime Betty Crocker books in black and white. She has a degree in Hotel and Restaurant Administration from University of the Philippines. She pursued culinary arts at Culinary Institute of America in New York, then had stints in restaurants in the United States and in Toronto, Canada.

She came home in 2001 and became food editor at Good Housekeeping and Metro Magazine. She was the chef and part owner of Fidel restaurant in Malate before putting up her own restaurants—Damaso and Luscious at Medical City and Metrobank Card Tower. She also does private catering in her own home in Greenhills for small, prebooked lunches, dinners and parties for a minimum of 8 to a maximum of 32 people.

Combine all ingredients in a large pot and add water to cover. Boil until fork-tender; remove from the pot. Fry meat pieces in oil until golden and return to the pot. Chop some liver pieces and add to the sauce. Simmer until sauce is reduced to desired consistency.