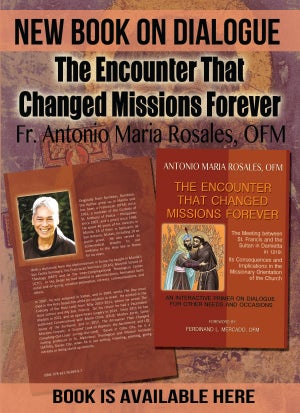 The book is on dialogue as represented in the encounter between St. Francis of Assisi and Sultan Melek-El-Kamel in Egypt in 1219. Though the encounter might not have made an impact at the time, its effects on the missions in the succeeding centuries have been considerable.

In 1221, St. Francis wrote the first rule of a religious order that spoke of the missions, specifically in Moslem lands.

Aside from presenting the historical encounter, the book is also interactive with points, reflections and considerations on dialogue in general, considered essential in many aspects of evangelization today.

The book will be launched at the St. Bonaventure House, Lanang, Davao City, on February 27. For information on the book, e-mail <[email protected]> or check the FB account: Antonio Maria Rosales.
Father Rosales (cellphone no. 0905-2690638) is now based in Punta Princesa, Cebu City. He also teaches theology at the St. Alphonsus Theological and Mission Institute in Davao City.

Radio Veritas on Edsa
As part of its’ special programming for the 31st observance of EDSA People Power Revolution, Radio Veritas featured yesterday (Feb. 25) the former president of St Scholastica’s College as well as a religious sister of the Cenacle and certified teacher of zen meditation who joined protest marches against the Marcos dictatorship.

Sister Mary John Mananzan, OSB, and Sr. Sonia Punzalan, RC talked about the participation of nuns and members of other religious orders of the Catholic Church in the struggle to depose the dictatorship and restore democracy in the country,

Last Feb. 24, the High Mass at the Mary Queen of Peace Shrine (Edsa Shrine) in Quezon City by Fr. Larry Abaco, rector, was aired live by RV.
Edsa Revolution is said to be the first event in the history of the world to be ran by a Catholic radio. During that historic time, RV did not just merely document the unfolding events, it participated in them.

It was through RV where the late Jaime Cardinal Sin, the archbishop of Manila, pleaded support for then vice-chief of staff Fidel V. Ramos and defense minister Juan Ponce Enrile who had broken off with Marcos.

As response to Cardinal Sin’s call, nearly two million people gathered on Edsa and formed a human barricade between Camp Crame and Camp Aguinaldo. Prayers and rosaries strengthened by faith were the only weapons that the Filipinos used to recover their freedom from the dictatorship.
RV laterreceived the Ramon Magsaysay Award for Journalism, Literature, and Creative Communication Arts. It was cited forits crucial role in using the truth to depose an oppressive and corrupt regime and restore Filipino faith in the electoral process.

Letter to Cardinal Sin
Archbishop Socrates Villegas of Lingayen-Dagupan has decried the “rape” of EDSA People Power with the “four glorious days of February 1986 now dimmed.”

Villegas decried the “relentless killings of the poor in the name of change,” adding “the glory now flickers in the darkness of fear and terror again.”

He said the death toll in the government’s drug wars has reached 7,600 in seven months. It is quite possible the death toll exceeds the number of martial law victims, he added.

“It is a nightmare, Your Eminence! It is a shame,” Villegas said in a letter to his former boss, the late Cardinal Jaime Sin, who played a major role in the relatively peaceful uprising.

“The bloodless revolt now stained by the blood in our streets and street gutters. The statistics of unresolved murder continues to rise and not a single one has been investigated and brought to justice,” he said.
Villlegas also lamented the hero’s burial for the late dictator Ferdinand Marcos as well as the attempts to “rewrite the history”.

“History books are rewritten. Historical memory is revised. The hero is a villain. The plunderers are now heroes,” he said. “Thank God, Eminence, you did not see these days we are going through.”