‘Prelude to Macbeth’: Unsettling–as it should be | Inquirer Lifestyle ❮ ❯ 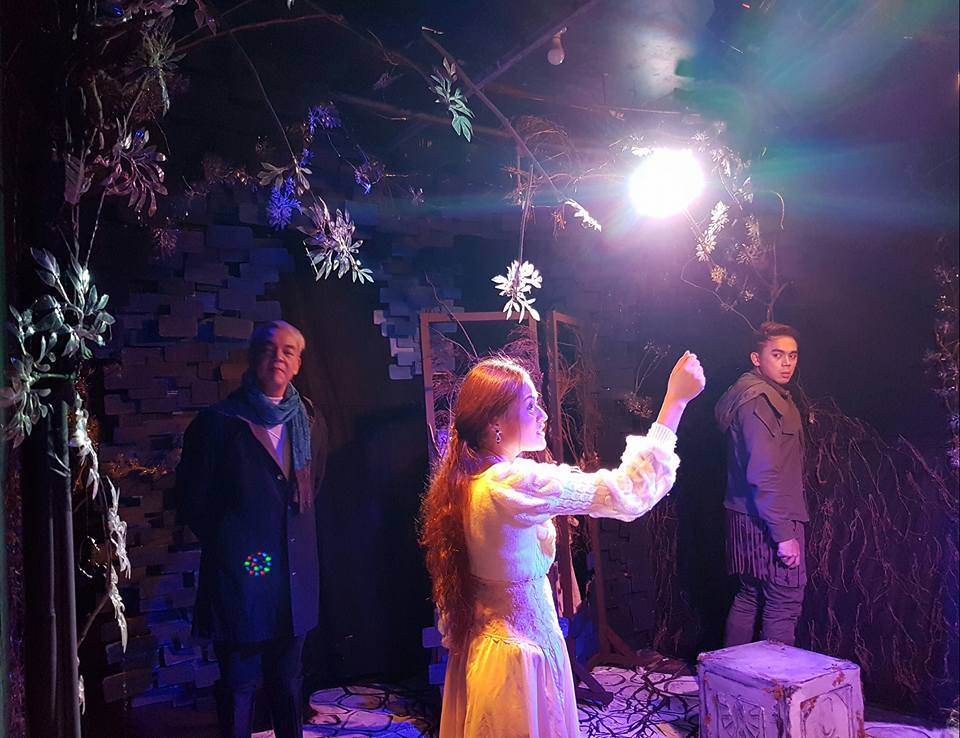 ‘Prelude to Macbeth’: Unsettling–as it should be

Artist Playground’s staging of James Chalmers’ “Prelude to Macbeth” was a study in contrasts.

Everyone knows (or should know), of course, what happens to Macbeth, Lady Macbeth and Duncan in the Shakespeare telling. This play, however, tells us why.

The theatrical style of William Shakespeare is a well-known thing. It is unsubtle, sometimes preachy, and prone to monologues that stick in the mind. A good pastiche will copy his style while retaining its own voice.

Here, Chalmers’ spin on the story appears to have both succeeded and failed. These flaws should have hindered the play, but “Prelude to Macbeth” is adept at turning its disadvantages to advantages. And what failures there were were turned on their head by the very competent young actors of Artist Playground.

Every jarring error or inconsistency turned out to be a correct stylistic choice, judged wrong only because it was unsettling—until one realized that the play was meant to be unsettling.

The infamous witches, for a start. Kia del Rosario, Princess Tuason and Jeremy Cabansag were all appropriately creepy, if in an outlandish, over-the-top manner. So much of their performance appeared to amount to interpretative dance—until I saw the scene in which they confronted Lorna Stewart, the future Lady Macbeth.

Until that point, they were basically walking special effects, too otherworldly to appear human. That changed when they actually started conveying the prophecies for which they are so renowned. The flashes of very human cunning and will to power added gravitas to key moments, justifying their otherwise over-the-top weirdness.

This is Artist Playground’s first attempt at elevated language, and it showed. The blank verse did not always flow naturally, and this was either a happy accident or an inspired artistic decision.

Catherine Go as Lorna/Lady Macbeth, in particular, jumped from pantomime seductress to rising supervillain in ways that showed not merely her character’s youth, but also a degree of highly appropriate schizophrenia.

This applies not only to emotion, but also to delivery. When Duncan was suddenly shouting after a certain plot twist, it felt overacted. But its contrast to the intensely authentic expression of contempt that followed highlighted the fact that Duncan, while certainly in control of the situation, was not entirely sane.

But this also appeared to be a deliberate choice by director Roeder Camañag; these uncomfortable yet perfectly acted scenes spotlighted Lady Macbeth during the time of her life when her womanhood was a favored tool and not a liability.

Paul Jake Paule did handsome-broody-lonely very well (he and Go were quite adept at using their eyes), but he hesitated during some of his lines in ways that suggested memorization issues rather than selected dramatic pauses.

When it came to dressing these characters, Duncan and Macbeth’s outfits were too clean and modern to look like Scottish battlefield royalty—an unsettling contrast the play could do without.

The choreographer, meanwhile, deserves compliments for a play that made superb and creative use of an extremely limited space.

This play refused to ever let its audience feel comfortable. It was not emotionally realistic in the way one expected from a modern play. The realistic emotion was in us, the audience, squirming at the way in which true evil pulled characters into uncanny valleys where they would end up becoming powerful, memorable—and not entirely human. —CONTRIBUTED