‘My Name Is Asher Lev’: ‘The demonic and the divine’ in a soul-searching drama | Inquirer Lifestyle ❮ ❯ 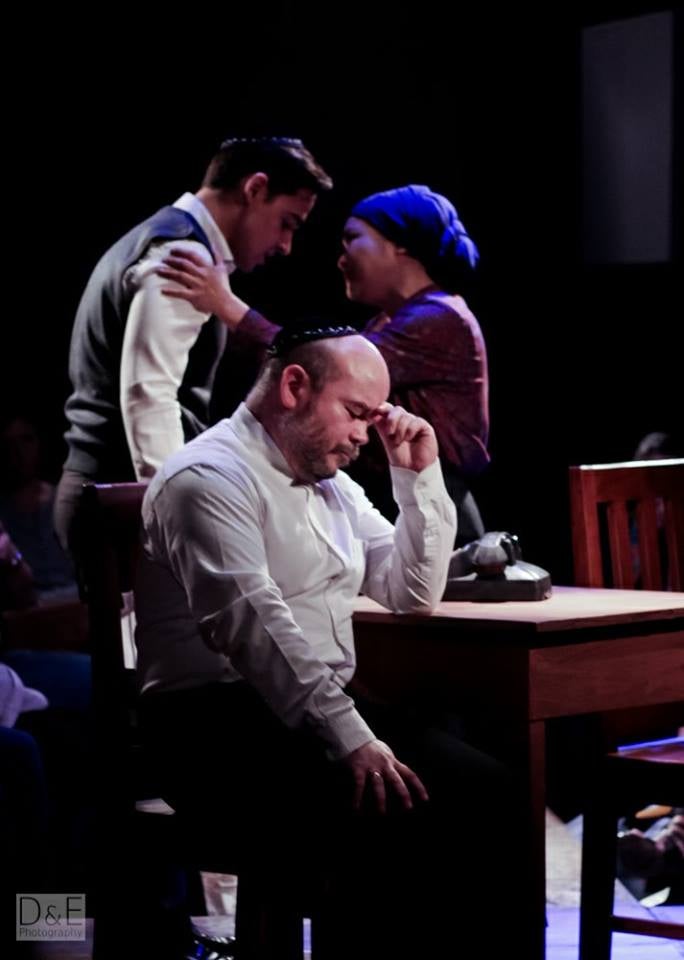 ‘My Name Is Asher Lev’: ‘The demonic and the divine’ in a soul-searching drama

“My Name Is Asher Lev,” Aaron Posner’s theatrical adaptation of Chaim Potok’s novel, is set among devoted Hasidic Jews struggling to maintain their identity in post-World War II New York. The titular character’s soul is the battleground, caught in a painful conflict between religion and tradition on one hand, and his art and individual convictions on the other.

While the production is relentlessly true to its ethnic and sociopolitical roots and historical context, the material is timeless. It speaks of a courageous human being’s quest to pursue the truth as he sees it, regardless of where it brings him and the agonizing price he has to pay.

Intimate theater, which can threaten to break the dividing line between audience and actors, becomes downright razor-sharp voyeuristic in the claustrophobic confines of the PARC Foundation. Virgilio Balanon II’s simple set design places the traditional platform in the middle of the auditorium, with rows of audience chairs literally inches away from the drama.

But director Steven Conde removes all further distractions by keeping the stage almost bare, with just a couple of furniture occasionally brought in as the scene demands. A piercing light streams from the surrounding blanket of darkness to reveal what’s happening on stage.

Ultimately, the intensity of the performances of the three-person ensemble is what grabs the audience’s attention and holds it to the end.

Asher Lev is an artistic prodigy who discovers to his growing dismay that his gifts do not align with the Orthodox Jewish community his parents have established and continue to propagate.

Nelsito Gomez gives a mesmerizing tour-de-force portrayal—from an innocent but stubborn child following his vision to the young adult compelled to break rules that his embattled people have declared sacred and inviolable.

Gomez’s voice changes and adapts to his character’s development, but his soulful eyes convey turbulence and triumph alike—more than the impassioned and eloquent script allows him to say.

Robie Zialcita and Naths Everett play his parents who are leaders in their community, committed to painful sacrifices for the continuity of Jewish existence and the preservation of its cultural identity. Posner’s script and the two actors’ performances avoid stereotypes and make their characters real and sympathetic.

Posner’s excursions into the Jewish fight for their collective identity also elevates the family confrontations from being another coming-of-age story. As Asher himself realizes, his rigid parents are as passionate about their way of life as he is about his art. The many clashes that eventually erupt between them in that tiny space are layered on so many levels that they eventually achieve a monumental scale.

Ideologies, belief systems, and ways of life that have withstood centuries of trial and persecution are measured and tested. As Asher’s iconoclastic Jewish mentor points out to him, art, too, is steeped in generations of history and tradition that can rival their own heritage.

There are other characters that inhabit Asher’s world, and Zialcita and Everett play them with relish and enough of a distinction to set them apart from Asher’s father and mother. These characters hover around Gomez’s protagonist like planets revolving around a newborn sun. Their orbit is tenuous and tense, pulling Asher into different directions.

The resolution, while expected, bathes the characters in a stream of varying emotional colors, tempering the supposed black-and-white issues they are fighting over. Or, as the hero puts it at the end, art and his journey culminate in an intertwining of “the demonic and the divine”—the same experience the audience goes through in 90 minutes of this soul-searching drama on that forlorn stage. —CONTRIBUTED