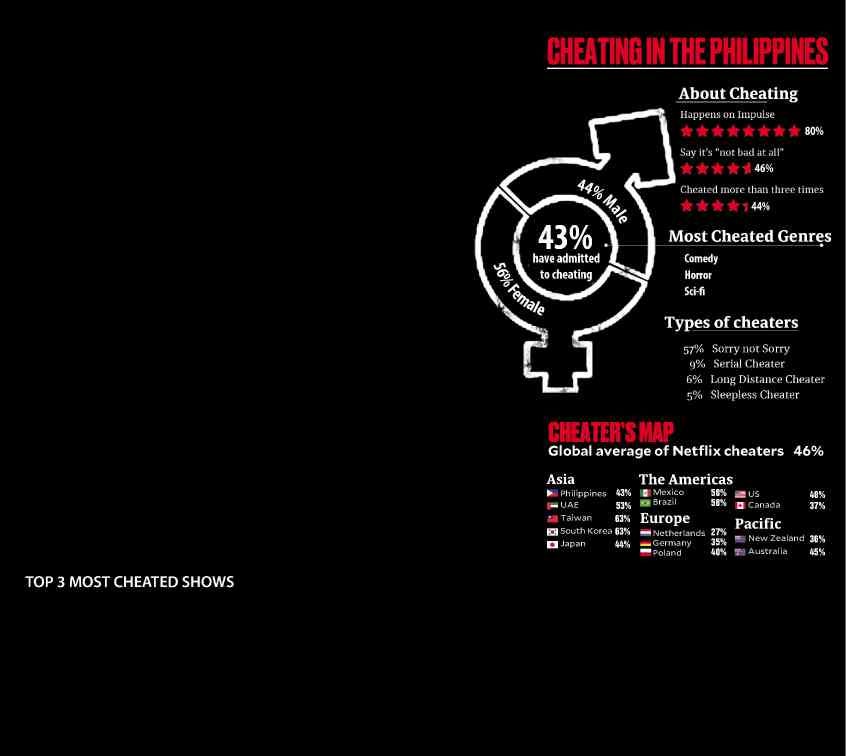 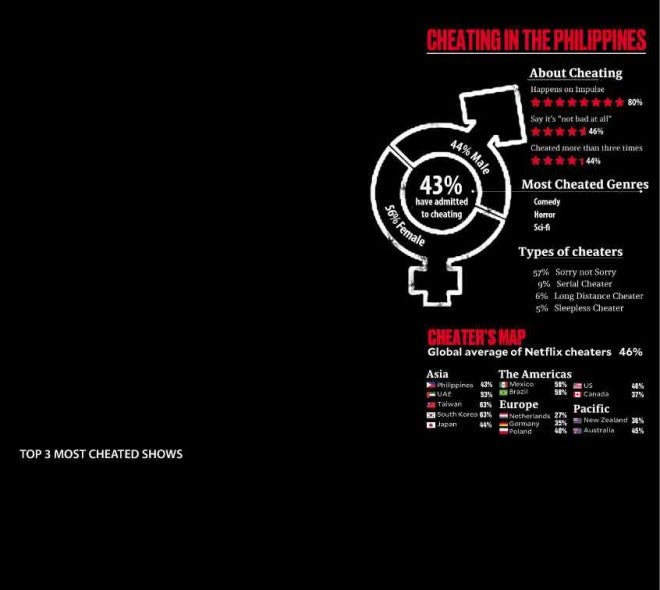 Check the phone, but be wary of hesitation. Scan the browsing history; keep your eyes peeled for any suspicious moves. They can be mindful with their words, but sometimes, the lips giveaway. There is no perfect crime as there is no perfect relationship.

Sleep with one eye open. Don’t start a confrontation until you’re absolutely sure, or when you have caught them red-handed.

Everyone cheats, even the people you least expect-that doe-eyed, innocent looking beau could be as guilty as the boy-next-door.

In fact, 4 out of 10 Filipinos have admitted to “Netflix cheating” on their partners. Yes, watching a show ahead of your partner when you both have pledged to binge watch together is a thing, and it’s prevalent.

Starting a series with that special someone is a commitment-what happens when the inevitable break up comes? You might hate that show forever-it’s sacred couple alone time.

But the temptation of “just one more episode” is always there, even when the beau is missing in action. Fifty percent of Filipino cheaters said they would cheat if they could get away with it, according to a study conducted by Netflix.

The survey, based on 30, 267 subscribers across the globe, showed that 46 percent are guilty of Netflix cheating. Asian subscribers rank among the highest number of cheaters in the world. In Hong Kong, 59 percent have admitted to stream cheating, followed by India with 46 percent, which is the same with the global average.

The highest numbers of loyal couple streamers reside in The Netherlands (73 percent) and Germany (65 percent).

Our colleague, Katy, is a self-confessed cheater. On a “House of Cards” marathon with her husband, in the middle of a climatic episode involving a “tricycle” between Frank and Claire Underwood and Edward Meechum, Katy glanced over her husband, who was already fast asleep.

She went on and finished the episode (Who can blame her? Kevin Spacey. Tricycle. Nathan Darrow.)

Katy’s husband found out about the infidelity when they re-watched the episode. Her excitement gave it away. She did not feel any remorse, though.

According to the survey, 25 percent of cheating happens when the partner falls asleep. “Sleep cheating,” however, is the “Friends” equivalent of “we were on a break.” Like that time Ross slept with another woman while his relationship with Rachel hit a bump in the road, cheaters argue that sleep cheating does not count.

The Sleep cheater is among the four types of Netflix-cheating partners. There’s also the Long Distance Cheater, who binge-watches when the partner is out of town. (Distance tries love very often).

The Sorry Not Sorry Cheaters, meanwhile, do not feel guilty about cheating at all. These lovers do not feel a prick of conscience, and five out of ten would cheat more often if they could get away with it.

The worst in the pack, and the most common kind of cheater (40 percent), is the Serial Cheater. They have cheated over four times, and 5 percent confessed they have done so by hiding in another room to stream that episode.

The million-dollar question, however, is how do you stop the sneaking?

We do not know either. We have countless sleepless nights because the temptation is real, and our 3 A.M. mantra is “just one more episode.”

And like the 32 percent of the respondents who ruled Netflix cheating socially acceptable, we choose this type of infidelity every day.