On its golden year, Peta says ‘thank you’ with a two-night concert | Lifestyle.INQ ❮ ❯ 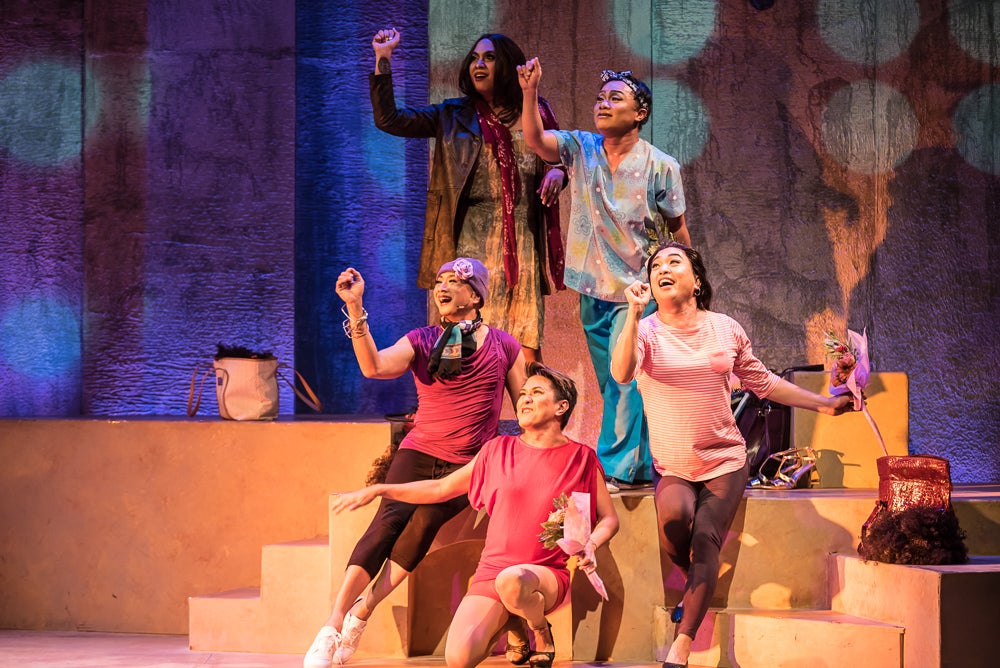 “Care Divas,” 2010. A song from this hit musical is included in Peta’s 50th-year commemorative album “Sa Hirap at Ginhawa.”--ALL PHOTOS FROM PETA

On its golden year, Peta says ‘thank you’ with a two-night concert

Like coming from a vortex” is how Maribel Legarda, artistic director of the 50-year-old Philippine Educational Theater Association, describes the country’s current socio-political situation, with its eerie echoes of a more tumultuous time.

Legarda joined Peta in the late 1970s as a college freshman. From the martial law era to the assassination of Ninoy Aquino in 1983 and the eventual overthrow of the dictatorship, she and the pioneering theater group she now heads have been both a living witness and an active participant in the nation’s history.

But so much so with struggle for now. Peta has only happy thoughts these days in the run-up to a big part of its 50th-year celebration—a two-night, two-hour concert on April 7 (the day Peta was founded in 1967 by Cecile Guidote-Alvarez) and April 8 at the Peta Theater Center.

Dubbed “Singkuwenta: The Peta 50th-Year Anniversary Concert,” the show is “purely invitational… because it’s our way of saying thank you to our partners, friends, alumni and so on. It’s free, but we’re paying the artists naman,” says Legarda.

And it has to be two nights to accommodate all those invited; there is no plan for an extension.

“Singkuwenta” is also meant to launch the 13-track “Sa Hirap at Ginhawa,” Peta’s 50th-year commemorative album. It has five suites and eight singles, all of which will be performed in the concert. “Plus additional four to five numbers or more, we’ll see,” says Legarda, of the performances all meant to celebrate highlights and milestones in Peta’s rich theater legacy.

The album “Sa Hirap at Ginhawa” is a prized collector’s item for lovers of original Filipino musical theater. It was made available in November last year at the Peta Theater Center, and is now on Spotify.

The title track, “Sa Hirap at Ginhawa” is a wedding song from 1980’s “Canuplin,” a play about Canuto Francia, regarded as the Charlie Chaplin of the Philippines during the bodabil era. The album interpreters, Aicelle Santos and Noel Cabangon, are confirmed to perform in the concert.

Other songs from the album to be performed are “Pagsapit ng Dilim,” a kundiman duet from a 1990 production of Aurelio Tolentino’s “Kahapon, Ngayon at Bukas”; “Paghahanap Ni Oryang” from the 1995 historical musical “1896”; “Laman ng Isip” from 2011’s “Rated: PG”; and “Padayon,” from a play of the same title in 2014 that tackled the plight of Supertyphoon “Haiyan” survivors.

The five suites in the album are classified “Good Vibes,” “Sectoral,” “Ethnic,” “Kundiman” and “Makabayan.”

Peta stalwart Rody Vera sings in this suite, and is also confirmed to perform in the concert.

Finally, the “Kundiman” suite has “Tapunan ng Lingap” from 1982’s “Pilipinas Circa 1907” and “Kalayaan” from 1990’s “Kahapon, Ngayon at Bukas.” It also has “Sa Loob at Labas” (lyrics by Francisco Balagtas and music by Lutgardo Labad) from 1971’s “Halimaw.” Celeste Legaspi, who sang in the album, has confirmed her attendance in one of the two shows.

Besides Cabangon, Santos, Vera and Legaspi, the UP Singing Ambassadors and the Kilyawan Boys Choir are also confirmed performers.

“As for the additional four to five songs, we have to keep them secret,” says Legarda. Then she adds, “Oh well, there’s one from ‘Rak of Aegis.’ Pero ang dami pa rin naming hindi nagawa, naisama!”

“Singkuwenta” is directed by Melvin Lee, with script by Anj Heruela.

Since there are no tickets to be sold, lucky musical theater lovers would just have to wait for that SMS, e-mail or snail-mail invite. The struggle continues.  —CONTRIBUTED