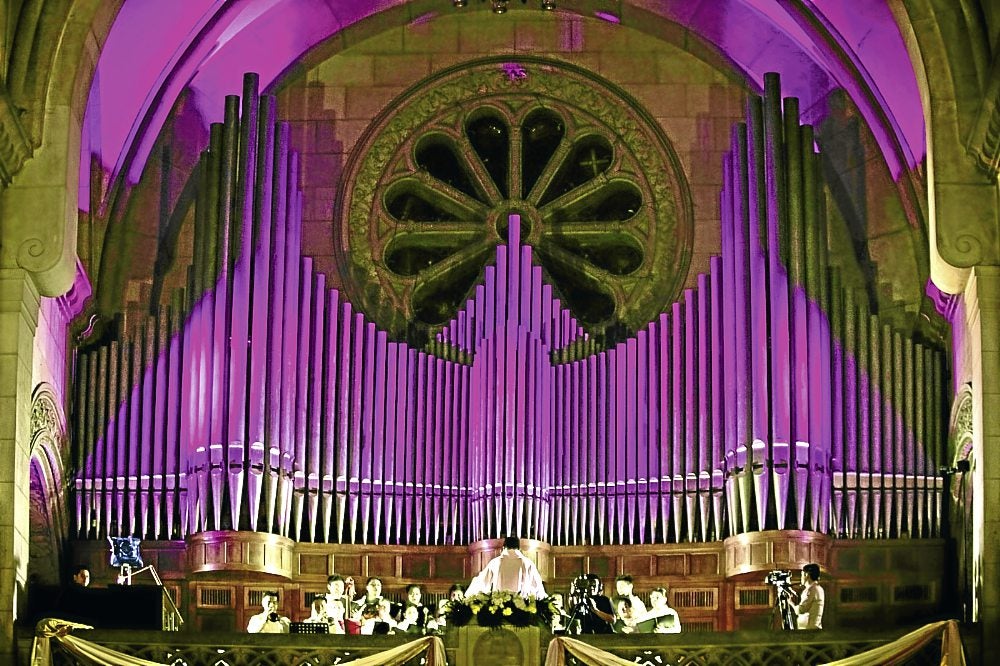 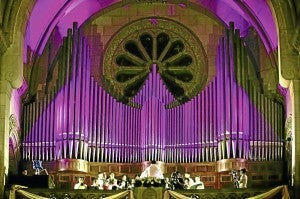 “This time, we’re trying to go back again in the old ways of composing liturgical music, that is, using ‘approved texts’ like psalms and proper antiphons,” said cathedral music minister Ferdinand Bautista, the composer of the new wedding songs.

Powerful melody from the pipe organ, accompanied by the changing colors of lights on the ceilings and posts of the cathedral, set the mood for the event. The pipe organ showcased its 53-year-old sound along with trumpet, violins, contrabass and timpani on selected performances on the first part of the event.

Lights on the cathedral’s posts and ceilings then changed to happy yellow from the calm violet, green and blue as the event moved to its second part, featuring both classical and modern liturgical music. 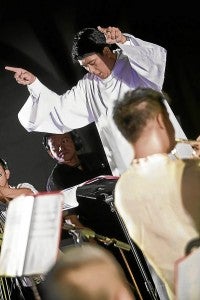 The altar became a visual gallery as students from schools in Intramuros offered flowers to the Virgin Mary and performed ballet.

It started to become livelier when bright lights in front of the altar opened for the wedding simulation, participated by guests, Manila Cathedral parishioners, and students from Colegio de San Juan de Letran and Colegio de Sta. Rosa.

“Ang Ngalan Mo, Poon” is a wedding march. The strong rhythm from all the instruments  gave it a very powerful feel, perfect for a wedding held in a mammoth place like the Manila Cathedral.

Definitely, the wedding is not complete without the “Kiss the Bride” part, but since it was just a wedding simulation and the participants were merely actors, the groom only kissed the bride on her cheek.

Bautista said the new wedding songs follow the initiative of Msgr. Nestor Cerbo, rector of the Cathedral, to make the cathedral a showcase of liturgical music for the whole archdiocese.

Bautista added that it took him around two months to compose the new catholic wedding songs, and he had to consider the pipe organ and the other instruments in arranging the music.

“These songs are still in the experimental stage because there are still few who compose in this particular field,” he said.

“Maybe we should start on it little by little until we return to the right way of composing liturgical songs.” “I hope more young people would get involved in liturgical music the right way. They have to get into the conservatory first, enroll in a formal music study, and then study the liturgy to balance [their knowledge].”

After the wedding simulation, José Mari Chan, the event’s featured performer, sang his hit records “Christmas in Our Hearts” and “A Wish on Christmas Night.” He said it was his first time to sing at the Manila Cathedral. 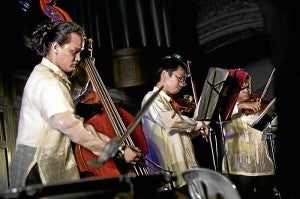 “Singing in front of a church crowd is different, especially if you’re singing Christian songs,” he said. “It is more meaningful inside the church because you’re glorifying God by way of your songs.”

Capping the night’s performance was “A Christmas Story,” another new composition of Bautista with Jennifer Wallum, an Anglican.

Cerbo said proceeds of the concert would go to the maintenance of the pipe organ; pipe-organ student training and choir training; and the social services of the cathedral.

This year’s Pipe Organ Festival also marked the 30th anniversary of the Manila Cathedral as a basilica minore, and was a tribute to Cardinal-Archbishop Gaudencio Rosales, who has retired, and incoming Archbishop Luis Antonio Tagle.