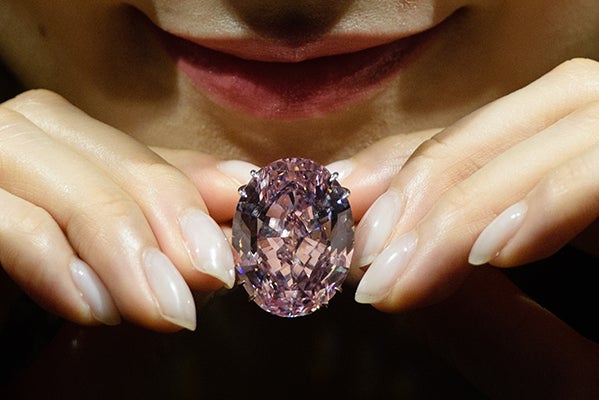 A plum-sized pink diamond is expected to break the world record for a gemstone early next month, when it goes under the hammer in Hong Kong, Sotheby’s auction house said Wednesday.

The 59.60-carat “Pink Star” is the largest in its class ever graded by the Gemological Institute of America (GIA). But Sotheby’s was been forced to buy back the flawless diamond after a previous buyer defaulted on what was then a record sale in 2013.

That sale in Geneva saw a New York-based diamond cutter secure the stone for $83 million.

Sotheby’s is confident the “Pink Star” will again sell for a record price on April 4, somewhere above $60 million.

“I think when it’s sold, it will be the new world record price anywhere in the world for a jewel at auction, and I think that’s quite remarkable,” its deputy chairman for Asia Quek Chin Yeow told AFP Wednesday.

Quek said Hong Kong is the right place for the sale, with Asian buyers breaking records in other categories for diamond sales in the past few years.

Quek said there was still much interest in the “Pink Star” since the abortive sale in 2013.

“Four years is a good time period since the last time it sold in Geneva… there are a lot of new billionaires on the market,” Quek added.

The Pink Star was discovered in a mine in Africa by De Beers in 1999. JB