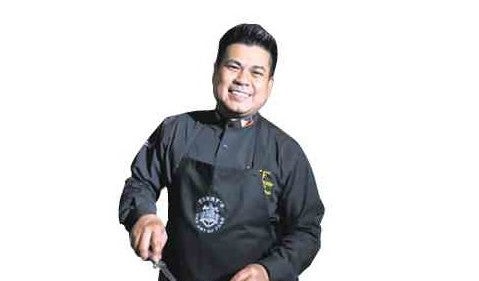 The swing of the elbow, the sawing motion, the seamless moves—like a virtuoso violinist, Lopez employs all these techniques in the art of carving ham. And like a priceless violin, the ham he carves is of the finest quality.

Lopez is in Manila this week to participate in the third Madrid Fusión Manila at the SMX Convention Center April 6-8.

Based in Madrid, he was the first Filipino back in 2000 to become maestro cortador, or master carver of Iberico ham (his brother Mark was the second).

It was a skill he didn’t even know he had, but which became quickly apparent at the Cinco Jotas restaurant where he was working as a waiter.

“They saw I had potential, that may kamay ako (I had the hands),” he recalls.

The restaurant’s master carver trained him to be second in command.

“I would take over on his days-off,” Lopez recalls. Soon, he became so good at the job that he was assigned to a Cinco Jotas restaurant where he became the master carver himself.

The title is something he can surely be proud of. Cinco Jotas ham is made from an ancient breed of pigs that roam freely in Spain’s ecologically balanced Dehesa region. The pigs feed only on the acorns that fall from the oak and cork trees and, while already being huge, have to reach a certain weight before they are deemed worthy to be turned into ham.

The legs of ham are cured and left to hang in the stillness of a barn perfumed by the sweet mountain air. The curing period can take as long as five years.

Cinco Jotas ham is prized by connoisseurs everywhere. As master carver, Lopez gets to travel to wherever the hams are ordered, from the Netherlands and Germany to parts of South America and the US.

There he carves paper-thin slices of the exquisite ham that has a well-marbled texture and a complex, nutty flavor that’s salty, sweet and savory all at the same time.

Because Cinco Jotas is the official ham of the UEFA Champions League, Lopez also has the unique privilege of carving ham for Europe’s famous football players and their guests. In between carving ham, he is able to watch their games, too.

With knives being an integral part of his job, Lopez always makes sure to bring his own. He uses only Arcos knives, a top Spanish brand manufactured in the Albacete region. A good ham holder, he says, is also vital to successful carving.

“You should be able to screw the ham to it so that it’s stable,” he says. He thinks the best ones are made from pressed wood fiber because it doesn’t absorb oil.

Perhaps one secret to Lopez’s success is that he just loves what he does. “When I carve the ham, I feel it,” he says.

This feeling seems to transmit to people who love watching him, whether he’s doing a demonstration at El Corte Ingles (Spain’s premier chain of department stores) or carving ham for the rich and famous in a private party. “Da gusto verte cortar,” they tell him.

The fact that he’s a Filipino who looks Chinese even adds to his appeal. “People would often wonder who is this Chinese guy teaching us how to carve Spanish ham,” Lopez says. Their skepticism turns to awe once he speaks perfect Spanish and starts carving the ham.

While he has enjoyed the numerous travels that come with his job, Lopez has never forgotten his Filipino roots.

“The first time I started carving Jamon Iberico, I would wish that Filipinos would also be able to experience this exquisite flavor,” he says.

Being able to carve ham in this week’s Madrid Fusión Manila is thus, for him, like a dream come true.