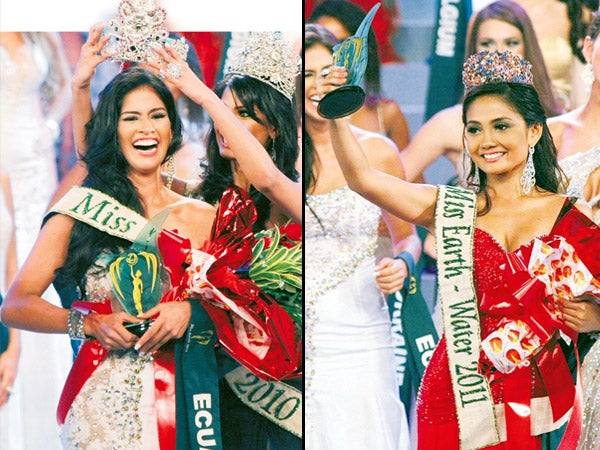 Put another star in the UP sky.

Athena Imperial, another graduate of the University of the Philippines (UP), on Saturday night won the Miss Earth-Water title at the 2011 Miss Earth pageant held at UP Theater in Diliman, Quezon City.

Imperial, a communication research major, is among UP beauty queens who brought honor to the country in international competitions this year.

Pageant host Sonia Couling said the “elemental titles” Air, Water and Fire were of equal importance and thus had the same ranking.

One of the shortest candidates in this year’s pageant at 168 centimeters, Imperial soared at every stage of the competition, edging out leggier, more curvaceous candidates.

This year, the pageant introduced the “Miss Earth Declaration,” a manifesto in which the candidates pledged support for a common environmental mission to be implemented in their respective countries.

The 84 candidates focused on education as an important tool in the battle to save the environment. This was also the theme of the final question given to the top 4 finishers during the final round of the competition.

Alava said “education is the base for everything” and appealed for a campaign to teach the children, who she said would manage Mother Earth for future generations.

She took home a $20,000 management contract with pageant organizer Carousel Productions and will have the Oakwood Premier at Joy-Nostalg Centre in Ortigas, Pasig, as her official home in the Philippines whenever she comes to the country. She also won a slew of prizes from pageant sponsors.

In an emotional interview with the Inquirer, Imperial said: “I’m happy for the Filipinos. I shot for the moon and landed among the stars. Oh my God!”

Imperial confessed that she was saying the rosary whenever she appeared on stage. “While I was smiling, I was praying at the same time. And that gave me confidence, together with the cheers and the applause of all the people in UP Theater.”

She offered her victory to all Filipinos. “This is not only for me, this is for every Filipino,” she said, adding in Filipino: “Let us continue dreaming because we can reach our dreams as long as we have faith in God.”

Imperial praised her fellow candidates: “We are all beautiful. Actually, the choreographer said she had an easy time with us because we quickly picked up the steps. Also, we were very much aware of each others’ environmental advocacies. We know what kind of beauty each one of us possesses.”

Alava said “all of us deserve to win.” She invited her fellow candidates to help her in her mission for the environment. “We are all here for a purpose and we have to continue working for it,” she said.

The Ecuadorian beauty sees her crown as “a tool to help save Mother Earth.”

The pageant was supposed to be held in Bangkok, but the devastating floods that inundated the country in October forced Carousel to move it back to its birth place—the Philippines.

Carousel president Ramon Monzon said: “It would have been insensitive, even irresponsible, to go ahead with the event in Bangkok at this time.”

In a statement, the organization said: “With the natural calamities that have befallen Thailand, Turkey and other parts of the world, more than ever this is the best time to stage Miss Earth to call attention to pressing environmental problems.”