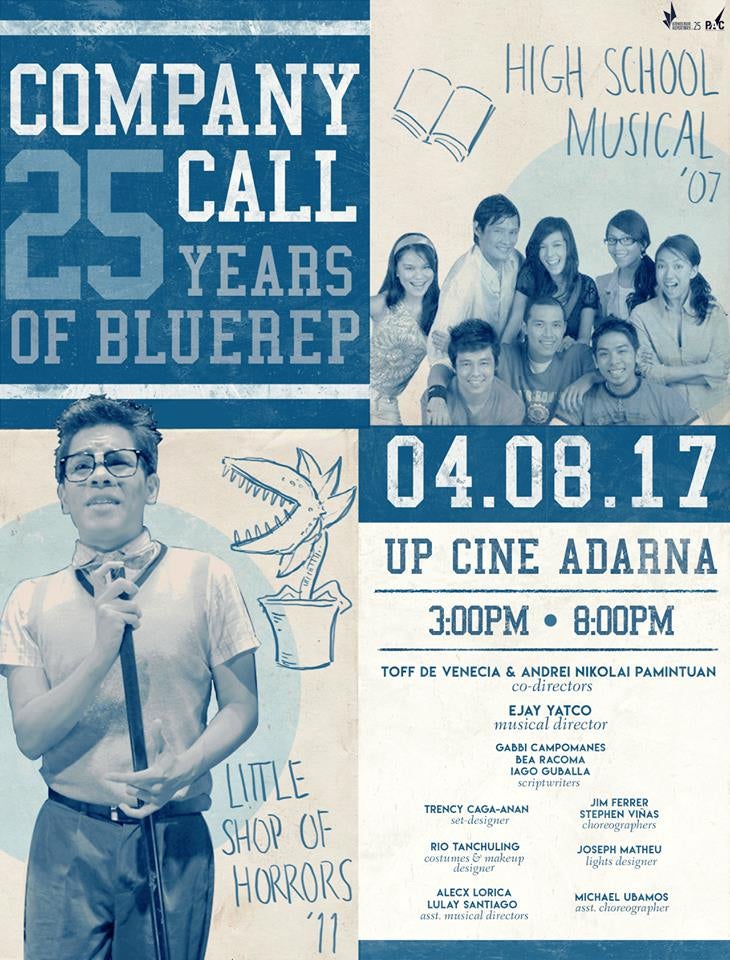 A theater group with a heart” is how alumnus Ejay Yatco describes Ateneo Blue Repertory or BlueRep; the campus theater group is celebrating its silver anniversary with a concert titled “Company Call: 25 years of  BlueRep,” today (April 8), 3 p.m. and 8 p.m., at Cine Adarna in University of the Philippines Diliman.

Also part of its silver year is the staging of Carlo Vergara’s “Kung Paano Ako Naging Leading Lady” on April 19-30 at the Ateneo’s Rizal Mini Theater.

BlueRep “is where we learned passion for our craft. It’s a good training ground. Every year, alumni get to be part of established groups like Repertory Philippines and the Philippine Educational Theater Association,” Yatco says.

Over the years, BlueRep has produced a trove of young talents who have gone on to become well-regarded professional players in the local theater and music scenes. Besides the three mentioned, there are Reb Atadero, Mako Alonso, Abi Sulit, Charissa Pammit, Jill Peña, Kayla Rivera, Gerard Salonga and Kakki Teodoro. Veteran actor-director Rem Zamora is among the  pioneer alumni.

A few “Reppers” have started their own theater groups, or have helped in encouraging the creations of original, out-of-the-box productions.

De Venecia, now a lawmaker, is founding officer of The Sandbox Collective, 9 Works Theatrical and head organizer of The Imaginarium, a multi-arts festival. Zamora is founding officer-actor-producer of Red Turnip. Pamintuan is behind the now-annual Fringe Manila festival. Yatco, from his college years, has been composing original musicals, among them “Toilet The Musical,” “Fairy,” “Friction: A New Musical,” “Bulong ni Rara” and “Real-life Fairytales.”

Zamora recalls BlueRep’s inaugural season in 1991: “It was a very different BlueRep back then. We were a small group. We did everything ourselves! We designed and created the sets, made our props, even made the housing for the lights,” he says.

Zamora played Leading Player in “Pippin,” the first production held at Rizal Mini Theater. There were 25 members, including the cast of 15. On its second year, the company did “The Wiz” with Liza Infante and Lisa Romero. “Pippin” was a hit, so BlueRep reran it in 1995 at the Insular Life Theater.

De Venecia was part of BlueRep from 2006 to 2008, starting out as an actor for “Hope for the Flowers,” “High School Musical” and “Batboy.”  When he was asked to be assistant director for “The 25th Annual Putnam County Spelling Bee,” it launched a new creative front for him; he would eventually direct “A Little Shop of Horrors,” “13 The Musical” and “A New Brain” for the group, even after he had graduated from Ateneo.

“Blue Rep was so instrumental in helping me develop my passion and love for the stage. It allowed me to find my voice as a young director—gravitating toward the metaphysical and the absurd, and the balls to the wall, collaborative spirit that comes with working with young, newfound talent. I will forever be grateful to the org,” he says.

Pamintuan was a Communications Technology Management Major during his freshman year, but he fell in love with performing and storytelling so he shifted to theater arts. He acted in “Batboy,” “Footloose,” “Merrily We Roll Along” and “Sweet Charity” before he became assistant director to Chari Arespacochaga in “High School Musical.”

For “Company Call,” Pamintuan estimates that about 30 songs from more than 25 productions will be performed, starting from “Pippin” to “In the Heights” (2015).

On the other hand, Bea Racoma, a senior student and BlueRep’s company manager, said the choice to stage “Kung Paano Ako Naging Leading Lady” is for the group to finally venture out and not limit itself to Western or English-language plays.

“As what Andrei said, marami pa ring conyo dito and we won’t deny that,” she quips. “Because ‘Leading Lady’ is Taglish, the stereotype of BlueReppers as the [English-spouting] Fuerza Filipinas is the kind we want to explore—a good entry point for us to begin that journey into doing more Filipino language musicals.”