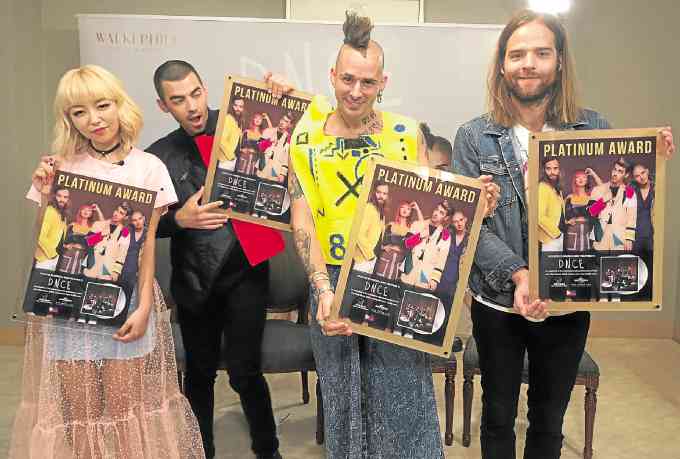 A Super date with DNCE

What do you get when you spend 10 minutes with DNCE? Spontaneous singing, weird noises, a bit of horseplay, and lots of laughter.

But first, who is DNCE? Frontman Joe Jonas has a ready answer, “Take superheroes, funk, cake, some hygiene products like toothbrushes, and a little bit of sparkles and magic dust, blend it in a blender, preferably with bourbon, and pour it into a nice tall glass with a little umbrella and pineapple. That’s us,” he said during Super’s interview with the awesome foursome before their first concert in Seoul, South Korea.
MCA Music recently flew Super to Seoul to cover DNCE’s first-ever Asian tour. We joined the band members for a traditional Korean morning meal at the Grand Walkerhill Seoul before the interview.

How they introduce themselves as individual members is no less offbeat. “Hmmm… I would say Joe is the fearless international super spy,” Cole began. “JinJoo (Lee, guitarist) is the dangerous, beautiful princess of bad attitudes–”

“Jack (Lawless, drummer) is a big, adorable cat who gets paid to have a full-time job to chill out,” Cole continued.

“And Cole is a disco-funky psychedelic dog who is also a Harajuku girl and a stepdad in one,” added Joe.

It’s barely been a couple of years since DNCE burst into the scene, but the concept was probably floating around in Joe’s mind before then. When we’d first met him 5 years ago, the middle JoBro had just embarked on a solo career. The Jonas Brothers finally decided to go their separate ways soon after, leaving Joe to pursue his own musical projects, including starting a new band.

“I always thought about it, and I had a dream—like a vision of what it may be. This is exceeding my expectations,” Joe said.

“Jack and I have always talked about it together. We lived together for a couple of years and we always spoke about that one day we should do something relevant, try something new [but] just being patient, kind of. It worked out. ’Cause if we rushed it, it wouldn’t be what it is now today,” he added.

A longtime friend and JoBros collaborator, JinJoo was brought into the fold, with Cole rounding up the four-man team after his previous band, Semi Precious Weapons, disbanded.

Then, a drunken text gave rise to the band’s name. “One night, we were kinda drunk and tired from having too much fun all day. We were writing, and someone misspelled the word ‘dance.’ And that’s how we became [DNCE],” said Cole.

Shortly after forming, DNCE met commercial success with the 4-track EP “Swaay,” which spawned the earworm singles “Cake By The Ocean” and “Toothbrush.”

“Cake” received heavy radio airplay, generated millions of streams on Spotify and climbed to the Top 10 ranks of Billboard’s Hot 100 and iTunes’ pop charts, thus cementing DNCE’s status as a band to watch out for.

“Cake” received heavy radio airplay and climbed international charts, cementing DNCE’s status as a band to watch out for.

Interestingly, the music video for “Toothbrush” got extra traction not just because of the song or the sizzling onscreen chemistry between its leads, but also because people lauded the band’s choice of a leading lady: plus-size model Ashley Graham.

“We’re just thrilled that she said yes to be in our video. We’re fans of her work,” said Joe. “She has such an amazing voice, and she does so much stuff. She’s an activist, which is really great. So for us to be able to have her in our video was an honor.

“You know, it was a surprise how much people spoke about it, but I think it is probably something that was good for people to be speaking about,” he mused. “Because for us, she’s a beautiful woman, and that’s what really matters. And she’s a great person. So that’s why I think there shouldn’t be a stereotype of what you should have in music videos, ever.”

Following the glowing reception for “Swaay” and their much-deserved win as “Best New Artist” at last year’s MTV Video Music Awards, the foursome put out their highly anticipated full-length album last November. Released locally under the MCA Music label, their eponymous album had achieved platinum status in the Philippines for outstanding record sales. The album includes cuts from the EP and pits “Body Moves” as the carrier single.

Having mentioned in an earlier interview that she was “jealous” of Joe for getting to make out with a model for the “Toothbrush” video, JinJoo finally got her fair share of steamy moments in “Body Moves,” as did the rest of the members.

“Do you think you’d be doing it again or is one video enough?” We teased. “Uh, never enough?” The blond “Guitar Girl” replied with a grin, and the band bursts into wild applause. “Well said!” cheered Joe.

But seriously, how does it feel to be the only girl in the band – this band?

“It feels amazing, having this,” said JinJoo earnestly, who had moved to the US on her own 10 years ago to pursue music. “These are my brothers—can be my best friends, can be my bodyguards. They’re awesome, so I feel lucky.”

She’s come a long way—literally and figuratively—and we’re happy for her.

For a “young” band, DNCE has had a pretty action-packed 2016, what with headlining their own tour and joining Selena Gomez on hers. By the looks of it, 2017 has a lot more in store for the band and its followers from all over the world; hopefully, these plans will soon take the foursome to our sunny shores. When told about DNCE’s growing fanbase in the Philippines and how they’re rooting for the band to visit Manila soon, JinJoo smiled and said, “Salamat!”

“We’re gonna be working on lots more music and hopefully a big tour—– gonna play in the Philippines, meet the fans, and then come back here and play more shows so I trust we can make this work,” said Cole.

Joe, for his part, had nothing but good memories from his previous trips to the Philippines to share with his bandmates. “Fans are so supportive and so passionate,” he recalled. “I’ve had really good traditional food when I was there, and I partied a lot. And they took me out on a crazy, wild, fun night that I’ll never forget.”

Maybe he can act as the band’s tour guide for Manila, then?

“Yeah, teach me how to party,” Cole said, turning to Joe with a puppy-dog look while the others laughed.

No need for that, Cole—you guys are doing just fine.

“DNCE” album is available at Astroplus and Astrovision; download and stream it on on Spinnr.ph, iTunes, Apple Music and Spotify; or buy it on http://link.to/DNCEPDI.