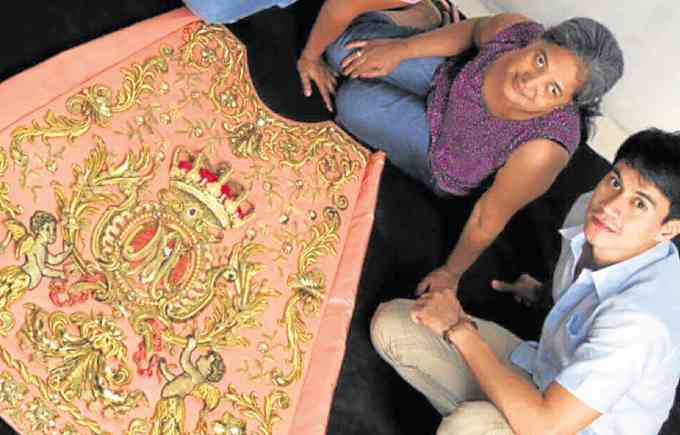 Arnold Reyes’ passion outside of acting? Dressing up santos

Theater, television and indie film actor Arnold Reyes wanted to become a priest when he was young. He didn’t become one, but it has led him into a unique endeavor informed by his religious faith—making vestments for santos.

Reyes’ passion began in childhood, when as a youngster he would peek at a narrow opening behind the statue of Virgen La Purisima in Concepcion, Malabon, where devotees can touch the image. He wanted to figure out how the Virgin’s magnificent vestments were put together.

Reyes also belongs to a religious family. Annual processions were a big thing. His paternal grandmother, unable to walk, would ask the stronger family members to carry her to church to attend mass.

When his father decided to move the brood to Novaliches, Reyes became a devotee of the community’s block rosary dedicated to Our Lady of Antipolo.

His mother, Africa Reyes, was supportive of her son’s religious fervor. Years later, Mrs. Reyes fell ill to diabetes, underwent dialysis and eventually needed a new kidney. Everything was fine until her body rejected the replacement 10 years later.

By then, her son was nearly finished with his mass communication course but was forced to stop to help with his mother’s medicines and other needs.

Reyes remembers his mother urging him to continue his devotion to the Blessed Mother despite her condition. “Humaba ang buhay ko dahil sa faith mo kay Mama Mary,” she stressed.

Reyes’ foray into religious vestments started at about this time, beginning with an innocent visit to a religious shop in Makati City. He made friends with the proprietor while admiring the goods. The owner later asked whether Reyes knew someone who could sew vestments.

“Ako po,” the young man volunteered. Reyes asked for paper, pen and ruler and began measuring a Marian image’s dimensions on the spot. What he did not tell the proprietor was that he had no clue how to put a vestment together.

Reyes later got help from Zeny Mataya, a classmate’s embroiderer mother and her sister Chi Base. The three sewed together a vestment that passed muster. New clients came soon after, but Reyes said he did not realize the potential of creating new garments for santos until a visit to Paris, where he marveled at the architecture and thought of translating the three-dimensional designs of buildings to clothes worn by santos.

A timely inquiry by renowned ecclesiastical designer Rafael del Casal put things in motion. The designer asked Reyes to execute a design for a vestment that would be displayed in Sto. Domingo Church.

“Rafael’s designs were exciting to interpret. I wanted to apply what I learned and observed (in Paris), in books and antique pieces. That was our first successful partnership,” he recalls.

Later on, a big-ticket order came. Reyes was asked to construct new vestments for Our Lady of La Naval right after dressing a Sto. Niño de Pandacan that was sent to the Vatican. At the same time, he and his team of bordadoras had just transferred to a new shop whose rent he still worried about.

La Naval’s vestment took nine months to finish. There were times when Reyes would run out of materials (Reyes’ shop, Bordados de Manila, uses mostly imported and expensive gold-dipped threads and other accessories), or one of the bordadoras would have financial issues.

Reyes said he would call on the Blessed Mother for help. There were moments when Reyes (who currently plays a character in the teleserye “Wildflower”) would get a call for a project and get paid immediately after a shoot, so “may pang-suweldo, pambili ng (sewing materials na) kulang.”

One time when he and the bordadoras were struggling with La Naval’s garment, the scent of roses suddenly filled the workshop.

The Blessed Mother also made her presence felt during another project, when Bordados de Manila accepted an order for vestments for Our Lady of Manaoag in Pangasinan.

Reyes recalls a typhoon submerged Metro Manila then. The order was due at 6 p.m., and the ladies were still sewing pieces together at 11 a.m. Some opted not to work, thinking the typhoon would not make travel to Pangasinan possible anyway.

Reyes’ workshop supports not only the bordadoras but also their dependents. Before completing the vestments for La Naval and the Señora de Manaoag, Reyes and his team wrote down little prayers asking for Our Lady’s help and sewed these into the vestments.

Reyes confesses he would sometimes cry silently when a vestment is finished because his mother, now gone, is no longer around to see his work.

“There are moments when, after we finish a vestment, I would offer a silent prayer to the Blessed Mother. ‘Bahala ka na sa mommy ko.’ I would not be this organized, this ‘OC’ with your vestments, if I didn’t take after my mom,” Reyes adds.