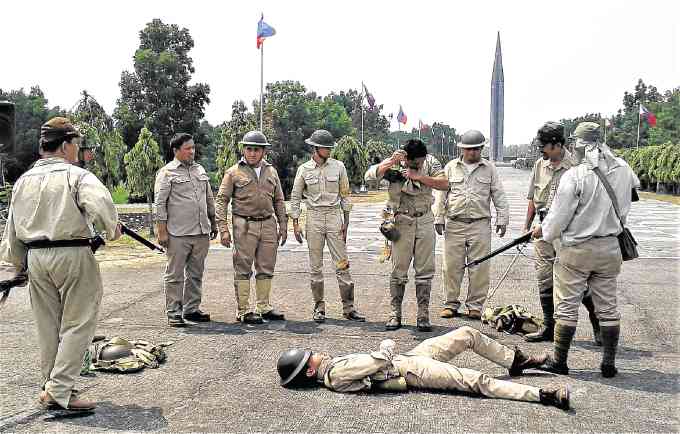 The fighting in Bataan in April 1942 brought traumatic memories to National Artist for Literature Lazaro Francisco (1898-1980), whose biography (first draft only) I have written at the request of the family.

Killed on the frontlines were his eldest son, Lazaro Jr., 19, and his youngest brother, David, 27, believed to have died in the Bataan Death March.

From this bitter experience came one of Francisco’s greatest novels, “Sugat ng Alaala” (Ateneo University Press, 1995), inspired by the tragedy that befell the family, as with many other Filipino families

Then there was the then Lt. (later Major) Joe Rogers, devoted husband of the distinguished actress-director Naty Crame Rogers, another major artist whose biography I have had the honor of writing.

His father had been an officer during the Philippine- American War, learned Tagalog, married a Batangas beauty, and had many children with her, among them Joe.

Like his father, Joe Rogers became a military man and served in Bataan. He participated in the Death March from Mariveles, Bataan, to San Fernando, Pampanga, and then finally to the infamous concentration camp in Capas, Tarlac.

Along the way he witnessed the brutalities inflicted upon his comrades by the Japanese soldiers. By dint of will, he survived, and he lived until the age of 87.

And so every year, at this time, there are appropriate ceremonies on Mt. Samat, Bataan, and Capas, Tarlac (and on Corregidor in May), to commemorate the sufferings and valor of the Filipino and American forces who fought and died in that conflict.

There was a Freedom Trail of 160 kilometers from Mariveles to Capas that ended at the town’s National Shrine, with its towering obelisk.

The activities were presented by Automobile Association of the Philippines and the Tourism Promotion Board of the Department of Tourism.

There was a Freedom Run which started in Mariveles; a bike run (“Padyak para sa Kagitingan”); and, within Capas, a Freedom March.

Guest of honor during the closing ceremonies at the National Shrine was former President Fidel V. Ramos.

An American speaker, Col. Ralph Liebhaber, noted that while the “numerically superior forces” of the British Empire surrendered to the Japanese, the Filipino forces continued to fight tenaciously, to the surprise of the Japanese, until the fall of Bataan in April and Corregidor in May.

One of the highlights of the program was the recreation of the hardships endured in the Death March by youthful members of the Philippine Living Society, clad in Filipino and Japanese military uniforms.

That was a good move. Let not the youth forget the sufferings of their grandparents in the holocaust that was World War II in Asia and the Pacific. —CONTRIBUTED