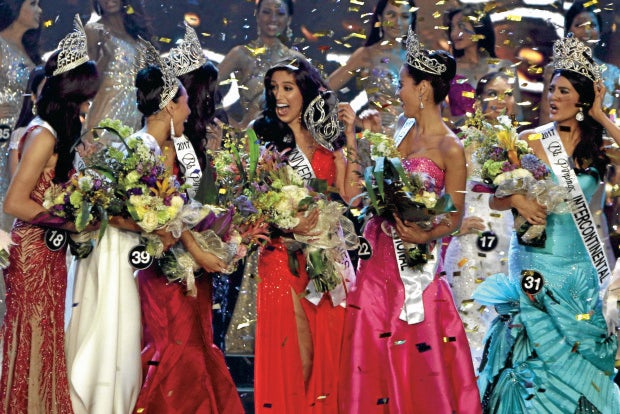 For British-Filipino Rachel Peters’ family, her proclamation as Miss Universe Philippines was both surprising and expected.

“When she was young, she wasn’t a ‘girly-girl.’ She didn’t wear frills or flowers,” her mother Annie told the Inquirer after Peters’ coronation in the 2017 Binibining Pilipinas pageant at Smart Araneta Coliseum in Quezon City, which ended early morning on Monday.

“But when she decides on something, she works hard for it. Look at her body,” Annie added, citing the figure which also won for Peters the Best in Swimsuit award.

Aside from inheriting the title from Maxine Medina, the 25-year-old entrepreneur from Camarines Sur was proclaimed Face of Binibini (Photogenic) and JAG Denim Queen.

The returning candidate, who finished in the semifinals in 2013, was also the Best in Long Gown and Bb. Cream Silk.

Former Miss Philippines-Air Chanel Olive Thomas from Nueva Ecija, who was earlier proclaimed Bb. Friendship and Best in National Costume, received the Bb. Pilipinas-Supranational crown from Joanna Eden, who finished in the Top 20 of the Miss Supranational pageant.

Fan favorite Charmaine Elima only managed to finish as first runner-up, while Kristel Guelos came from behind to snag the second runner-up position.

The Philippine Daily Inquirer is a media partner of the 2017 Bb. Pilipinas pageant.

Peters’ brother, Daniel, also attested to the dedication that his sister poured into her preparation for the pageant.

“She would come home after I’m already asleep, and would leave before I’d wake up. She just put her heart and soul into this and she deserves what she won tonight,” Daniel shared.

Peters’ blossoming into the queen that she has become was also witnessed by her boyfriend, Camarines Sur Gov. Migz Villafuerte, who came to support his queen for the live show.

“She used to be shy. But as the pageant came closer, I saw the transformation. She would not have won had it not been for that transformation,” Villafuerte told the Inquirer.

Peters’ road to the crown was not easy. It took a lot of convincing from her family and her mentors before she finally decided to give the Binibining Pilipinas pageant a shot, especially after placing fifth during her stint in the 2014 Miss World Philippines pageant.

“I kept bugging her to join. Initially she said ‘no.’ But we were persistent and she eventually got tired of begging off,” her mentor Rodgil Flores told the Inquirer.

Peters has a multicultural background coming from an interracial family based in London. She studied in Australia and later worked in Thailand. She finally settled in her mother’s homeland to build a career as a model, host and businesswoman.

Peters’ queenly attributes go beyond the physical. She also impressed the crowd with her winning answer to the crucial question-and-answer round of the competition.

When the European Union’s ambassador to the Philippines, Franz Jessen, asked what her message would be if she was given the chance to speak at the recently concluded Association of Southeast Asian Nations summit in Manila, Peters said: “I believe that one of our biggest problems that our country faces today is divisiveness—in politics, in religion and also in culture. And I believe that is something that is the same across the world. That is something that I want to address. I believe if people could learn to tolerate each other’s differences and respect each other’s opinions, then we will be a stronger nation and world.”

The response was punctuated by a thunderous applause from the audience inside the Big Dome, and instantly made her a shoo-in for the top plum. —WITH A REPORT FROM JUAN ESCANDOR JR.