I was in Tokyo with my family in September last year for six days, and we got to see places in and around the capital. Yet, the trip hardly gave us enough time to explore the city, thus the desire to visit it again in the future if there’s an opportunity.

That chance came early last month when I got invited to a familiarization tour sponsored by Odakyu Electric Railway Co., Ltd., one of the biggest and diversified companies in Japan based in Kanagawa Prefecture. The tour promised four days and three nights of wonder by experiencing a unique culture, gourmet and exciting attractions in Tokyo, Hakone and Yokohama.

Together with two other media people, I left Manila for Tokyo on board an ANA Airbus 380 and landed at Haneda Airport after a four-hour flight and was welcomed by Kazuyo Ikeda, our tour guide. A cold, nippy air greeted us as we got on a van that took us to the Hotel Century Southern Tower in Shinjuku for an overnight stay.

After checking in and stuffing up with a burger sandwich bought from a diner across the hotel, I jumped into bed. But not before setting the timer on the room phone. In Japan, you don’t want to be late for appointments. 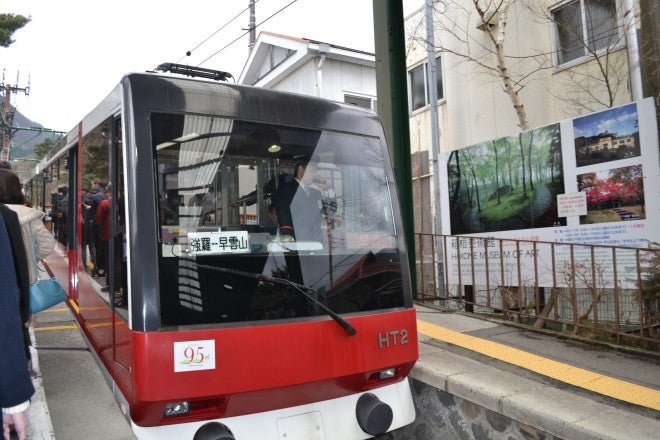 The second day began early with a 20-minute walk to the Shinjuku Station. We strode briskly to keep out the cold; the temperature was at 4 degrees Celsius. At the station, we boarded the Odakyu-owned and operated “Romance Train” to Hakone. 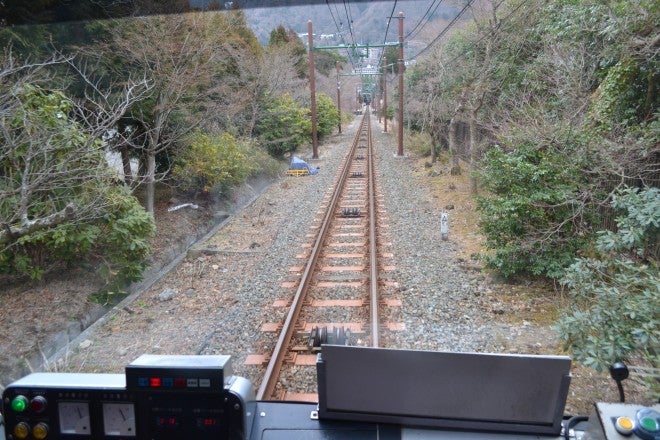 The 45-minute train ride took us past business and residential areas, past modern buildings and posh and traditional houses. After a while, the cityscape took on a rural ambience, as hillsides and mountains loomed on the horizon.

We arrived at the Hakone-Yumoto station at around 10 a.m. and got onboard another train bound for the sleepy mountain town of Goura. It was quite a ride, with the train doing a “back-and-forth motion” to navigate the ascent. We got to Goura 30 minutes later, then hopped onto a cable car for an uphill ride to Souunzan. The station was full of local and foreign tourists all suited up for the chilly morning.

I grabbed a seat at the end of the last coach so I had a full view of the uphill tracks we negotiated. Wow, it was steep. But I knew it was safe, knowing fully well how the Japanese are so gritty when it comes to safety. At Souunzan, we jostled with other passengers to get on a bus that took us to the mountain resort town of Owakudani, nestled some 1,000 meters on the slopes of a dormant volcano. Visitors immediately see sulfuric smoke emitting from various hot steam vents on the slopes. Our guide told us the acrid scent of sulfur is bad for people afflicted with respiratory diseases. But the hot vents are good for people who crave eggs. I will tell you why in a minute.

We had lunch at Curry Rice at the Owakudani hall. It was packed with diners, but Odakyu officials made sure we had seats by the window. The menu? Curry rice, of course. It was a simple meal, but it was good and tasty. After the brief lunch, we walked back to the main hall, getting buffeted by cold, crispy air made colder by the strong wind. The wind chill cut to the bone, so to speak, but I savored it considering the hot humid climate in Manila.

Now, back to eggs I mentioned earlier. One never leaves Owakudani without a bite of kuro tamago, the black hard-boiled eggs which are boiled in a pond of hot spring water. Iron properties in the hot spring water cling to the porous shell of the eggs, blackening them through a chemical reaction between geothermal heat and volcanic gases. The eggs inside actually tasted just the same as the hard-boiled eggs back home. There’s a local belief that eating kuro tamago gives one an additional seven years to his life. I bought and gobbled up two black eggs so that means I’ve gained 14 more years to my lifetime haha. 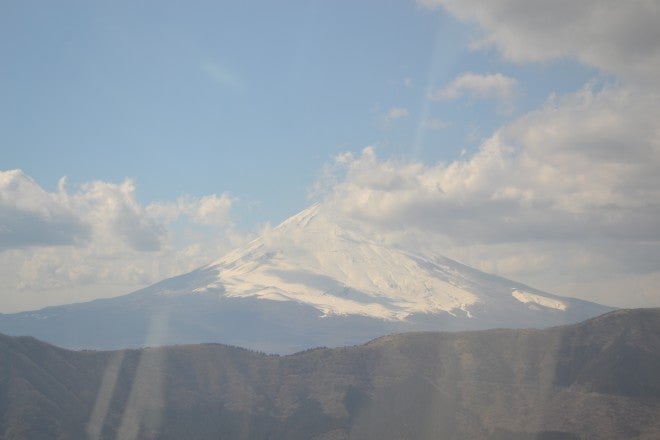 The tour got to high gear as we took a ropeway cable car to Togendai wharf. The 15-minute cable ride provided us with a spectacular view of Mt. Fuji, but its top was a bit covered by clouds at the time. Still, it was a sight to behold. 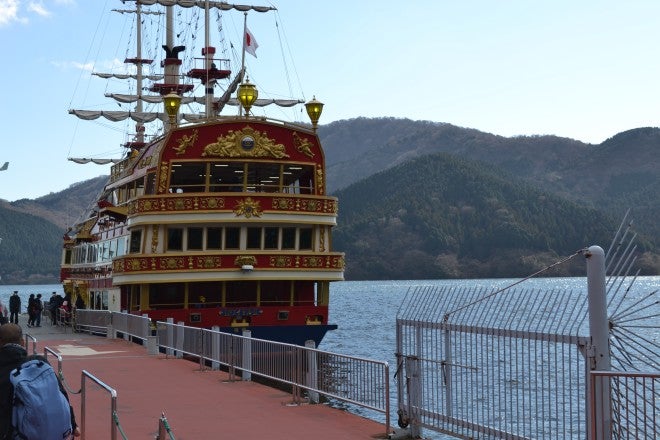 At Togendai, we boarded one of the three “pirate” ships to get to our next destination. It was a short ride over the cool waters of Lake Ashi, which was formed centuries ago when waters poured into a caldera left when the nearby volcano erupted. The ship docked at the MotoHakone Port; from there we got on a van that took us to Yamano Hotel, another hotel owned by Odakyu. It was a lovely place, and would be lovelier once the azalea plants that dot the façade are in full bloom around mid-April. Odakyu provided us with a wonderful treat through an apple pie tasting fare at the nearby Salon de the Rosage built just beside the lake. The pie a la mode was really good, one of the best I’ve tasted. But what made it extra special was the artistic way it was prepared by one of the restaurant’s staff, who happened to have a Filipino mother. It’s really a delight to see first-hand the artistic way Japanese food or snacks are prepared.

We retired to our rooms after dinner. I’d love to have tried the hotel’s open-air bath, but dared not because of the cold night. I went to bed, excited over what the next day’s adventure would be.

After a hearty breakfast, we got on an Odakyu staff car which took us to Enoshima, a small offshore island at the mouth of the Kasai River that flows into Sagami Bay. A bridge connects the island to the mainland, actually into Fujisawa in Kanagawa Prefecture. Enoshima is famous for one-day trips among the locals, offering them relief from the hustle and bustle of city life in Tokyo. It’s also a popular surfing town; surfers defy the wintry weather and cold waters by wearing thick surfing gear. 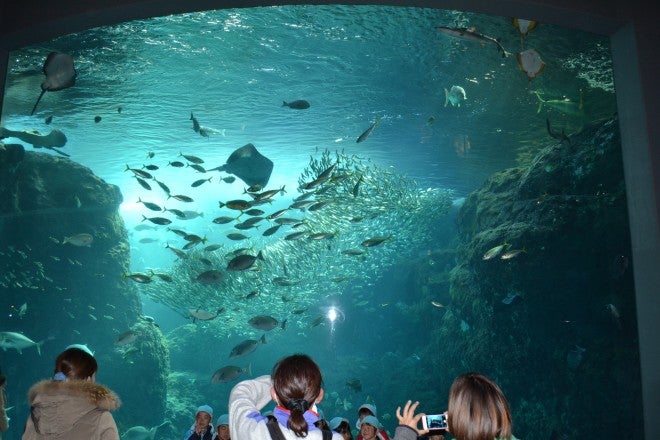 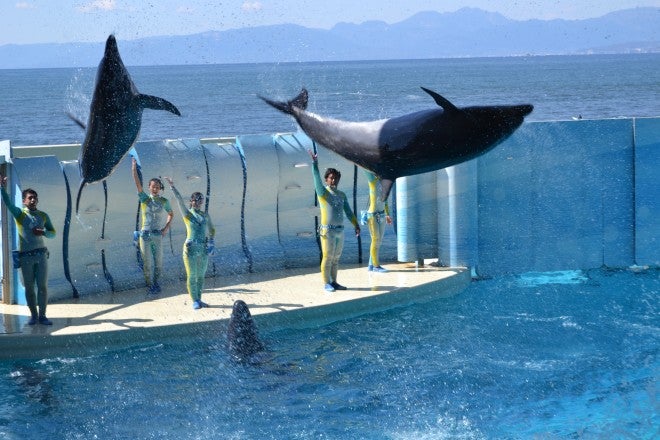 The tour started with a visit to Enoshima Aquarium in Fujisawa, which features, among others, a huge water tank that recreates Sagami Bay and the rich marine life it nurtures. It also boasts of a soothing jellyfish display and the world’s first biological display of baby sardines. The top attraction remains the dolphin show, with the wonderful mammals jumping out of the water, flipping over and executing summersaults on the air and doing other acrobatic acts. 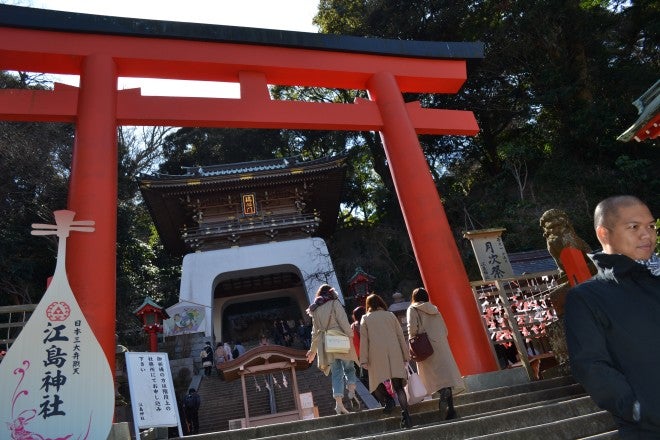 We had ramen for lunch (so tasty!) at a nearby restaurant, then off to Enoshima island. There, we visited the shrines and temples, offered prayers and prayed for our wishes to be granted. The shrines offer as well a panoramic view of Fujisawa and, again, Mt. Fuji. A visit to the Samuel Cocking Garden Enoshima Sea Candle, referred to as the lighthouse observation tower, gives visitors a more breathtaking view of Japan’s vastness. 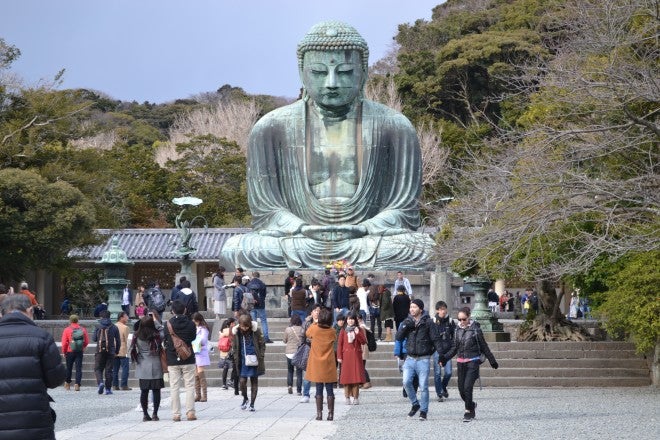 Next stop was the Enoshima Station where we boarded a small, classical train that runs through the “inner” sections of Enoshima and Kamakura. It was a scenic ride that took us past traditional houses built so near the tracks they seemed to touch the passing train. Then the scenery changed to a seaside view. We got off at Hase station, then walked to the famous treasure and symbol of Kamakura, the Hase Daibutsu or statue of Great Buddha. The statue is 11.3 meters high and weighs 121 tons.

We headed back to Shinjuku after that, feeling tired but fulfilled. I’ve never imagined to see so much in such a short time—actually just two days. Odakyu made sure the trip wasn’t like the usual travel tours that make tourists and travellers so pressed for time. The familiarization tour was, to say the least, well planned. Odakyu lived up to its promise of providing us with a wonderful and enriching experience.